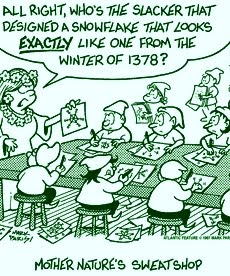 Mr. Humbug here. From the offices of Grinch Inc. comes the story about the nonphysics of commercial representations of snowflakes.

The fragile truce between science and art came under strain today when common depictions of snowflakes threatened to divide the two cultures over the festive season.

In the latest salvo between the warring factions, Christmas card manufacturers, advertising agencies and children's book publishers are accused of corrupting nature with "incorrect designer versions" of snowflakes that defy the laws of physics.

A letter to the prestigious journal Nature calls on scientists to take a stand against all images of four, five and eight-sided "faux" snowflakes.

Professor Thomas Koop, who specialises in ice crystal formation at the University of Bielefled in Germany, had turned a blind eye to the depiction of unnatural snowflakes until he noticed an octagonal one on Nature's own marketing website, captioned "... for anyone who loves science."

Koop decided to make his frustration known. "It bugs me," Koop told the Guardian. "It's the molecular building blocks that shape these crystals and they can't form any shape other than a hexagon."

In a letter to Nature, Koop points out that the hexagonal shape of snowflakes has been known for at least 400 years when Johannes Kepler, the German astronomer, published his mini-treatise on the subject, "On the six-cornered snowflake".

"Beautiful photographs abound, including those taken by Vermont farmer Wilson A Bentley starting in 1885 ... Why then do many artists invent their own physically unrealistic snow crystals?"

Snowflakes – or more accurately snow crystals – are famously unique, though Koop admits scientists cannot prove that no two alike have ever fallen to Earth. As different as they are, all have sixfold hexagonal symmetry. Snowflakes can be single crystals or larger agglomerations.

Snow crystals form when water vapour condenses into solid ice. Depending on the temperature and relative humidity, the ice crystal will grow into a hexagonal rod, a solid, flat plate, or a spectacular branched crystal. The symmetrical shape comes from the water molecules' hexagonal crystal lattice.

"We who enjoy both science and captivating design should aim to melt away all four, five and eight-cornered snow crystals from cards, children's books and advertisements, by enlightening those who unwittingly generate and distribute them," Koop concludes.


A snowflake--something special
Posted by Mercury at 1:31 PM