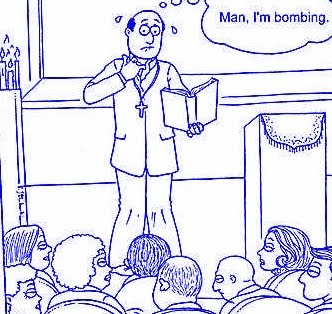 "Did You Hear the One About the Former Scientist?"

The New York Times
A biologist walks into a comedy club...

Actually, the story begins earlier. A biologist who had abandoned academia and was working in San Francisco on contract as a computer programmer for Charles Schwab walked into a Laundromat ...

The former biologist was Tim Lee. After completing his undergraduate biology degree at the University of California, San Diego, he worked at the Scripps Institution of Oceanography for a while before he realized he needed a doctorate to do the interesting work. But by the time he finished his Ph.D. at the University of California, Davis, he had realized he hated academia.

Dr. Lee then worked as a computer programmer, and he moved to San Francisco. During a vacation, he read memoirs of comedians like Bill Cosby, Bob Newhart and Jerry Seinfeld, and he wrote some jokes.

Then he walked into a Laundromat, which was holding an open microphone night for anyone who wanted to take a shot at being a comic. Dr. Lee told about a dozen jokes. Only four or five of them got laughs, but that was good enough for the host to offer some encouraging words.

Dr. Lee wrote more jokes. He went to more open mikes. He eventually got a paying gig — $35 from a comedy club in Santa Cruz, Calif. Along the way, he started telling science jokes, and he discovered that PowerPoint made a good comedy prop.

In the San Francisco Bay Area, Brian Malow, who calls himself “earth’s premier science comedian,” and Norm Goldblatt, a physicist who performs standup as a side gig, have been telling science jokes for years.

“It’s not as limiting as it sounds,” Mr. Malow said. “Science is in everything.”

Even so, Mr. Malow finds he sometimes needs to add footnotes. One joke he tells is, “I used to be an astronomer, but then I got stuck on the day shift.”

“That joke is kind of weird that way,” Mr. Malow said. “We have that traditional image of an astronomer. Astronomers should work at night, theoretically. It’s fun to say that.”

Mr. Malow said that he expected the science comedy field to grow. “That won’t be a niche at all,” he said. “That’ll be too broad. It’ll be, ‘I just do humor about the spleen.’ ”

Still, linear regression and ocean acidification are rarely fodder for standup, as they were for Dr. Lee in his New York City debut at a small venue called the Monkey in Gramercy last Wednesday, seven years after walking into the Laundromat. (He returns to New York this week for two more nights of shows at the Monkey.)

He joked about linear regression (a rumination about what kind of people post cat videos on YouTube), period doubling in chaos (which he likens to the splitting of behaviors of people as they become more and more drunk) and the Heisenberg uncertainty principle.

He explained this fundamental concept of quantum physics — that the more precisely the position of a particle is measured, the less is known about the particle’s momentum, and vice versa — with a photograph of a men’s room with television screens above the urinals. The designer “clearly didn’t understand the uncertainty principle,” Dr. Lee said.

“The problem is the more I know what’s on TV,” he went on, “the less I know about where I’m aiming.”

Dr. Lee said his first priority was being funny, not teaching science, but “hopefully people get the kernel of something.”

If humor, as some say, is truth plus absurdity, and if science is about uncovering truth, he said, “all I have to do is add absurdity to that.”

Not all science, however, is equally absurd. “I was trying to do matrix algebra jokes,” Dr. Lee said. “It’s never worked.”

Stephen Bodi, who had encountered Dr. Lee’s comic videos on YouTube (which have found moderate success with about two million views), went to Manhattan from Long Island to see him in person for the first time. “It’s very cerebral comedy,” Mr. Bodi said, “but it’s also very down to earth.”

The science training also came into use Wednesday when an audience member became overly boisterous, and then, when the bouncer asked for quiet, another spectator complained and called the police.

“There is a lot of thinking on your feet,” Dr. Lee said, not unlike when he defended his doctoral thesis. “That was good training for comedy. Unfortunately, I couldn’t call in the police for my thesis defense.”

A biologist walks into a comedy club. How does the story end? That stumped Dr. Lee, and he said he would think about it.

A couple of days later, he sent an e-mail message with this response: “A biologist walks into a comedy club. The owner asks, ‘Why’d you select this club?’ Biologist says, ‘Well, it was the natural selection.’ ”
Norm Goldblatt