Christmas and the X-Files 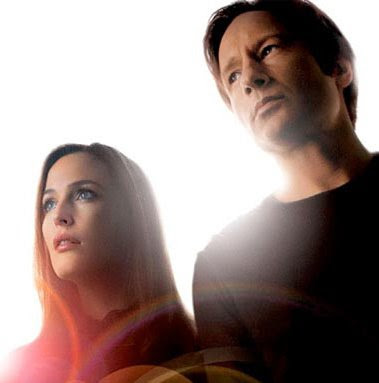 The X-FILES Christmas Case
"We're too late! It's already been here."

"Mulder, I hope you know what you're doing."

"Look, Scully, just like the other homes: Douglas fir, truncated, mounted, transformed into a shrine; halls decked with boughs of holly; stockings hung by the chimney, with care."

"You really think someone's been here?"

"Someone or some THING."

"Don't touch it! Those things can be lethal."

"It's O.K. There's a note attached: 'Gonna find out who's naughty and nice.'"

"Who? What are you talking about?"

"Ancient mythology tells of an obese humanoid entity who could travel at great speed in a craft powered by antlered servants. Once each year, near the winter solstice, this creature is said to descend from the heavens to reward its followers and punish disbelievers with jagged chunks of anthracite."

"But that's legend, Mulder -- a story told by parents to frighten children. Surely you don't believe it?"

"Something was here tonight, Scully. Check out the bite marks on this gingerbread man. Whatever tore through this plate of cookies was massive -- and in a hurry."

"It left crumbs everywhere. And look, Mulder, this milk glass has been completely drained."

"It gorged itself, Scully. It fed without remorse."

"But why would they leave it milk and cookies?"

"Appeasement. Tonight is the Eve, and nothing can stop its wilding."

"But if this thing does exist, how did it get in? The doors and windows were locked. There's no sign of forced entry."

"Unless I miss my guess, it came through the fireplace."

"Wait a minute, Mulder. If you're saying some huge creature landed on the roof and came down this chimney, you're crazy. The flue is barely six inches wide. Nothing could get down there."

"But what if it could alter its shape, move in all directions at once?"

"Exactly. Scully, I've never told anyone this, but when I was a child my home was visited. I saw the creature. It had long white strips of fur surrounding its ruddy, misshapen head. Its bloated torso was red and white. I'll never forget the horror. I turned away, and when I looked back it had somehow taken on the facial features of my father."

"I know what I saw. And that night it read my mind. It brought me a Mr. Potato Head, Scully. IT KNEW THAT I WANTED A MR. POTATO HEAD!"

"I'm sorry, Mulder, but you're asking me to disregard the laws of physics. You want me to believe in some supernatural being who soars across the skies and brings gifts to good little girls and boys. Listen to what you're saying. Do you understand the repercussions? If this gets out, they'll close the X-files."

"But that was a meteor shower."

"Officially. Two days ago, eight prized Scandinavian reindeer vanished from the National Zoo, in Washington, D.C. Nobody - not even the zookeeper - was told about it. The government doesn't want people to know about Project Kringle. They fear that if this thing is proved to exist the public will stop spending half its annual income in a holiday shopping frenzy. Retail markets will collapse. Scully, they cannot let the world believe this creature lives. There's too much at stake. They'll do whatever it takes to insure another silent night."

"The truth is up there. Let's see what's the matter."