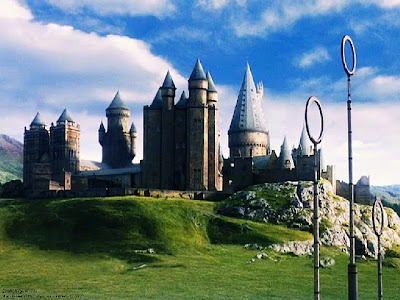 I was not aware of the extension of the realm of Harry Potter...an academic Hogwarts? What are the universities trying to accomplish? Frankly, this is absurd.

"Taking the Magic Out of College"

The New York Times
I DRINK in the tour guide’s every word as he shows my group around Middlebury College’s campus. He tells us about the school’s new science building and gives us the scoop on nearby ski mountains. Dreamily, I imagine my future self: a year older, strolling to class past this very same scene. I’m about to ask about science research opportunities when he points to a nearby field and mentions the sport students play there: a flightless version of J. K. Rowling’s Quidditch game — broomsticks and all.

Back when I was a junior, before I’d printed off an application or visited a campus, I had high expectations for the college application process. I’d soak up detailed descriptions of academic opportunity and campus life — and by the end of it, I’d know which college was right for me. Back then, I knew only of these institutions and their intimidating reputations, not what set each one apart from the rest. And I couldn’t wait to find out.

So I was surprised when many top colleges delivered the same pitch. It turns out, they’re all a little bit like Hogwarts — the school for witches and wizards in the “Harry Potter” books and movies. Or at least, that’s what the tour guides kept telling me.

During a Harvard information session, the admissions officer compared the intramural sports competitions there to the Hogwarts House Cup. The tour guide told me that I wouldn’t be able to see the university’s huge freshman dining hall as it was closed for the day, but to just imagine Hogwarts’s Great Hall in its place.

At Dartmouth, a tour guide ushered my group past a large, wood-paneled room filled with comfortable chairs and mentioned the Hogwarts feel it was known for. At another liberal arts college, I heard that students had voted to name four buildings on campus after the four houses in Hogwarts: Gryffindor, Ravenclaw, Hufflepuff and Slytherin. Several colleges let it be known that Emma Watson, the actress who plays Hermione Granger in the movies, had looked into them. I read, in Cornell’s fall 2009 quarterly magazine, that a college admissions counseling Web site had counted Cornell among the five American colleges that have the most in common with Hogwarts. Both institutions, you see, are conveniently located outside cities. The article ended: “Bring your wand and broomstick, just in case.”

I’m not the only one who has noticed this phenomenon. One friend told me about Boston College’s Hogwartsesque library, another of Colby’s “Harry Potter”-themed dinner party. And like me, my friends have no problem with college students across the country running around with broomsticks between their legs, trying to seize tennis balls stuffed into socks (each one dubbed a snitch) that dangle off the backs of track athletes dressed in yellow. Hey, college is all about experimentation, isn’t it?

In fact, most of us have grown up adoring Harry Potter and, through J. K. Rowling’s books, we’ve escaped many times into the world she created. But what I enjoy in fiction I don’t necessarily want to find in college. And, despite any wishes to the contrary, the real-life skills I hope to gain from college do not include magic.

What really matters to me as I prepare to make my decision? Well, I loved hearing about Williams College’s two-student classes called tutorials, and how Swarthmore lets students weigh in on almost every big decision made by its administration. I was really impressed by Middlebury’s student-driven campaign to save energy on campus. (For the sake of full disclosure, I just might be applying to some of these schools.) I care about diversity and need-blind financial aid — and, of course, the social life. But I don’t care about what percentage of the student body runs around on broomsticks.

Leaving home and beginning life in a new place is a nerve-racking experience, and nothing seems more reassuring than imagining that college will be the realization of a fantasy world I’ve been imagining since childhood. Obviously colleges have picked up on this. But they’re trying too hard. They’re selling the wrong thing. And my friends and I won’t be fooled. After all, Harry Potter is frozen in high school, and we’re growing up.

Lauren Edelson is a senior at the Catlin Gabel School.
Posted by Mercury at 2:11 PM

It's called 'marketing' and we as a society can not seem to escape from the Big Brother eye who specializes in the 'science of selling' as viewed through the eyes of psycho-babble research interpreters. One size fits all. Demand and supply!
Let's hope that Lauren Edelson is as smart after going to college as she appears to be before going to college. Or will she end up like Bill Gates, the richest person in America - a college drop-out?

Marketing or not, it is just silly and dilutes the needed bifurcation between high school and academic life. For me I could not wait to remove myself of the confines and surroundings of high school and tread into a new sphere of learning experiences. If this is going to be the trend, maybe the theme should change each year.

I don't think Ms. Edelson will have any problems...as she said "After all, Harry Potter is frozen in high school, and we’re growing up."

and colleges, like it or not, are fully functioning businesses, with all the pros and cons. Buyer beware.

You bet it is a business especially in the sciences where private, corporate, and government grants can be obtained. There is money and prestige to be gained.