A "blue moon" on December 31st...literally 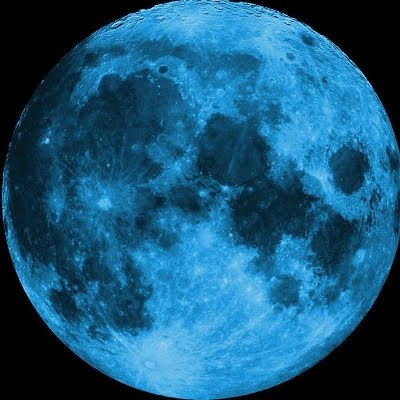 This is truly a rare occasion for on December 31st there will really be a "blue moon".

Moon Daily
When you hear someone say "Once in a Blue Moon " you know what they mean. They're usually talking about something rare, silly, and even absurd. After all, when was the last time you saw the moon turn blue? Well, rare or not, we're having one this month, and according to astronomer David Reneke from Australasian Science magazine, it's going to happen on New Year's Eve!

It's not at all clear where the term 'Blue Moon' comes from. It dates back at least 400 years. According to modern folklore, a Blue Moon is the second full moon in a calendar month.

"Usually months have only one full moon, but occasionally a second one sneaks in", David said. "Earlier cultures around the world considered the second full moon to be spiritually significant."

Full moons are separated by 29 days, while most months are 30 or 31 days long; so it is possible to fit two full moons in a single month. This happens every two and a half years, on average. By the way, February is the only month that can never have a Blue Moon by this definition. This month features full moons on December 2 and December 31.

Does the blue moon actually turn blue? No. Blue moons are rare, and that's where the phrase comes from, "once in a Blue Moon".

There are occasions though when pollution in the Earth's atmosphere can make the moon look particularly bluish. The extra dust scatters blue light.

For example, the Moon appeared blue across the entire Earth for about 2 years after the eruption of Krakatoa in 1883.There were also reports of blue moons caused by Mt. St. Helens in 1980 and Mount Pinatubo in 1991.

"A New Year's Eve like this year's one really does come around once in a blue moon," David said. "Look up at the sky on December 31 and see for yourself." For the first time since 1990, revellers will be able to ring in the New Year under the light of a Blue Moon. The next blue moon to occur on New Year's Eve will not happen until 2028.

"Blue Moons don't have any real significance scientifically but they're fun to look at," David said. Anytime you can get people out to look at the real sky to me is a great plus, enjoy it while you can this New Year's Eve."
Posted by Mercury at 4:22 PM