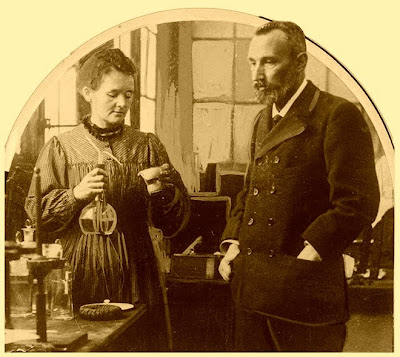 Supposedly, this is the day for the declaration of the discovery of radium even though the official date is December 26th.

Wired
Sorbonne-bred physicist Pierre Curie had been noodling with crystals and magnetism since the early 1880s. He was a professor at the School of Physics in Paris when one of his students, Marie Sklodowska, caught his eye. They wed in 1895, and theirs was both a happy marriage and a fruitful professional collaboration.

A colleague of the Curies, Henri Becquerel, paved the way for their groundbreaking research with his discovery of spontaneous radioactivity in 1896. With the rest of the scientific community going gaga over Wilhelm Roentgen’s recent discovery of X-rays, Becquerel’s presentation to the Academy of Sciences aroused little interest. However, Marie Curie, casting about for a potential doctoral thesis, took note.

Dragging Pierre away from his crystals, Marie got the ball rolling on what would be the central pillar of their life’s work.

Following on Becquerel, the Curies succeeded in isolating element 84, polonium (named for Poland, the country of Marie’s birth), and then element 88, radium. It was Marie, in particular, who devised a method for separating radium from its radioactive residues, making possible the closer study of its therapeutic properties. This would remain a lifelong interest of hers.

The Curies and Becquerel shared the 1903 Nobel Prize for Physics for their associated research involving what the Nobel committee referred to as the “radiation phenomena.” Thus, Marie Curie became the first woman recipient of a Nobel Prize, nosing out Bertha von Suttner (Peace) by two years.

As for Pierre, his satisfaction over winning a Nobel was short-lived. He was killed in an accident on a Paris street in 1906. Marie continued with their work, taking over her husband’s position as professor of general physics on the Faculty of Sciences, then becoming director of the Radium Institute’s Curie Laboratory at the University of Paris in 1914.

Marie Curie received a second Nobel Prize in 1911, this time for Chemistry. She spent the rest of her life in science, much of it promoting the healing properties of radium. In 1929, five years before her death, Curie founded a radiation laboratory in her native Warsaw.

One of the Curie daughters, Irene, later became a Nobel recipient as well, also in collaboration with her scientist-husband.

Curium, element 96, is named in honor of Pierre and Marie Curie. Francium, element 87, is named for France, site of the Curie Institute where it was discovered.

The curie is the international unit of measurement for radioactivity. Although originally defined as the radioactivity of 1 gram of pure radium, it is now specified as 3.7 x 10^10 atomic disintegrations per second, or 37 gigabecquerels.


Eve [Labouisse] Curie on radio
Posted by Mercury at 2:42 PM