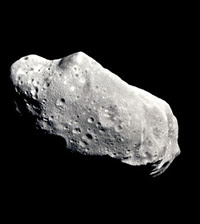 Did I miss the latest issue of comic book Fools In Space?

"Russians to Save World From Killer Asteroid With ‘Laws of Physics’"

ChattaBox.com
The Russians are coming, the Russians are coming—to save us from impending doom. According to Russia’s space agency chief, the Russians have their eyes firmly planted on the rogue asteroid Apophis, which missed crashing into Earth during its first voyage towards our planet. But now the asteroid has just a four-in-a million chance of hitting Earth. Still, the Russians believe our planet may be in peril from Apophis in 2030 and they don’t intend to sit idly by and wait to be obliterated by a massive space rock.

Anatoly Perminov, the head of Russia’s space agency, revealed his plans during an interview with the Voice of Russia radio, promising to save the world from Apophis, about twenty-years in the future. Perminov said that no nuclear bombs would be used to deflect the killer 850-foot asteroid, but didn’t rule out bombs altogether. The space chief said that “no nuclear explosions” would be used and that the deflection would be accomplished “on the basis of the laws of physics.”

Perminov intends to launch a spaceship to deal directly with Apophis, but he does not intend to destroy the asteroid.

Despite the slim to none chance of Apophis crashing into Earth, Perminov declared that the asteroid “will surely collide with the Earth in the 2030s.”

Of course saving the world from asteroids using “the laws of physics” doesn’t come cheap, but Perminov believes the cost is worth it. “People’s lives are at stake,” said the Russian space chief. “We should pay several hundred million dollars and build a system that would allow to prevent a collision, rather than sit and wait for it to happen and kill hundreds of thousands of people.”

The man may have a point.
Posted by Mercury at 9:27 PM

this is good. get in some practice before they hit New York. some trial run through, setting up "God Rods"