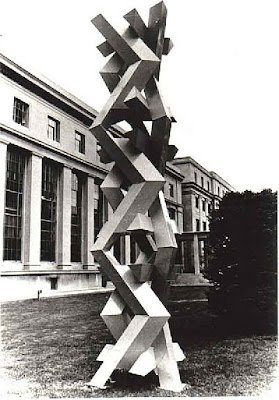 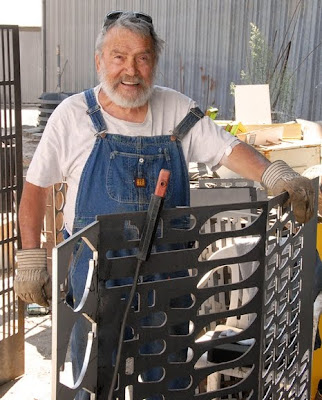 "Peter Forakis, a Sculptor of Geometric Forms, Dies at 82"

The New York Times
Peter Forakis, a sculptor of geometric forms and a founder of Park Place, a dynamic New York artists’ cooperative gallery of the 1960s, died on Nov. 26 in Petaluma, Calif. He was 82 and lived in Petaluma.

His death was announced by the Togonon Gallery in San Francisco, which has represented him since 2007.

Mr. Forakis was one of many young artists in the late 1950s and early ’60s who took up geometry as a way to avoid the omnipresence of Abstract Expressionism. He had arrived in New York in 1958 after earning a bachelor of fine arts degree from the California School of Fine Arts (now the San Francisco Art Institute). Over the next few years he went from concentrating on painting to making sculptures, just as geometry was becoming a force in both mediums. In 1963 a group that included Mr. Forakis, Mark di Suvero, Robert Grosvenor and Forrest Myers started exhibiting work, playing free jazz and discussing the future of public sculpture in a floor at the top of a loft building in Lower Manhattan near Park Place, where several of the artists lived. The first director of the cooperative space was John Gibson, who would later have a gallery of his own.

However geometrically inclined, these artists avoided the simple, stable shapes of Minimalism. Their best-known member, Mr. di Suvero, favored open structures of tilted and balanced beams, objects and forms. His Park Place colleagues worked with and against his influence, usually with more streamlined forms or brighter colors.

Often consisting of repeating, flattened volumes tilted on a corner, Mr. Forakis’s work had a mathematical demeanor; sometimes it evoked the black, chunky forms of the Minimalist sculptor Tony Smith.

Park Place closed in 1967. A year later its second director, Paula Cooper, opened her own gallery on Prince Street in SoHo, and for a time represented a few Park Place artists.

In addition to Park Place, Mr. Forakis had New York solo shows in the 1960s at the Brata Gallery, the David Anderson Gallery and the Tibor de Nagy Gallery. In 1966 his work appeared in “Primary Structures,” an important exhibition of geometric sculpture at the Jewish Museum.

Born in Hanna, Wyo., to Greek immigrants, Mr. Forakis grew up in California, living in Oakland and Modesto. He served in the merchant marine from 1949 to 1950 and in the military in Korea from 1951 to 1953 before pursuing a fine arts degree in San Francisco. He returned to Northern California in 1979. His last New York show was at the Max Hutchinson Gallery in 1982.

He is represented in several public collections and numerous commissions in Atlanta; Denver; Oakland; Nyack, N.Y.; and elsewhere. In 2008 his work was included in “Reimagining Space: The Park Place Gallery Group in 1960s New York” at the Blanton Museum of Art at the University of Texas in Austin.

Mr. Forakis’s marriage to the artist Phyllis Yampolsky ended in divorce. He is survived by a daughter, Christina Forakis of Sacramento, who is the child of an earlier relationship; and by two children from his marriage to Ms. Yampolsky: Gia Forakis of New York City and Jozeph Forakis of Milan.

I shall miss you so...
But Heaven calls the angels home
Rest in peace my wonderful friend.

Dear Sir,
Thank you for posting this.
How did you know my father?
You & your readers might be interested to see his website, which for now has less than 10% his total output (he was very prolific!) but we will be adding to it soon, so please keep checking back.

Dear Sir,
Thank you for posting this.
How did you know my father?
You & your readers might be interesting to view his new website, which for now has less than 10% of his total output (he was very prolific!) , but we will be adding more soon so please keep checking back.

I met Peter just before he left the Grange. He was so very kind and such a flirt. He shared with me so much about the pleasure of work and his history, reminding me that is it a privilege to be an artist. He told me about his parents, and how they came to the U.S. We talked about the Art Institute, Joan Brown, Paul Desmond playing at openings. The nano, casting, drawing, painting, copying rembrandt, painting more, paint more canvasses. Japan drier. He was such a dear, and so sweet and so funny and so ribald, never missing an opportunity. I loved haning with him on the river at van Bieber brothers. He once sold a figure drawing of a "well-endowed" women I gave him, but added a Clairol head, and cut out hands with claws, for gas money. The friend that bought it later got mad, thinking it was a drawing Peter had done, when the guy didn't even read on the bottom, "To Peter with Love, Janet"