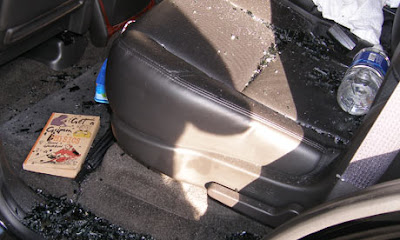 guardian.co.uk
It's been a terrible week for Tiger Woods, but the golf star's moment of madness at the steering wheel has brought a surge in sales for a book written by a science writer teaching at Sussex University.

A series of pictures released by Florida police of Woods's wrecked SUV includes a shot of the back seat, complete with waterbottle, towel and furled umbrella. But there among the shards of tinted glass in the footwell sits a well-thumbed copy of a paperback with the golf-appropriate title clearly visible: Get a Grip on Physics.

This incidental role in Woods's domestic drama has been enough to create a rush to get hold of the book, with the title's sales rank on Amazon.com jumping from 396,224 earlier in the week to a high spotted yesterday by the Wall Street Journal of 2,268.

Speaking in a break between lectures this morning, the author, John Gribbin, said he was "delighted that anyboy's reading my books. I just wish it was one that's still in print."

Part of a planned series on subject areas which was cancelled after poor sales, Get a Grip on Physics is an illustrated introduction to modern physics first published in 1999 which tells the story of developments in physics since the 1950s, charting the discovery of the four forces of nature, the search for grand unified theories and the beginnings of string theory.

"It's not a book you sit down and read from cover to cover," said Gribbin, "you can dip in and out of it. Tiger Woods is absolutely my target audience. He's busy, hasn't got a lot of time, but wants to catch up on what's happening in physics."

Publishers are becoming increasingly familiar with rapid rises in book sales, though the spikes are more often associated with US presidents. Barack Obama has already sparked a rush on sales of Joseph O'Neill's Netherland and Jonathan Alter's The Defining Moment, but he is following in the footsteps of Bill Clinton and John F Kennedy, who set off a stampedes for titles by Walter Mosley and Ian Fleming.

Gribbin has yet to see a rise in sales on Amazon.co.uk, where the book was languishing at a ranking of 71,115 this morning (perhaps because it was published in the UK under a different title: Get a Grip on New Physics), but he's hoping that Tiger Woods may graduate onto his other works.

Best known for In Search of Schrödinger's Cat, an exploration of the mysteries of quantum physics still selling well 25 years after it was first published, Gribbin has amassed a back catalogue which ranges widely over modern science. His latest book is In Search of the Multiverse, which charts ideas about alternative realities from Hugh Everett's many-worlds interpretation of quantum mechanics to recent developments in M-theory pointing to a landscape of alternative universes in string theory.

"Perhaps Woods will see if he can find a universe in which none of this ever happened," suggested Gribbin. 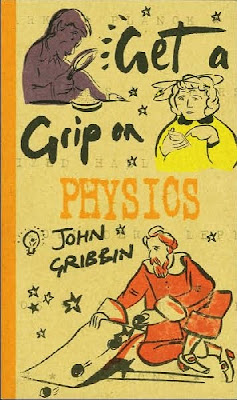 Get a Grip on Physics

I have read many of John Gribbin's books, and have liked them all. This is by far the most general and basic of his books that I've read, but it is still wonderful. It is great for general audiences, and is suitable for adults and older children. He describes the basics of physics from early developments through the latest subatomic particle discoveries and string theory, so for such a small book, it covers a lot of area, without the mathematical rigor of a typical physics text.

On page 41 he discusses electromagnetic relationships, and has one of the most easily comprehensible explanations (and illustrations) that I have seen for this basic physical phenomenon. In his discussion of the speed of light, he explains the basics of Einstein's insights in a comprehensible manner that clarifies basic relativity well for beginners, though he does make a minor mathematical error on page 49.

I found his discussions of quantum physics very strong, with a great explanation of things like the famous "quantum leap" and atomic shell stability that is both accurate, and accessible to non-scientists while still being entertainingly written. I have always admired Ernest Rutherford's work, and was especially amused to see the inclusion of his famed quip about chemistry in his biography: "all of science is either physics or stamp collecting," this despite winning the Nobel Prize for chemistry (which he always regarded as an inferior academic discipline to physics.)

As the book gets further into the modern era, needless to say, the subjects get tinier and stranger. Gribbin covers the wackiest of subatomic particles (quarks, antiquarks, leptons, pions, glueballs, tauons, etc.) well, and excels in his basic introduction to string theory, the Schrödinger's Cat paradox, quantum uncertainty, compactification, black holes, superfluidity, and other oddities of the physical sphere. He pays more than a mention to Richard Feynman (although the terrible likeness of Feynman on page 145 makes him look more like the lead singer from "Night Ranger" than the eccentric physicist we know an love.) Feynman was one of the most brilliant men who ever lived, and Gribbin believes, as I do, that he was at least on par with Einstein, and possibly even more insightful.

This is a great introduction to physics, but I only gave it four stars for purely physical reasons (sorry about the pun.) The book is printed on unbleached, recycled paper, which is rather dark brown, and is sometimes a big strain on the eyes to read; likewise, the small sections are sometimes chopped up and illustrations are inserted in awkward places, making it more difficult to read than it would otherwise be. I do like the illustrations, and think the biographies and fact boxes throughout help the reader immensely. This is a fine book, and I recommend it highly. I also recommend Gribbin's other books (which are somewhat more complex than this one), and highly recommend Feynman's books as well.
Posted by Mercury at 5:38 AM

go away Tiger....while i celebrate the physics this is such a sad statement of our interests for information. it is said we do not know enough about science and yet there is a ton of lectures out there via the internet if the public would only change its hunger for real information....

Funny, I figured Tiger was far more interested in getting a grip on something other than physics.