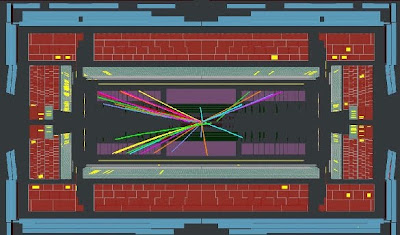 The switch was closed and behold the Earth is still here. Competition is good and the LHC's protons' energy levels reach 1.2 trillion electron volts per proton. Fermi's Tevatron was left in the dust. Eventually the electron volt will reach 7 trillion.

Late Tuesday night, tiny spitfires of energy blossoming under the countryside outside Geneva heralded the arrival of a new European particle collider as the biggest, baddest physics machine in the world.

Scientists said that the new Large Hadron Collider, a 17-mile loop underneath the Swiss-French border, had accelerated protons to energies of 1.2 trillion electron volts apiece and then crashed them together, eclipsing a record for collisions held by an American machine, the Tevatron, at the Fermi National Accelerator Laboratory in Illinois.

Officials at CERN, the European Center for Nuclear Research, which built the collider, said that the collisions lasted just a few minutes as a byproduct of testing, and that the Champagne was still on ice in Geneva. But in conjunction with other recent successes, those tiny fireballs displaced American physicists as the leaders in the art of banging subatomic particles together to see what nature is made of.

That future, physicists say, includes not just the sheen of announcing exotic particles and strange dimensions, but the ancillary rewards of increased technological competence and innovation that spring from the pursuit of esoteric knowledge. The World Wide Web, lest anyone forget, was invented by particle physicists at CERN. Detectors developed for physics experiments are now used in medical devices like PET scans, and it was the industrial scale production of superconducting magnets for the Tevatron that made commercial magnetic resonance imagers possible, said Young-Kee Kim, deputy director of Fermilab.

“Particle accelerators and detectors (initially with the bold and innovative ideas and technologies) have touched our lives in many ways and I have no doubt that this will continue,” she wrote in an e-mail message.

Those spinoffs now will invigorate the careers and labs of Europe, not the United States, pointed out Steven Weinberg, a physicist at the University of Texas in Austin, who won the Nobel Prize for work that will be tested in the new collider. Americans will work at CERN, but not as leaders, he said in an e-mail interview.

“There is also a depressing symbolism,” he added, “in the fact that the hottest new results in fundamental physics will for decades not be coming from our country.”

This moment has been inevitable ever since the fall of 1993, when Congress canceled a behemoth project in Texas known as the Superconducting SuperCollider, after estimated costs rose to $11 billion. That accelerator, designed at 54 miles and 20 trillion electron volts, would have been working by now and would have had an even greater reach for new physics than Europe’s machine. American physicists have reacted to the L.H.C. with a mixture of excitement, good sportsmanship and wistfulness.

The United States has not exactly been shut out of the action at the new collider, as Dr. Kim pointed out. It contributed $531 million to the project, and about 1,700 of the 10,000 scientists who work on the giant particle detectors in the collider tunnel are Americans, the largest of any national group (Italians are next).

Thanks in part to delays with the CERN collider and other problems that will keep it from performing up to snuff for the next couple of years, she said, Fermilab’s Tevatron is still in the lead in the hunt for one of the collider’s main quarries, the Higgs boson, a particle that is thought to imbue other particles with mass.

In the meantime, Fermilab is investing $53 million from the federal stimulus package in a “Project X” to make more intense proton beams, which in turn could be used to make beams of the strange ghostlike particles called neutrinos. The lab is also going into cosmology. Other physics labs, like Brookhaven on Long Island and the Stanford Linear Accelerator Center, or SLAC, have converted their accelerators into powerful X-ray sources, which can be used to plumb the properties and structures of molecules in work that led to this year’s Nobel Prize in chemistry.

For CERN, the Fermilab-topping collisions will be only the end of the beginning of a 15-year, $10 billion quest to recreate laws and particles that prevailed just after the Big Bang, when the universe was less than a trillionth of a second old.

Particle colliders get their magic from Einstein’s equation of mass and energy. The more energy that these machines can pack into their little fireballs, in effect the farther back in time they can go, and the smaller and smaller things they can see.

The first modern accelerator, the cyclotron built by Ernest Lawrence at the University of California, Berkeley, in 1932, was a foot in diameter and boosted protons to just 1.25 million electron volts.

CERN, a 20-nation consortium, grew from the ashes of World War II and has provided a template for other pan-European organizations like the European Space Agency and the European Southern Observatory. With a budget and dues set by treaty, CERN enjoys a long-term stability that is the envy of American labs. For decades, CERN and Fermilab leapfrogged each other building bigger and bigger machines, but the game ended when the supercollider was canceled.

Despite the lack of competition, CERN’s collider has not had a bump-free ride. In 2007 the housing around one magnet exploded during a pressure test, necessitating the removal and redesign of nine 80-foot magnet assemblies. In September 2008, the junction between two magnets vaporized, shutting down the project for a year.

Testing revealed that the collider is riddled with thousands of defective electrical joints and dozens of underperforming magnets that will keep it from reaching its full potential until an overhaul scheduled for 2011. When it starts doing real physics after the holidays, the collider will be running at half power.

The collider was designed to investigate what happens at energies and temperatures so high that the reigning theory of particle physics called the Standard Model breaks down. In effect, the new machine’s job is to “break” the Standard Model and give physicists a glimpse of something deeper and more profound.

The future of particle physics depends on whether the Large Hadron Collider finds anything.

If it yields nothing, in the words of CERN physicist, John Ellis, it would mean that theorists have been talking rubbish for the last 35 years. Actually, he used a stronger word.
Posted by Mercury at 4:44 PM