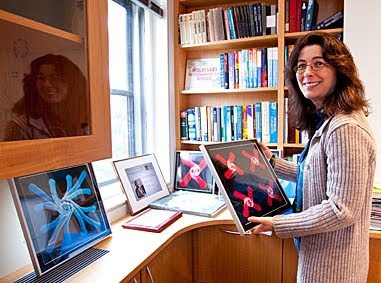 Harvard Gazette
Starting with bacteria and blue-green algae, nature has been busy making things for at least 3.5 billion years. The success and longevity of its processes make biology worth studying as a source of robust designs for new materials, nanotechnologies, and even new approaches to architecture.

“We look at what nature does so nicely, and try to mimic it in the lab,” said Joanna Aizenberg in a Radcliffe Fellows’ lecture Wednesday (Dec. 2).

The Moscow-trained researcher is Harvard’s Amy Smith Berylson Professor of Materials Science and a pioneering researcher in biomimetics, a branch of science that models new systems and materials on nature.

Her early inspirations, while she was a graduate student in Israel, included intricate sponges found in the Dead Sea. Their glassy superstructures, while seemingly delicate, easily withstood crushing pressures deep under water. And their crystalline surfaces gathered and focused light more efficiently than any man-made lens.

Aizenberg is also a professor of chemistry and chemical biology at Harvard’s Wyss Institute for Biologically Inspired Engineering. She explores biomineralization, the way that nature uses organic catalysts to prompt inorganic materials to “grow” into lenses, glass fibers, and other useful structures.

In the aptly named Aizenberg Biomineralization and Biomimetics Lab on Oxford Street, Aizenberg and her researchers are looking into the “self-assembly” of inorganic materials as nature might do: efficiently in surrounding temperatures.

Examples of biomineralization are everywhere, she said: the houselike structures that mollusks make, the glassy frameworks of marine sponges, ultra-hard mammalian teeth, and the calcium phosphate skeletons that give human bodies their shape.

Biomineralization sometimes goes awry — think kidney stones. But mostly it creates useful structures that in turn offer lessons on self-building secrets that are billions of years old. “Nature creates these shapes from the bottom up,” said Aizenberg.

Her lecture, in the Radcliffe Gymnasium, was illustrated with slides showing infinitesimal structures of astonishing beauty and complexity. Silica patterned on a nanometer scale looked like miniature hats, baskets, and stars. Winged oysters had mineral projections that resembled a crucifix. Spiky radiolarians (amoeboid protozoa) had mineral skeletons as varied as snowflakes.

Beauty is a constant feature of small-scale biology, said Aizenberg. Without aesthetics, she would not be interested in pursuing this scientific avenue. But within these lovely mineralized forms are examples of high functionality. The glass fibers framing those deep-sea sponges, for instance, are stronger and more optically efficient than anything humankind can make.

Aizenberg showed a picture of a whitish tapering glass sponge. Its crown of light-gathering optical fibers made it “a beacon deep in the ocean,” she said. And its multiple intersecting “beams” of glass provided lessons in robust building techniques that Aizenberg is sharing with architectural designers.

Studying how nature builds can illuminate construction on a grand scale (architecture) or a tiny one (nanotechnology fabrication).

To get at nature’s building techniques, Aizenberg looks at marine organisms called echinoderms, which include brittle stars and sea urchins. Their complex skeletons start as single crystals of calcite, a mineral that in its simplest form looks like a slanting cube.

It’s a disarmingly simple start for something as intricate as a marine skeleton, but “somehow nature knows how to grow these things in a bottom-up fashion,” said Aizenberg, who is also the Susan S. and Kenneth L. Wallach Professor at Radcliffe.

From a substrate of single crystals, the brittle star can grow lenslike spherical arrays that are on the micron-scale, pass light without distortion, focus light exceptionally, and as a bonus are terrifically strong mechanically. (Because of the brittle star, we now have bio-inspired arrays of tunable micro-lenses.)

Beyond lenses that gather and focus light, some echinoderms have pedicellariae, forcepslike structures in near constant motion that keep dust, sand, and unwanted micro-organisms from settling on the creatures. In a video that Aizenberg showed, the pedicellariae looked like earless snapping puppies.

To her team, these “environmentally responsive microactivators” suggest a future in which reactive synthetic skins could repel moisture or contaminants. Aizenberg is experimenting with tiny arrays of rigid structures, known as HAIRS, that rise or collapse, depending on environmental conditions.

HAIRS stands for Hydrogel Actuated Isolated Rigid Structures. Only twice as wide as a human hair, they can be made to change not only direction and height but color. They can also twist in the same direction on a nanometer scale, a function Aizenberg calls making “dreadlocks.” The braids of these nanoscale dreadlocks, in twisting and releasing, can capture or release drug doses, she said. They also have strong adhesive properties.

Tiny 3-D environments like this, modeled from nature, may someday make “adaptive architecture” possible. Aizenberg speculated on a building covering that repels rain or ice. Another could thin or thicken in response to temperature changes.

The same biomimetic architectural skins, she said, could also be made to change color — not only for aesthetic reasons but in order to expose flaws. (A crack, for instance, would appear as a separate color.)

Echinoderms use microscopic moving structures, the pedicellariae, to repel microorganisms. So someday bio-inspired materials could repel the annoying and even dangerous biofilms that tend to layer piping, medical instruments, and other man-made surfaces with bacteria.

There is a lot to learn from the tiny, eons-old creatures around us, said Aizenberg. At her Radcliffe talk, she summed up the secret to that learning: “stealing from nature.” 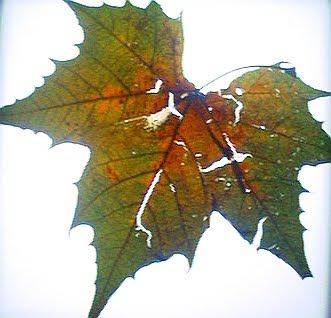 Sycamore
Posted by Mercury at 4:18 PM