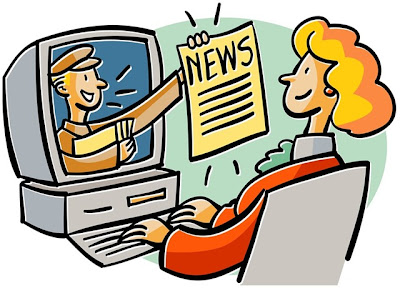 The Internet is heading for disaster if the news services peruse a policy of charging for news articles. It is bad enough for scholarly journals to charge per article or high subscription rates but this will be utter confusion and wasted money from users.

Okay, they want web sites and blogs that reference links to articles and the like and the readers will be forced to pay for such access and information. Would it not be fair for the bloggers and web site owners who post these links be given a percent of the fees charged? Fair is fair. And, can someone accurately define the word and meaning of "news"? This scream about "intellectual property" is a ruse to boost profits. How many times have the articles been incomplete and void of content. This is not good news at all. And what if one visits 50 news sources and pays an annual subscription rate of $50...not worth the investment.

guardian.co.uk
Google is to allow publishers of paid for content to limit the amount of free access internet users have to their websites from Google News.

Just yesterday, Murdoch accused online aggregators such as Google News of "theft" of content, speaking at a US media regulators' workshop on the future of journalism in the internet age in Washington.

Murdoch plans to put News Corp content, including from UK newspapers such as the Sun and the Times, behind a paywall and has threatened to remove it from Google's search index and Google News.

However, Cohen said publishers would be able to charge for their content and still make it available via Google following the changes announced yesterday. "The two aren't mutually exclusive," he added, on a Google News blog.

Cohen said Google had achieved this by updating its First Click Free programme, so that publishers can limit Google News users to looking at no more than five pages of content a day without registering or subscribing.

"If you're a Google user, this means that you may start to see a registration page after you've clicked through to more than five articles on the website of a publisher using First Click Free in a day ... while allowing publishers to focus on potential subscribers who are accessing a lot of their content on a regular basis," he added.

Cohen said that Google will also begin crawling, indexing and treating as "free" any preview pages – usually the headline and first few paragraphs of a story – from subscription websites.

"We will then label such stories as "subscription" in Google News. The ranking of these articles will be subject to the same criteria as all sites in Google, whether paid or free," he added.

"These are two of the ways we allow publishers to make their subscription content discoverable, and we're going to keep talking with publishers to refine these methods. After all, whether you're offering your content for free or selling it, it's crucial that people find it. Google can help with that."

It remains to be seen whether this will placate Murdoch, who told the US Federal Trade Commission workshop yesterday: "Producing journalism is expensive. We invest tremendous resources in our project from technology to our salaries. To aggregate stories is not fair use. To be impolite, it is theft.

"Without us, the aggregators would have blank slides. Right now content producers have all the costs, and the aggregators enjoy [the benefits]. But the principle is clear. To paraphrase a great economist, [there is] no such thing as a free news story."

Associated Press
Rupert Murdoch, News Corp.'s chairman and chief executive, sees a promising future for publishers that can adapt to the Internet age. Key to survival, he said, is giving consumers what they want, how they want it - be it on a computer, mobile device or e-reader - and then charging for it, as his company does with The Wall Street Journal.

"We need to do a better job of persuading consumers that high-quality, reliable news and information does not come free," Murdoch said. "Good journalism is an expensive commodity."

Murdoch's comments were echoed during the Federal Trade Commission's workshop, which explored the challenges facing media companies and ways the government can help them survive.

Newspapers, broadcasters and other traditional media companies are in distress as the growth of their online revenue has failed to keep pace with sharp declines in the offline advertising that has historically supported their operations.

The FTC holds periodic workshops on developments across a range of industries, from health care to targeted advertising. In the two-day journalism workshop that began Tuesday and concludes Wednesday, media executives came to discuss new business models and government officials sought ways they might protect a critical pillar of democracy - a free press.

"News is a public good," FTC Chairman Jon Leibowitz said. "We should be willing to take action if necessary to preserve the news that is vital to democracy."

Leibowitz stopped short of endorsing specific proposals, although he noted that government support for the media has precedent - such as with requirements that legal notices be printed in newspapers.

Also on the table is a proposed change in antitrust rules to allow newspapers to jointly negotiate payments from Web sites that use their content.

Many of Tuesday's speakers urged the government to remain on the sidelines, allowing the free market to weed out the publishers unable to evolve.

"The bold will survive and the timid will fail," said Chris Ahearn, president of media for Thomson Reuters Corp., which specializes in financial news and data.

Srinandan Kasi, general counsel for The Associated Press, also participated in Tuesday's session. The AP, a not-for-profit news cooperative founded in 1846, is experimenting with ways to increase its online revenue through a mix of advertising and higher fees imposed on Web sites that license its stories and photographs.

The FTC will hold more workshops in the spring to discuss the ideas that emerge this week in greater depth. It could offer legislative recommendations to Congress.

Many newspapers have been drawing up plans to charge people to read at least some of the stories on their Web sites. It's a radical shift from the main model for online news for the past 15 years, in which publishers mainly gave it away. That hasn't worked out because it has contributed to a sharp decline in readership of print editions - where ads generate about 10 times more revenue than Internet ads.

Journalism Online, a startup developing a payment system for newspapers and magazines, will start sending out its software next week so it can be tested during the final weeks of the year, said Steven Brill, Journalism Online's co-chief executive. He didn't identify which publishers are involved in the initial tests, saying only that more than 1,300 newspapers, magazines and blogs have signed letters of intent to use Journalism Online's system.

The industry is still debating the risks of charging for online material - it could just drive readers to the abundant free sources likely to remain. But in some cases, such as at The Wall Street Journal, online fees can pay off.

The 407,000 online subscribers that the Journal listed in its latest circulation report helped it overtake USA Today as the nation's top-selling newspaper. And if not for the online fees, the Journal would probably employ 280 to 290 fewer newsroom employees than it does today, said Robert Thomson, the Journal's managing editor.

"The Internet age cannot just be the triumph of amateur hour," Thomson said.


The shrinking Internet
Posted by Mercury at 6:48 AM

having anticipated this and a bit angry over Climategate i have discontinued feeds from Scientific American, Science Magazine and others. now my search engines are what i have left and msut prepare for the eventual, an inability to pay. i simply do not have the money. meanwhile, my taxes are paying to fund studies to understand why Chinese prostitutes engage in risky behavior while imbibing alcohol.

Once again the non-wealthy will be at a disadvantage.

I certainly hope that someone or a grassroots movement will challenge this unfortunate move towards a restriction of information.

A national tragedy or emergency and individuals wish to gather the latest information and are scanning the Internet for current updates and the allocated five free hits at a news service are exhausted...then what? Select another source and use up the freebies and so on until all news sources are exhausted. Is ignorance bliss?