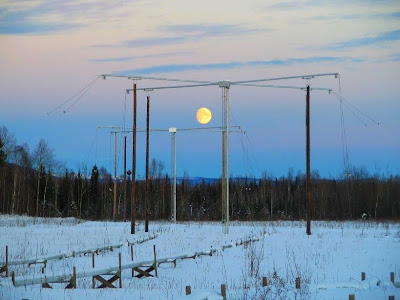 Fairbanks, Alaska has been the host for UCLA's use of HIPAS Observatory for the study of the aurora borealis and is now shut down.

The Associated Press and Alaska's Fairbanks Daily News-Miner reported Sunday on the closure the HIPAS Observatory in Fairbanks, which had been used by the UCLA Department of Physics and Astronomy to conduct research on the aurora borealis. Glen Fichman, UCLA senior campus counsel, was quoted in the coverage; Alfred Wong, UCLA professor emeritus of physics and astronomy and former director of the observatory, was cited in the Daily News-Miner.
"HIPAS aurora science station outside Fairbanks is shut down"

newsminor.com
FAIRBANKS — After spending a quarter-century accumulating astronomical equipment in Two Rivers, of all places, the UCLA physics department plans to spend this year doing a little housecleaning.

The Los Angeles-based university has shut down the HIPAS Observatory, a remote site it maintained at 26 Mile Chena Hot Springs Road that was used for atmospheric research.

When HIPAS was a functioning observatory, it boasted an inventory of exotic-sounding equipment that UCLA said made it “one of the best locations for the observation of the aurora borealis.”

A one-megawatt transmitter could produce extremely low-frequency electromagnetic waves, and a 2.7-meter liquid mirror telescope was on site with a half-dozen lasers for “ionospheric stimulation and measurement.” A plasma torch was used for research on the destruction of hazardous waste, along with an incoherent scatter radar for studying the ionosphere. A pair of diesel generators provided power for experiments.

UCLA Senior Counsel Glenn Fitchman said the university is in the process of selling its inventory at Two Rivers, although he didn’t have details about what specific equipment remains at HIPAS and what is being sold.

“This is a very slow process of taking down the site,” Fitchman said. “A lot of stuff has accumulated over time.”

The HIPAS Observatory was mothballed when its director moved into semi-retirement last year, Fitchman said, and no researchers have been stationed there for a year or longer. UCLA has leased the site from the University of Alaska since 1986.

HIPAS — the acronym stands for High Power Auroral Stimulation — was used for experimental research on the aurora borealis, energy conduction in the ionosphere and high-power radio transmissions. The observatory had four permanent staff members, according to UCLA officials.

Fitchman said retired UCLA professor Alfred Wong, the former director of HIPAS, has stepped down and funding for his research has dried up. He said that the University of California isn’t interested in pursuing Wong’s research, so HIPAS is being closed.

HIPAS occasionally made news as the site of unusual ionospheric research. Part of its research included directing electrical energy into the ionosphere, allowing the observatory to study its effect on the aurora.

In 2006, Wong told the American Geophysical Union that he planned an experiment at HIPAS to direct carbon dioxide into outer space, which could be a possible aid in curbing global warming. Wong wanted to try to carry negatively charged carbon-dioxide particles out of the atmosphere, using the earth’s magnetic field as a conveyor.

Wong didn’t return messages to comment on his research or the closure.

The UCLA Physics Department Web site describes the HIPAS Observatory as a 120-acre site with six buildings, including a bunkhouse for visiting researchers. The UAF lease terms describe it as a 130-acre site.

The HIPAS Observatory had a similar research role as the High frequency Active Auroral Research Program, or HAARP, which is located near Gakona. The two Alaska facilities, along with the Arecibo Observatory in Puerto Rico, were the only ionospheric research sites operated by the U.S. government, according to the HAARP Web site.

UCLA was paying $10,000 per year to UA for the HIPAS lease, which has come to an end. UA spokeswoman Kate Ripley said there are no immediate plans for the facility.

You can read about HARP here...