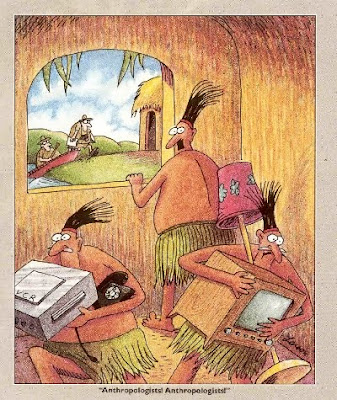 "Should Anthropologists Go to War?"

Time
Anthropologists have traditionally had a pretty wonkish reputation, earnestly taking field notes while interviewing a tribal chief or lecturing in some college classroom about the intricacies of indigenous clan-systems. If the Pentagon has its way, though, more anthropologists will exchange their tweed for military fatigues and leave the halls of academe for the front lines. For the past two years, the U.S. military has embedded anthropologists and other social scientists with American troops in order to improve the Army's cultural IQ. But last week the American Anthropological Association (AAA) released a report coming out strongly against the program, saying that in both concept and application, it "can no longer be considered a legitimate professional exercise of anthropology."

Since 2007, the Pentagon's Human Terrain System (HTS) has been placing social scientists in every Army combat brigade, regiment and Marine Corps regimental combat team. There are now more than 500 people employed by HTS, a number that is increasing rapidly. On the ground in Iraq and Afghanistan, their job is to gather information and provide commanders with a greater understanding of the local population, reducing the need for lethal force by helping the Army determine the needs of the community, according to Steve Fondacaro, the project manager at HTS. Secretary of State Robert Gates has publicly praised the project, and an Army colonel told Congress that one Human Terrain team reduced violent clashes encountered by his brigade in Afghanistan 60% to 70%. As President Obama revamps his Afghanistan strategy, getting ready to send 30,000 additional soldiers, HTS is poised to become a major part of America's war, helping troops navigate in a foreign land. "We're pleased to find ourselves fully aligned with the goals [of the Obama Administration]," says Fondacaro.

But if the military's program is to continue its expansion in Afghanistan with the nation's top scholars, it may be facing an uphill battle. The AAA says the program violates its code of ethics — a sort of Hippocratic oath in which anthropologists vow to do no harm. Two years ago, the AAA condemned the HTS program, but this month's 72-page report goes into much greater detail about the potential for the military to misuse information that social scientists gather. Some anthropologists involved in the report say it's already happening. David Price, a professor of anthropology at St. Martin's University in Washington state and one of the co-authors of the AAA report, says the Army appears to be using the anthropological information to better target the enemy — which, if true, would be a gross violation of the anthropological code. One Human Terrain anthropologist told the Dallas Morning News that she wasn't worried if the information she provided was used to kill or capture an insurgent. "The reality is, there are people out there who are looking for bad guys to kill," she said. "I'd rather they did not operate in a vacuum." Price and other critics see this as proof that the anthropologists don't have full control over the information they gather and that commanders can use it to kill. "The real fault with Human Terrain is that it doesn't even try to protect the people being studied," says Price. "I don't think it's accidental that [the Pentagon] didn't come up with ethical guidelines."

HTS adamantly denies that its program is designed to help the Army improve its targeting, saying on its website that the role of the program "is neither to directly assist in lethal targeting of insurgents nor the collection of actionable military intelligence." But Ben Wintersteen, who recently finished the nearly five-month HTS training program and has a master's in anthropology, says oversight is lacking. Once on the battlefield, "there's definitely an intense pressure on the brigade staff to encourage anthropologists to give up the subject," Wintersteen says. "There's no way to know when people are violating ethical guidelines on the field."

Still, Wintersteen, who is waiting to be sent to Iraq through HTS, says the AAA's decision to attack the program will ultimately put more lives in danger by undermining the organization's ability to provide guidance and dissuading top talent from joining. So far, HTS has struggled to bring in topflight social scientists with regional knowledge. "It hurts HTS and the people downrange like the American soldiers and the locals who depend on the rational analysis that anthropology brings," Wintersteen says. In his training class of about 50 people, there were only about 13 social scientists, five with Ph.D.s — many of the others came from a military background. Because of the AAA, "there are a lot of highly motivated, ethical, critical anthropologists who are being discouraged from helping the program." HTS project manager Fondacaro admits that finding recruits with regional expertise is "very rare," but he argues that HTS is creating a population of social scientists with firsthand experience in Iraq and Afghanistan where none existed before.

HTS is not the first instance of anthropologists' involvement with war efforts. Before the First World War, the field techniques of the discipline were used by the British to administer and subdue the different cultural groups at the edges of its empire. Later, in World War II, anthropologist Ruth Benedict played a key role in President Franklin Roosevelt's decision to allow the Japanese Emperor's reign to continue as part of Japan's surrender to the U.S. According to Price, who has written a book on the use of anthropology during World War II, the majority of American anthropologists were actively involved in the Allied war effort. One British anthropologist, Edmund Leach, even led a team of ruthless Kachin fighters — the indigenous group he was studying in Burma — against the nation's Japanese occupiers.

But the relationship between the military and anthropology soured during the 1960s and early '70s. In 1964 the U.S. Army recruited scholars for Project Camelot, a program whose goals included helping the U.S. Army "assist friendly governments in dealing with active insurgency problems," such as in Chile, the project's test case. The project never moved out of Chile, however; in 1965, once the public got wind of it, Project Camelot was canceled. Later, in 1970, documents stolen from a U.S. anthropologist's office implicated a number of social scientists in clandestine counterinsurgency efforts in Thailand. These two scandals created an uproar at the AAA, and many anthropologists grew wary of military-funded programs. Over the past 30 years, according to an article by Montgomery McFate, the senior social scientist at HTS and a trained anthropologist, "the discipline has become hermetically sealed within its ivory tower."

AAA policy is not against anthropologists helping the military — a few of the co-authors of the AAA report, in fact, work closely with the military. But McFate's larger point stands: for the past few decades, anthropologists have had little influence in military or foreign policy circles. As American troops adopt a counterinsurgency strategy, cultural knowledge has become a foremost Pentagon concern. They know historically the record for winning a short-term counterinsurgency is not good, so they've once again sought out cultural expertise. The discipline's checkered history, however, has made many anthropologists sensitive to the parallels between HTS and the colonial era. "Anthropology was used in much the same way to help colonial militaries and colonial occupation," says David Vine, an anthropology professor at American University.

Of course, this hasn't stopped the military from asking for their help. "What's been missing is the insight and the experiences that social scientists bring to these kinds of conflicts," Fondacaro says. The traditional Army, he says, is good at treating "the symptoms of insurgency" — fighting armed violent groups or reducing the number of IEDs, for instance — but "what HTS is focused on is the disease. There's a reason why the population tolerates and sometimes actively supports groups that advocate violence." That, says Fondacaro, is what HTS is trying to diagnose and ultimately cure.

When it comes down to it, the AAA has no sanctioning power, and the decision whether or not to join HTS comes down to the individual. For now, at least, the Pentagon wants to leverage the cultural insights of academics to succeed in Iraq and Afghanistan, but whether HTS has brought more top scholars into the military fold or only widened the schism between academe and the military remains unclear. James Der Derian, a professor of political science at Brown University who recently finished a documentary on HTS, and whose friend and colleague Michael Bhatia was killed in Afghanistan (one of three HTS social scientists to die on duty), says, "The emphasis in previous wars has been more about how you defeat the enemy by controlling territory" but that recently, "the center of gravity shifted to a psychological territory." HTS is a clear indication that the Pentagon has realized that in order to win the wars of the 21st century, cultural knowledge will need to be integrated into combat operations. And how do we do that exactly? Says Der Derian: "We're still trying to figure that out."
Posted by Mercury at 9:04 AM