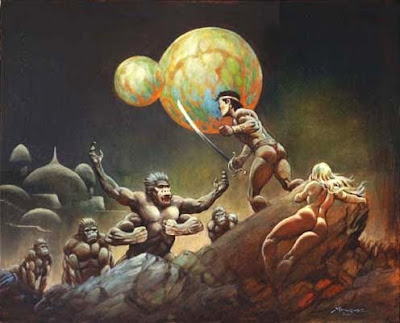 This whole idea is disgusting.

Mars Daily
The monkeys at this run-down research centre which was once the pride of Soviet science have seen it all -- a brutal civil war, freezing winters and starvation.

Now, if the scientists at the Institute of Experimental Pathology and Therapy have their way, one of these furry apes could someday be plucked from its cage and sent on a pioneering mission to Mars.

"We have plans to return to space," declared Zurab Mikvabia, the director of this institute nestled in a lush forest on a hill overlooking the Black Sea coast of Abkhazia, a breakaway region of ex-Soviet Georgia.

Residents of the Abkhaz capital Sukhumi call this place the "monkey nursery" and proudly recall how it produced groundbreaking medical research and raised two rhesus monkeys, Yerosha and Dryoma, sent into space in 1987.

But the institute fell on hard times after the collapse of the Soviet Union as Abkhazia fought a war to break free of Georgian control and fell into a long period of economic isolation.

Hundreds of apes died or disappeared during the 1992-93 war as Abkhaz separatists and Georgian troops fought over Sukhumi, an elegant seaside town famed as a resort in Soviet times.

"Many monkeys were shot. They were let out of their cages and just ran around the city," said Aldona, an institute employee who doubles as a tour guide for visitors.

Hunger and illness killed many more. There are now 350 apes, mostly baboons and macaques, confined in grim outdoor cages. The pre-war population was about 1,000 in Sukhumi plus thousands more at other branches of the institute.

At least a few dozen more monkeys are believed to be living in the wooded mountains of Abkhazia, descendants of a 1970s experiment where scientists released apes into the wild.

Testifying to the institute's glory days, a Soviet-era statue of a baboon stands in the central courtyard amid weeds and dry fountains.

In recent years, conditions for the apes have improved somewhat as Abkhazia enjoyed an investment boom, largely due to Russia, which recognised the region as an independent state in 2008 after a brief war with Georgia.

Only Nicaragua, Venezuela and the Pacific island nation of Nauru have joined Russia in recognising Abkhazia's independence, while the rest of the world considers it part of Georgia.

Mikvabia said the institute had improved the monkeys' diet and would soon start moving them from cages to large open-air enclosures where they would be able to run more freely.

"It's not normal to keep monkeys in small cages," said Mikvabia, a respected Abkhaz doctor who was appointed director of the institute in July.

As he smoked a pipe in his office, Mikvabia expressed his determination to bring serious science back to the institute after years when it essentially became a zoo for gawking tourists.

The institute is in preliminary talks with Russia's Cosmonautics Academy about preparing monkeys for a simulated Mars mission that could lay the groundwork for sending an ape to the Red Planet, Mikvabia said.

Such an initiative would build on Mars-500, a joint Russian-European project that saw six human volunteers confined in a capsule in Moscow for 120 days earlier this year to simulate a Mars mission.

"Earlier this programme was aimed at sending cosomonauts, people (to Mars)," Mikvabia said.

"But given the length of the flight to Mars, and given the cosmic rays for which we don't have adequate protection over such a long trip, discussions have focused recently on sending an ape instead of a person."

Estimates for the length of the journey to Mars vary depending on the type of mission envisioned, but the European Space Agency says its proposal for a round-trip mission would take 520 days, or about a year and a half.

If Russia pursues the idea of sending monkeys to Mars, Mikvabia's institute could become the site of an enclosed "biosphere" where apes would be kept for long periods to simulate spaceflights.

In a twist reminiscent of science fiction, the project would also include a robot designed to take care of the imprisoned ape.

"The robot will feed the monkey, will clean up after it. Our task will be to teach the monkey to cooperate with the robot," Mikvabia said.

History shows, however, that monkeys and technology can be a volatile combination.

Yerosha, perhaps the institute's best-known ape, freed a paw on his 13-day spaceflight in 1987 and started fiddling with buttons and tearing sensors off his body, much to the consternation of scientists on the ground.

Today's mission planners are determined to prevent such monkey business on the much longer and costlier trip to Mars.

"Technicians have told us that it's not difficult to build such a robot," Mikvabia said. "The hard part is teaching the monkey to live with the robot."
Posted by Mercury at 3:29 PM