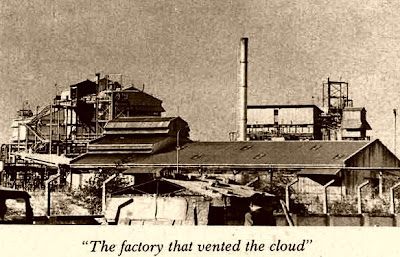 December 3rd, 1984 marked the day in Bhopal, India of mankind's worst industrial disaster and little has changed over the past 23 years except some perfunctory, minor monitoring and cleanup and a pittance [in some cases] of a $550 settlement. Union Carbide's quest for cheap labor and relaxed hazardous regulations yielded over 3,000 deaths and uncounted injured and an environment that reeks of dangerous products poisoning the land. Was the practice of social responsibility even considered from the beginning? Shame to an industry that profits from loss of life and environmental damage.

Hundreds of tons of waste still languish inside a tin-roofed warehouse in a corner of the old grounds of the Union Carbide pesticide factory here, nearly a quarter-century after a poison gas leak killed thousands and turned this ancient city into a notorious symbol of industrial disaster.

The toxic remains have yet to be carted away. No one has examined to what extent, over more than two decades, they have seeped into the soil and water, except in desultory checks by a state environmental agency, which turned up pesticide residues in the neighborhood wells far exceeding permissible levels.

Nor has anyone bothered to address the concerns of those who have drunk that water and tended kitchen gardens on this soil and who now present a wide range of ailments, including cleft palates and mental retardation, among their children as evidence of a second generation of Bhopal victims, though it is impossible to say with any certainty what is the source of the afflictions.

Why it has taken so long to deal with the disaster is an epic tale of the ineffectiveness and seeming apathy of India’s bureaucracy and of the government’s failure to make the factory owners do anything about the mess they left. But the question of who will pay for the cleanup of the 11-acre site has assumed new urgency in a country that today is increasingly keen to attract foreign investment.

It was here that on Dec. 3, 1984, a tank inside the factory released 40 tons of methyl isocyanate gas, killing those who inhaled it while they slept. At the time, it was called the world’s worst industrial accident. At least 3,000 people were killed immediately. Thousands more may have died later from the aftereffects, though the exact death toll remains unclear.

More than 500,000 people were declared to be affected by the gas and awarded compensation, an average of $550. Some victims say they have yet to receive any money. Efforts to extradite Warren M. Anderson, the chief executive of Union Carbide at the time, from the United States continue, though apparently with little energy behind them.

Advocates for those who live near the site continue to hound the company and their government. They chain themselves to the prime minister’s residence one day and dog shareholder meetings on another, refusing to let Bhopal become the tragedy that India forgot. They insist that Dow Chemical Company, which bought Union Carbide in 2001, also bought its liabilities and should pay for the cleanup.

"Had the toxic waste been cleaned up, the contaminated groundwater would not have happened," says Mira Shiva, a doctor who heads the Voluntary Health Association, one of many groups pressing for Dow to take responsibility for the cleanup. "Dow was the first crime. The second crime was government negligence."

Dow, based in Michigan, says it bears no responsibility to clean up a mess it did not make. "As there was never any ownership, there is no responsibility and no liability — for the Bhopal tragedy or its aftermath," Scot Wheeler, a company spokesman, said in an e-mail message.

Mr. Wheeler pointed out that the former factory property, along with the waste it contained, had been turned over to the Madhya Pradesh State government in June 1998, and that "for whatever reason most of us do not know or fully understand, the site remains unremediated."

He went on to say that Dow could not finance remediation efforts, even if it wanted to, because it could potentially open up the company to further liabilities.

In a letter to the Indian ambassador to the United States in 2006, the Dow chairman, Andrew N. Liveris, sought assurance from the government that it would not be held liable for the mess on the old factory site, "in your efforts to ensure that we have the appropriate investment climate."

The claims have divided the government itself. It is now in the throes of a debate over who will pay — a debate that might have taken place behind closed doors were it not for a series of public information requests by advocates for Bhopal residents that turned up revealing government correspondence.

It showed that one arm of the government, the Chemicals and Petrochemicals Ministry, entrusted with the cleanup of the site, has wanted Dow to put down a $25 million deposit toward the cost of remediation, while other senior officials warned that forcing Dow’s hand could endanger future investments in the country.

A senior government official, prohibited from speaking publicly on such a contentious issue, described the quandary. "Do you want $1 billion in investment, or do you want this sticky situation to continue?" the official said, calling it a stalemate.

The government is expected to make a final decision later this year.

Beyond who will pay for the cleanup here, the question is why 425 tons of hazardous waste — some local advocates allege there is a great deal more, buried in the factory grounds — remain here 24 years after the leak?

There are many answers. The company was allowed to dump the land on the government before it was cleaned up. Lawsuits by advocacy groups are still winding their way through the courts. And a network of often lethargic, seemingly apathetic government agencies do not always coordinate with one another.

The result is a wasteland in the city’s heart. The old factory grounds, frozen in time, are an overgrown 11-acre forest of corroded tanks and pipes buzzing with cicadas, where cattle graze and women forage for twigs to cook their evening meal.

Since the disaster, ill-considered decisions on the part of local residents have only compounded the problems and heightened their health risks. Just beyond the factory wall is a blue-black open pit. Once the repository of chemical sludge from the pesticide plant, it is now a pond where slum children and dogs dive on hot afternoons. Its banks are an open toilet. In the rainy season, it overflows through the slum's muddy alleys.

The slum rose up shortly after the gas leak. Poor people flocked here, seeking cheap land, and put up homes right up to the edge of the sludge pond. Once, the pond was sealed with concrete and plastic. But in the searing heat, the concrete cover eventually collapsed.

The first tests of groundwater began, inexplicably, 12 years after the gas leak. The state pollution control board turned up traces of pesticides, including endosulfan, lindane, trichlorobenzene and DDT. Soil sediments were not tested. The water was never compared with water in other city neighborhoods. The pollution board saw no cause for alarm.

Nevertheless, in 2004, complaints from residents led the Supreme Court to order the state to supply clean drinking water to the people living around the factory. By then, nearly 20 years had gone by.

"It is a scandal that the hazardous wastes left behind by Union Carbide unattended for 20 years have now migrated below ground and contaminated the groundwater below the factory and in its neighborhood," wrote Claude Alvares, a monitor for India's Supreme Court, who visited here in March 2005.

He tasted the water from one well. "I had to spit out everything," he wrote in his report. The water "had an appalling chemical taste." Neighborhood women brought out their utensils to show how the water had corroded them.

As his report went on to point out, the government was long ago made aware of the likelihood of contamination. A government research center warned more than 10 years ago that, if left untreated, the toxic residue on the factory grounds would seep into the soil and water.

Around the same time, under public pressure, state authorities finally scooped up the toxic waste that had lain in clumps around the factory grounds, and stored it inside the tin-roofed warehouse. The warehouse was padlocked only about four years ago.

The waste was supposed to be taken to an incinerator in neighboring Gujarat, but the government has yet to find a contractor willing to pack it into small, transportable parcels. There have been delays in acquiring transport permits, too, with citizens groups raising new questions about the hazards of transporting the waste.

Ajay Vishoni, the state gas and health minister, said he was confident that none of the waste was hazardous anymore, nor had anyone proved to his satisfaction that it had ever caused the contamination of the groundwater. "There is hype," he said.

In 2005, a state-financed study called for long-term epidemiological studies to determine the impact of contaminated drinking water, concluding that while the levels of toxic contaminants were not very high, water and soil contamination had caused an increase in respiratory and gastrointestinal ailments.

In the Shiv Nagar slum about half a mile from the factory, there is a boy, Akash, who was born with an empty socket for a left eye. Now 6, he cannot see properly or speak. He is a cheerful child who plays in the lanes near his house.

His father, Shobha Ram, a maker of sweets who bought land here many years after the gas leak and built himself a two-room house, said the boy’s afflictions were caused by the hand-pumped well from where his family drew water on the edge of the sludge pond for years. He said it had not occurred to him that the water could be laced with pesticides.

"We knew the gas incident took place," he said. "We never thought the contaminated water would come all the way to our house."

The stories repeat themselves in the nearby slums. In Blue Moon, Muskan, a 2-year-old girl, cannot walk, speak or understand what is happening around her. Her father, Anwar, blames the water.

In Arif Nagar, Nawab and Hassan Mian, brothers who are 8 and 12, move through their house like newly hatched birds, barely able to stand. They have no control over their muscles. Their mother, Fareeda Bi, is unsure of exactly what caused their ailment, but she, too, blames the water.

"There are more children like this in the neighborhood," she said, "who cannot walk, who cannot see."

To compound the tragedy, there is no way to know to what extent the water is to blame. The government suspended long-term public health studies many years ago.
Posted by Mercury at 11:47 AM