And the winner is...Ms Kathryn Tabb 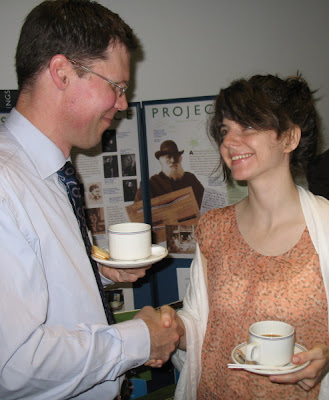 The Darwin Correspondence Project is delighted to announce that the winner of its first Templeton essay prize in Darwin and religion is Kathryn Tabb, for her essay Darwin on Orchis Bank. Ms Tabb is a graduate of the University of Chicago, and is enrolled in a PhD programme at the University of Pittsburg, where she will begin studies in the history and philosophy of biology this autumn. She has just completed an MPhil at the University of Cambridge.

Entries for the prize were received from six different countries, from high school, undergraduate and graduate students in a wide range of disciplines. The Project wishes to thank the John Templeton Foundation for funding the essay prize, and all the entrants for their submissions. Another round of prizes will be awarded in 2009, the details of which will be announced in September 2008.

The essay will be published here when available.

University of Cambridge
An MPhil student at Cambridge University's Department of the History and Philosophy of Science has won a £1000 prize in an essay competition connecting Darwin’s work with debates on science and religion.

Kathryn Tabb, a graduate of the University of Chicago who came over to Cambridge as a Gates Scholar, picked up the prize for an essay examining the implications of Darwin's work on orchids.

"Darwin at Orchis Bank" saw off competition from entrants in six different countries working in fields as diverse as theology, creative writing and biology.

The essay considered his work on orchid morphology and pollination and its implications for the question of design in nature, drawing parallels and contrasts with contemporary ideas of 'intelligent design'. Darwin's research was discussed at length in correspondence with noted Harvard botanist Asa Gray, an ardent Presbyterian.

Dr Paul White, who organised the competition, said: "It is very gratifying for us on the Darwin Correspondence Project to see a student engaging with these historical materials with such thoughtfulness and enthusiasm, and exploring its modern relevance."

Competition entrants were encouraged to study Darwin's letters closely and to explore their relevance to contemporary discussions, as well of those with the 19th century.

The competition, which was open to students from all disciplines and stages of education, forms part of an initiative on Darwin and religion started by the Correspondence Project in 2007.

Its long term goal is to create a web resource to bring together material from Darwin's correspondence relevant to questions on science and religion with modern commentaries by leading authorities on the various areas of the debate. Kathryn's essay will be published on the Project's website as part of this effort.

Funding for the award was provided by the John Templeton Foundation, established in 1987 by philanthropist Sir John Templeton to fund work in the natural sciences, philosophy and theology, solutions to poverty and education.

The Darwin Correspondence Project, which is based at the University Library, is dedicated to locating and publishing Darwin's letters. To date, it has located around 14,500 letters exchanged by Darwin and more than 2000 correspondents, and has made the complete texts of nearly 6000 of these available in print or online.

The Gates Scholarships were established in October 2000, through a $210 million gift to the University of Cambridge from the Bill & Melinda Gates Foundation. The benefaction creates in perpetuity an international scholarship programme for foreign students to study at Cambridge.

My name is Kathryn Tabb; I was born in New York City and attended St. Ann's School in Brooklyn. In 2006 I graduated from the University of Chicago with a concentration in History, Philosophy, and Social Studies of Science (HPS), an interdisciplinary program that allowed variegated studies across the spectrum of my interests. While at Chicago, inspired by a visit to Mexico with a service committee in 2002, I began teaching at an adult education program for recent immigrants. I was hired as Assistant Director in the summer of 2004. My academic work culminated in a prize-winning philosophical and historiographical investigation of the teleology at work in evolutionary theory, and I am currently applying what I learned through this project to a radical and fascinating branch of my discipline - the philosophy of psychiatry and clinical psychology. In so doing my intention is to re-conceptualize contemporary treatment and diagnostic practices in these fields. The outstanding engagement of the Cambridge HPS faculty with both the philosophy of biology and the human sciences makes it the perfect place to bridge my two interests. In pursuing a Ph.D. I aim to obtain a professorship in the philosophy of biology, psychology, or an allied field.

University of Chicago Chronicle
After being named a 2007 Gates-Cambridge scholar, 2006 College alumna Kathryn Tabb will be studying next fall at Cambridge University—exactly where she wants to be.

"It is one of the best programs in the world for my field of study," Tabb said of the graduate program in History and Philosophy of Science. "It's such a specific interest that there are few departments specifically dedicated to it. I’m excited to be in a community of people who share my interests within history and philosophy."

While enrolled at Chicago, Tabb found additional career inspiration while on a social service trip to Mexico in 2002, after which she began teaching at an adult education program for recent immigrants in Chicago.

Tabb is currently focusing on what she called a "radical and fascinating branch of my discipline—the philosophy of psychiatry and clinical psychology."

She said, "In so doing, my intention is to re-conceptualize contemporary treatment and diagnostic practices in these fields."

Tabb received an A.B. in History, Philosophy and Social Studies of Science and Medicine from Chicago. She said she is looking forward to taking the knowledge she gained during her undergraduate career into her graduate career. "Like Chicago, Cambridge is a vibrant educational community, and I can’t wait to be there," she said. Tabb is one of three 2006 Chicago graduates to receive the Gates Cambridge scholarship from the Bill and Melinda Gates Foundation. Alumni Anyu Fang and Karen McClendon, also won the scholarships.