Scan those "cubetainers" for radioactivity. 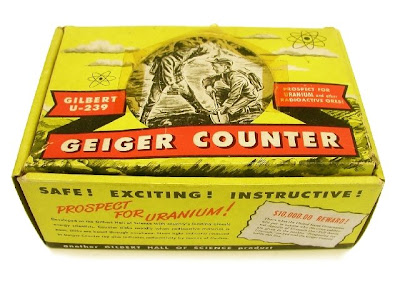 Detecting gamma-ray bursts from space is really no different than finding and intercepting nuclear material illegally stowed inside shipping containers or even trains — at least that’s the view of the Principal Investigator who created the Burst Alert Telescope (BAT) that has detected hundreds of gamma-ray bursts from all directions in the sky.

To prove his point, Principal Investigator Scott Barthelmy of NASA's Goddard Space Flight Center in Greenbelt, Md., received Department of Energy funding to cobble together a prototype system using leftover components from the BAT-development effort. Although his prototype would have to be smaller and more mobile to operate as a counter-terrorism tool, the same principles are at play, he said. He hopes to make the case and win Department of Homeland Security (DHS) funding to build a second-generation detection system equipped with even more capable detectors now being developed under Goddard’s Internal Research and Development (IRAD) program.

The instrument that inspired the potential spin-off application is now flying aboard NASA’s Swift mission, which as its name implies, swiftly detects gamma-ray bursts and then targets itself toward the event in about one minute to make detailed observations. Gamma-ray bursts are the most powerful explosions in the universe — second only to the Big Bang in terms of total energy output. They occur randomly about once per day, lasting only a few milliseconds to tens of milliseconds in duration.

BAT is the instrument that detects and locates the burst. Developed with Goddard R&D funding several years ago, BAT carries out its job using a technique called a "coded aperture mask" that creates a gamma-ray shadow on its 32,768-pixel, cadmium-zinc-telluride (CZT) detector plane. The mask itself contains 52,000 randomly placed lead tiles that block some gamma rays from reaching the detectors. With each burst, some of the CZT detectors light up while others remain dark, shaded by the lead tiles. The angle of the shadow points to the direction of the gamma-ray burst.

The same instrument concept is ideal for homeland security, Barthelmy said. "We’ve already produced an instrument that has a 100-degree field of view and can pinpoint the location of a gamma-ray source," Barthelmy said. "It's what you would need to find and intercept nuclear material stowed inside shipping containers and trains."

A new generation of CZT detectors and electronics, which Barthelmy is developing under current IRAD funding for possible use on NASA's proposed Energetic X-ray Imaging Survey Telescope (EXIST), would further improve the prototype. "They really need the ability to distinguish legitimate sources," he said. The new CZT technology would do just that. It could distinguish isotopes and determine whether the detected nuclear material was medical in nature or posed a national security threat, he said.

The next step, he said, is winning DHS funding and developing a second-generation prototype using the EXIST detectors. "We really want to move into the second stage."
Posted by Mercury at 11:17 AM