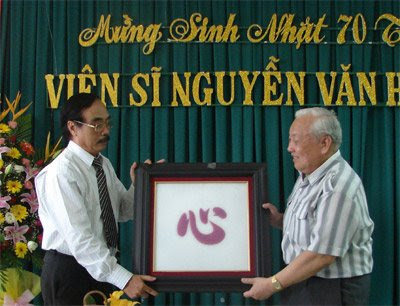 VietNamNet Bridge
Around 100 scientists participated in a ceremony held on July 24 in HCM City to celebrate the 70th birthday of professor, academician Nguyen Van Hieu.

The ceremony was held by the Institute for Application Material Sciences in cooperation with some agencies under the Vietnam Science and Technology Institute.

Nguyen Van Hieu, born in 1938, is the eldest son of a family with ten children. In 1956, he graduated from Hanoi Teachers’ Training University and began teaching physics at Hanoi University.

In early 1958, in the university auditorium, he attended Professor Ta Quang Buu's talk on two Chinese-American scientists' discovery of "non-conservation of evenness-oddity in deficient interactions." He was captivated by their lectures, which opened his mind to the new horizon of studying the mysteries of matter. He went straight to the books. Fortunately, the university had at its command a large library brought all the way from a university campus in China. And new books on science-technology from the Soviet Union were also available at the foreign language bookshop on Trang Tien Street.

Some time later, he was sent to the Joint Institute for Nuclear Research, Dubna, in the former Soviet Union for research on theoretical physics. Just one year later, he published an article. Academician Bogolubov, the Dubna Institute director, at once set his eyes on the young Vietnamese scientist along with his theory and foresaw he would have a bright future in science.

After four years of hard work at Dubna, Hieu successfully defended his doctoral thesis on Neutrino Physics and his PhD thesis 'Asymptotic relations of scattering amplitudes in relativistic local quantum field theory.' The Soviet scientists rated him as a scientist of high calibre and his theses excellent. After the successful defence of his PhD thesis, he started studying with great intensity "a theory of symmetries of elementary particles".

In 1967 alone he accomplished 20 studies that were later included in the book entitled 'Lectures on the Theory of Unitary Symmetry of Elementary Particles'.

In the same year, he started working with the Soviet scientist Academician Anatoly Logunov, director of physics at the Institute for High Energies in Serpukhov, on a project to study the multi-production process in high energies-inclusive processes. It took 15 years and on December 21, 1989, the Soviet Union State Commission for Inventions conferred upon him Diploma No 228, certifying that, in co-operation with several Soviet scientists, headed by Mr Logunov, he discovered a new law of nuclear physics at high energy: scale invariance of multi-production cross sections.

The theory of Nguyen Van Hieu and his associates was checked and verified by tests and experiments by prestigious scientists and well-known laboratories in the world. The law helps us understand better the micro-worlds with mechanisms for interaction in the creation of material particles, and it greatly helps to boost the development of nuclear physics at high energy, both theoretically and experimentally.

In 1982, Nguyen Van Hieu was elected academician of the Soviet Academy of Sciences and in 1986 he was awarded the Lenin Prize, the highest distinction of the Soviet State.

Recalling those years, he told me: "It was the golden time of my life. It was thanks to the excellent professors and the good conditions for study that I could make some contributions to science. All this was responsible for what I have achieved."

Professor Nguyen Van Hieu is the author of hundreds of scientific works in two domains: theory of quantum field and theory of solids. In addition, he made great contributions to the formation of the National Institute of Physics and the National Institute of Sciences of Vietnam, which were built from scratch on plots of land in the outskirts of the city, with buildings equipped for scientific research and co-operation with foreign scientists.

Besides engaging himself with great passion in scientific research, he shows no less concern over the training of scientists.

From the early days of the establishment of the Institute, he gave lectures to the young scientists conducting research on the theory of physics, helping them study the application of approaches of theory of quantum field in their research of up-to-date theory of solids.

He has also expanded co-operation with foreign countries, joining in scientific research with them; he has sent young researchers to work in laboratories overseas under the guidance of great scientists, in the direction of the development of the Institute.

For some time, he has been involved in the Party Central Committee as a minister and participated in a number of decisive resolutions of the state. However, what he likes best is conducting scientific research and giving lectures to students. After giving up managerial posts, he has made great efforts to prepare for the training of students, first of all with a complete set of manuals in the spirit of Nguyen Van Hieu. As he sees it, the manuals should embrace the most up-to-date, concise and essential instruction.

In 1996, the state of Vietnam conferred the Ho Chi Minh Prize upon him – the highest award for those who have made excellent contributions to science and culture.

If you care to read some of his papers visit arXiv.


Nguyen Van Hieu
Posted by Mercury at 6:25 AM