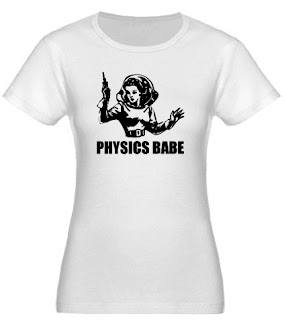 Symmetry
The eyes may be the windows to the soul, but it helps to have other reference points. Celtic dragon knots, Che Guevara headshots, Dilbert cartoons and Shrödinger’s equation all fit the bill in the realm of expressive T-shirts.

If you're one of those people who can never have enough physics in your life, you may enjoy digging around the physics-related shirts, mugs, clocks, and other merchandise available on the Internet.

In the online age, where everybody can participate, ventures like cafepress.com allow users to design their own products and have them made on demand, either for themselves or to sell in their own stores. At the site, a simple search for "physics" returns more than 7000 matches, and even though many of the items available are not really physics-fan desirables, there is a wealth of paraphernalia to explore.

A few ideas turn up often enough to vouch for their secure place in popular consciousness: references to Schrödinger's cat, quotes by Einstein, and quantum mechanics' allotment of a general sort of freakiness.

Other items offer assurances that science is hip: "PHYSICS BABE" shows a slinky cartoon woman in a space suit wielding a ray gun, while another shirt proclaims "Science makes me cool." There are cheat-sheet designs that all but replicate a student's notes onto a shirt; there is self-deprecating humor. "Research…screwing up for fun and profit," one T-shirt cracks. Or maybe it really is the case that "78% of all statistics are made up on the spot" and "Progress is directly proportional to equipment ruined."

Many of these designs are in-jokes, intelligible and interesting primarily to those already in the know. Anyone want a Maxwell’s equations wall clock? How about this message: "Let's put the fun back in wavefunction!"

I prefer designs that communicate through graphics: pictures of archaic physics equipment, the iconic head of Nikolai Tesla with his name all in caps, or "Chillin' with my [ohm]ies." A simple image of a lab-coated man pouring liquid into a vial, labeled "SCIENCE!", appeals to me more than the slogan, "Quantum physics says you'll never find me if I stand still."

One particularly obscure shirt features a kinematic equation purporting to show "the airspeed velocity of an unladen swallow." I didn't get it, but my fellow intern Calla Cofield chuckled, explaining that it was a reference to Monty Python. "Yeah," she said, "you have to be a double nerd to get that." 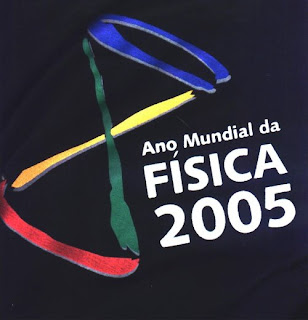