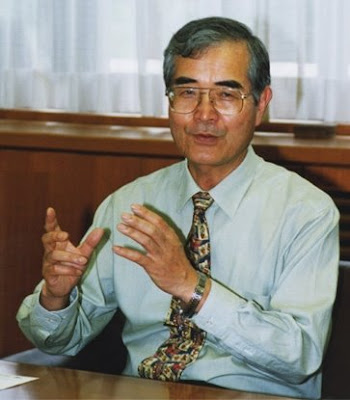 physicsworld.com
Yoji Totsuka, former director general of the KEK particle-physics lab in Japan, died yesterday at the age of 66. Totsuka, whose research interests were in the field of neutrino physics, served as KEK boss for three years from April 2003 After retiring in 2006, Totsuka became a professor emeritus at KEK and the University of Tokyo.

As KEK boss, Totsuka oversaw the Belle B-factory, in which collisions between electrons and positrons generate copious quantities of B-mesons, which are used to probe the differences between matter and antimatter. He was also in charge of the K2K neutrino-oscillation experiment, in which a beam of neutrinos is sent 250km to the vast underground SuperKamiokande detector at the Kamioka Observatory.

Before moving to KEK in October 2002, Totsuka was head of the SuperKamiokande experiment. Under Totsuka’s leadership, the experiment recorded the first ever evidence for neutrinos changing, or "oscillating", from one type to another, which indicated that these particles had mass. Until then, neutrinos were believed to be massless. Totsuka also oversaw the rebuilding of SuperKamiokande after most of its 11,000 photomultiplier tubes blew up in November 2001.

Born on 6 March 1942, Totsuka received his doctorate in 1972 from the University of Tokyo for research into cosmic-ray muons and then studied electron-positron collisions at the DESY lab in Hamburg, Germany. He joined the Kamiokande experiment — the forerunner of Superkamiokande — in 1981 and eventually became director of the Institute for Cosmic Ray Research at the University of Tokyo. The institute runs a range of astrophysics experiments, including the neutrino detectors at Kamioka.

During his lifetime, Totsuka received numerous awards including the Order of Culture of Japan and the Bruno Pontecorvo Prize in 2004. Current KEK boss Atsuto Suzuki paid tribute to Totsuka, calling him an "outstanding physicist" and "a prominent leader both in non-accelerator and accelerator neutrino experiments". Although Suzuki admitted that the pair had had "many discussions and sometimes quarrels", he praised Totsuka for being "very proactive in pushing foward international cooperation as members of many large particle laboratories".