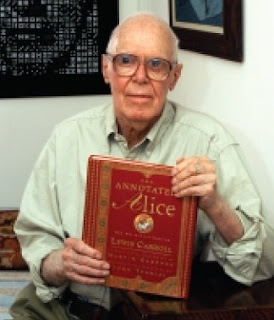 Martin Gardner
October 21st, 1914
The following is a fine tribute to Martin Gardner best know for his "Mathematical Games" section in Scientific American from 1956 to 1981.

"A gathering for Gardner"

How does Martin Gardner inspire so many different kinds of people? Robert P Crease explores the recreational mathematician’s appeal.

[Chairman of the Department of Philosophy, Stony Brook University and historian at the Brookhaven National Laboratory]

physicsworld.com
Martin Gardner, who turns 94 this autumn, seems to have pulled off an astounding trick. Every other year hundreds of people gather to honour Gardner, who is the author of over 70 books and wrote the popular "Mathematical Games" column that appeared in Scientific American for a quarter of a century from 1956. What is astonishing is that the people come from a bewildering variety of professions and include jugglers, magicians, artists, puzzle-makers, logicians, computer scientists, pseudoscience debunkers and mathematicians.

One long-standing fan of Gardner is the Atlanta businessman and puzzle collector Tom Rodgers. After Gardner stopped writing his column, Rodgers began trying to convince the famously humble author to attend an event in his honour. When Gardner finally relented, Rodgers used Gardner's extensive correspondence files to compile a list of invitees. The first "Gathering for Gardner", which Rodgers organized in 1993, was so successful that a second was held in 1996. Since then, it has been held biannually in an Atlanta hotel. Each event is called "G4Gn", with the n denoting the number in the series. The most recent gathering, which took place over four days last March, was G4G8.

Gardner, who now resides in an “"ssisted-living" facility in Oklahoma, sadly no longer travels. But his presence was everywhere at G4G8. Talks ranged over his favourite topics — including mathematics, logic, games, puzzles, sculptures, mosaics and knots — and were all delivered and often staged wittily, with infectious enthusiasm and commitment. One mathematician ran the Atlanta marathon in the morning, then turned up to co-present his talk still wearing running shorts and his marathon number, in a kind of run-and-prove biathlon.

Raymond Smullyan, an 89-year-old magician and logician with white, shoulder-length hair and long, crooked fingers, gave a talk that consisted entirely of reciting a string of puzzles, paradoxes and one-liner-like, selfrefuting sentences. It began when he strode to the podium and said "Before I begin speaking, let me say something", and ended with paradoxes associated with the remark "Only an idiot would believe this sentence".

Gardner is renowned for debunking pseudoscience — he is a founding member of the Committee for the Scientific Investigation of Claims of the Paranormal — and several talks were in that vein. One debunked the "Indian rope trick", which supposedly involves a climbable, vertically rising rope but is evidently a hoax that can be traced back to an 1890 article in the Chicago Daily Tribune.

Gardner is also famous for his creation of "Dr Matrix", a fictitious scholar whom Gardner used to mock numerology — the belief that all numbers are intrinsically linked to real objects and living things. In homage, a G4Gn tradition is for one Dr Matrix impersonator to promote n, followed by another who attacks n. At this year's meeting, we heard tongue-in-cheek conspiracy theories; for instance, about why the maximum term of a US president is eight years, this summer's Olympics start on 8.8.08, Santa has eight reindeer, a piano has 88 keys, there are now eight planets in the solar system, and so forth. When one speaker asked "What’s 987,654,321 divided by 123,456,789?", my 13-year-old son Alex grabbed his calculator, already suspecting the answer.

Kenneth Brecher, a physicist and astronomer from Boston University, peppered his talk, "A torque about tops", with phrases like "I simply love tops!" and "I’m a top-a-holic!" and made it clear why their delightful properties attracted the affection of great physicists. James Clerk Maxwell created "the fanciest top ever made", Einstein worked on the subject, and Felix Klein and Arnold Sommerfeld spent 13 years writing a four-volume, 966-page text on rotating bodies.

After discussing the chirality of the peculiar spinning objects known as celts, Brecher mentioned scarab beetles, whose carapaces are the only known natural objects that circularly polarize light, and wondered about the evolutionary mechanism, if any, behind it. Brecher’s enthusiasm was so infectious that when he displayed a picture of Wolfgang Pauli and Niels Bohr intently playing with a top, the first thought that sprang to mind was not "Why did such great minds stoop to such a frivolous activity?", but rather "Of course!".

Between sessions, people juggled, danced, played the piano, built group sculptures, taught card tricks and how to fold intricate origami objects, and argued about difficult mathematical sequences. An exhibition area displayed puzzles, toys and art. Everyone had an interesting story. Colin Wright (who has a PhD in mathematics from Cambridge University in the UK) used a notation system to discover novel juggling tricks and was demonstrating them to anyone with an interest. Alex Stone, a graduate physics student from Columbia University, was researching a book on physics and magic. Louis Brown, an 11-year-old from New Jersey, had written a fan letter to Smullyan a week before G4G8 and Smullyan invited him to come along.

Though Gardner did not attend, nothing is said to delight him more than the collaborations fostered by the gatherings. At its conclusion, several participants flew to Oklahoma to bring him news and gifts.

The key to Gardner's trick — of assembling such a diverse array of people — is that creating and solving puzzles is an integral part of many fields. Mathematicians and scientists study puzzles posed by nature that perhaps only they can solve. Puzzle-makers design puzzles that they hope others can solve with difficulty, while magicians create perceptual puzzles to foist on audiences. Taking unashamed delight in the play of puzzle-solving, and witnessing others do it, is essential to being able to do it well. The G4Gs reveal that Martin Gardner does not force people to cross disciplinary boundaries — rather, he reminds us that these boundaries are artificial to begin with.