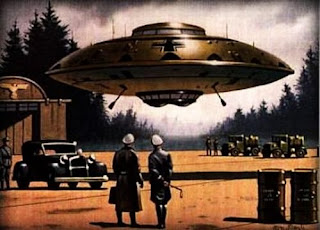 Now would this be some sort of subterfuge to perpetuate the study of the potential for UFOs in the sense of alien visitation?

The New York Times
ON the afternoon of Nov. 7, 2006, pilots and airport employees at O'Hare International Airport in Chicago saw a disc-like object hovering over the tarmac for several minutes. Because nothing was tracked on radar, the Federal Aviation Administration did not investigate. Yet radar is not a reliable detector of all aircraft. Stealth planes are designed to be invisible to radar, and many radar systems filter out signals not matching the normal characteristics of aircraft. Did it really make sense to entirely ignore the observations of several witnesses?

A healthy skepticism about extraterrestrial space travelers leads people to disregard U.F.O. sightings without a moment’s thought. But in the United States, this translates into overdependence on radar data and indifference to all kinds of unidentified aircraft — a weakness that could be exploited by terrorists or anyone seeking to engage in espionage against the United States.

The American government has not investigated U.F.O. sightings since 1969, when the Air Force ended Project Blue Book, an effort to scientifically analyze all sightings to see if any posed a threat to national security. Britain and France, in contrast, continue to investigate U.F.O. sightings, because of concerns that some sightings might be attributable to foreign military aircraft breaching their airspace, or to foreign space-based systems of interest to the intelligence community.

Most of the incidents investigated in Britain have been easily explained as misidentifications of stars and planets, aircraft lights, satellites and meteors, but some cases have raised national security or air safety issues.

On Dec. 26, 1980, for instance, several witnesses at two American Air Force bases in England reported seeing a U.F.O. land. An examination of the site turned up indentations in the ground and a level of radiation in the area that was significantly higher than ordinary. More witnesses at the same base reported the U.F.O. again on subsequent nights. The deputy base commander reported that the aircraft aimed light beams into the most highly sensitive area of the base — a clear security breach.

On March 30 and 31, 1993, there was a wave of U.F.O. sightings over Britain. One witness described a triangular-shaped craft that flew slowly over an air force base before accelerating away to the horizon in an instant, many times faster than a jet. The British military reported, "There would seem to be some evidence on this occasion that an unidentified object (or objects) of unknown origin was operating over the U.K."

On April 23, 2007, a commercial airline pilot and some of his passengers reported a huge cigar-shaped U.F.O. — the pilot estimated it to be a mile wide — near the Channel Islands. At the time, air traffic controllers reported to the pilot that radar picked up something, but that it was "unknown traffic."

In addition, there have been several incidents of near misses between U.F.O.s and known aircraft — enough to prompt the Ministry of Defense and the British Civil Aviation Authority to advise pilots, if they encounter anything, "not to maneuver, other than to place the object astern, if possible."

The United States is no less vulnerable than Britain and France to threats to security and air safety. The United States Air Force or the National Aeronautics and Space Administration should reopen investigations of U.F.O. phenomena. It would not imply that the country has suddenly started believing in little green men. It would simply recognize the possibility that radar alone cannot always tell us what’s out there.

Nick Pope, the author of "Open Skies, Closed Minds," was in charge of U.F.O. investigations for the British Ministry of Defense from 1991 to 1994.

Birth of a very popular mythology

SETI--ultimate loneliness?
Posted by Mercury at 11:55 AM