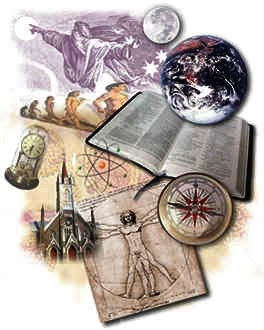 For some time there has been an annual monetary award given to one outstanding individual that attempts to bridge the gap between religion and science--the Templeton Prize. Is this attempt in vain or a realistic endeavor? Frankly, I think it is a good idea for there is so much disparity and individual/group animosity between science and religion stimulating politics, multilevel government legislation, and downright hatred. I cannot help but to think, that a potential outcome of this endeavor, uniting science and religion, could lead to a moderation and unification of religion itself. To develop the notion that "religion" is a subset of personal spirituality is a positive thing I feel. Perhaps this could be a result. We can surely all recognize an urgent need for intra-religious tolerance and understanding. If it blends with Christianity it must blend with all other religions as well and as comfortably. There is just too much history of man entertaining a "variety of religions" based on many tenants of philosophy. economics, and sociology. Just look at the number of disciplines of "Christianity" [Baptists, Methodists, Christian Scientists, Catholics, Mormons, Shakers, etc.] or sects of the Muslim faith or of Judaism. Each have a different agenda and interpretations of their sacred texts. It would be a keen idea if the multiplicity of theologies were more categorical [where concepts were more universal and mutually agreed upon] and religion would loosen the reigns of sacraments and institutional doctrine. Maybe this chaos of religious diversity will only be changed via the introduction of something other than the intrusion and challenge of the objectivity of science--say, a global and immediate catastrophe that challenges mankind's existence: Something that would be far more serious than global warming, insidious bacterial/viral infections, or nuclear annihilation--like, external Earth threats. Nevertheless, the quest for religions to embrace science is still not a bad idea and maybe its time for religions to move towards a different perspective and release the chains of ignorance but yet maintain a certain quantity of universal mystery.

This is a curious situation for if you stand back and take in the whole view of what is transpiring, one wonders if the function of the Templeton Prize concept is a "carrot and stick" approach [offering stimulus via cash prizes and recognition] or an organization rewarding individuals who are simply involved in the natural unfolding of a silent and diligent effort to bridge the gaps between religion and science. I suppose time will reveal the answer. I don't believe this effort to merge [whatever the quantitative input would be] science and religion is fortuitous or without merit. Mankind's history is littered with examples of religious modifications by science. It is a maturation story of complexity and fine tuning. Look at the history of the changing of religion by the introduction of a new universe view in Galileo's era. Big names and events were clashing: Galileo, Copernicus, Ptolemy, Catholicism, and the Reformation movement. We are now in the deep waters formulating the definition of life with passionate perspectives. I have indicated elsewhere that it is the institutionalized religion that appears to be more threatened than the realm of science. I probably won't even be a memory when all of this is resolved...and it may never be resolved.

Not all like the Templeton Prize. Mark Friesel wrote in physicstoday.org:

February 2001
The Templeton Prize for Progress in Religion may have an undesirable consequence for science. The prize (with exceptions) goes to those who try to create commonality between religion and science, but it may also lead some scientists to compromise their integrity.

When scientists who never wrote a word about religion are suddenly writing books about "god particles" and the like, it indicates to me that the authors consider integrity to be a convenience, truth to be malleable, and both to be subservient to money. Why, then, should anyone trust their research?

The subjects of rigorous intellectual pursuit can be divided into three major categories: science, philosophy, and religion. Religion is based on belief in certain tenets: a god or gods with certain attributes, a priest or seer who can dictate the will of the deity, and perhaps a book of divine laws. Such beliefs do not preclude the use of logic by believers, and a rational investigation of the observable universe can be made based on these beliefs, as can attempts to address philosophical questions. However, if a conflict arises between religious beliefs and the rational implications of those beliefs, or between belief and observation, it is logic or observation that must be perceived as wrong. As an example, given what we know of human physiology, we understand that there is no virgin birth in humans because conception requires the joining of sperm and egg. Yet Christians believe in virgin birth and therefore, to the believer such an occurrence must be possible, scientific considerations notwithstanding. Questioning the belief is not permitted. In brief, a defining principle of religion is that its fundamental tenets are accepted by its followers to be true beyond question.

In philosophy, axioms and rules of logic are fundamental. These may vary depending on the specific topic being addressed and may be investigated using yet other rules and axioms. The subject of an investigation may be religion and the observable universe, but if a conflict occurs then all elements--the beliefs, the rules of logic, and the axioms--may be questioned, because only the use of a logical system is fundamental to philosophy.

I do not mean to propose that we have evolved religion, science, and philosophy in quarantine from each other or from other intellectual activity--art, for example. Yet it appears that science cannot and does not address religious questions at all. The truth of religious belief, by definition lacking any fundamental connection with observation, cannot be meaningfully evaluated by scientific methods. Nor can the truth or reality of scientific principles be meaningfully evaluated by applying the tenets of a religion, based as the latter is on belief.

Within each category, questions may arise that cannot be adequately answered by referral to the category's basic tenets. An individual may perhaps resolve such questions to his own satisfaction by taking refuge in other tenets. However, if a scientist chooses to accept as a matter of faith that Planck's constant is a fundamental quantity, this does not make science a religion, nor imply that religion and science share some fundamental commonality. A religious believer may similarly accept observations as true, but this does not make his religion a science.

Particularly in the context of ongoing attempts by American religious conservatives to infuse public education with their religion, it seems to me that the Templeton Prize is little more than an incentive for them to continue such an effort. It also is a bribe--one that has successfully lured more than one well-known scientist into becoming a spokesman for the right-wing religious cause.


Templeton platform
Posted by Mercury at 6:02 AM