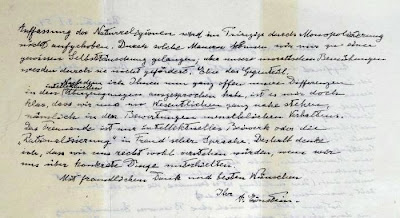 A letter in which Albert Einstein dismissed the idea of God as the product of human weakness and the Bible as "pretty childish" has sold at auction for more than US$400,000.

Bloomsbury Auctions said Friday that the handwritten letter sold to an overseas collector after frenetic bidding late Thursday in London. The sale price of US$404,000 — including the buyer's premium — was more than 25 times the pre-sale estimate.

Bloomsbury did not identify the buyer, but managing director Rupert Powell said it was someone with "a passion for theoretical physics and all that that entails."

"This extraordinary letter seemed to strike a chord, and it gave a deep personal insight one of the greatest minds of the 20th century," Powell said.

The letter was written to philosopher Eric Gutkind in January 1954, a year before Einstein's death. In it, the Einstein said that "the word God is for me nothing more than the expression and product of human weaknesses, the Bible a collection of honorable but still primitive legends which are nevertheless pretty childish."

physicsworld.com
A letter written by Albert Einstein the year before his death was sold for the staggering amount of £170,000 at an auction in London yesterday. The previously unrecorded letter, which has spent the past 50 years in a private collection, contains a discussion of Einstein’s views on religion, bringing new material to the debate about whether or not he believed in God. It was expected to fetch between £6000–8000.

The little-known letter, which is handwritten in German, was penned by the eminent physicist in 1954, at the age of 74, while he was living in Princeton in the US. It is addressed to his Jewish philosopher friend Eric Gutkind, in response to Einstein reading Gutkind’s newly published book Choose Life: The Biblical Call to Revolt.

As such, it reveals some of his thinking on religion. He states in the letter, for example, "The word god is for me nothing more than the expression and product of human weaknesses, the Bible a collection of honourable, but still primitive legends which are nevertheless pretty childish." And, although from a Jewish background, he writes, "For me the Jewish religion like all others is an incarnation of the most childish superstitions. And the Jewish people to whom I gladly belong and with whose mentality I have a deep affinity have no different quality for me than all other people."

Einstein’s other references to religion, such as the famous, "Science without religion is lame, and religion without science is blind," and his assertion that God does not play dice with the universe, collectively paint a confusing and ambiguous picture of his beliefs, and this letter, which is not listed in the source material of Max Jammer's Einstein and Religion, the most authoritative text on the subject, will provide new fuel for the long-running debate about whether or not Einstein was an atheist.

According to Richard Caton at Bloomsbury Auctions the winning bidder is, "a private buyer with a passion for theoretical physics and all that that entails." In this case it clearly entails parting with a lot of cash, as once the auction fees are added on, the buyer will actually be paying £207,600. This smashes the previous record of around £30,000 for the price of a letter by a physicist.

Einstein: Spiritual and the scientific
Posted by Mercury at 9:13 AM