New book--"Einstein's Mistakes: The Human Failings of a Genius" 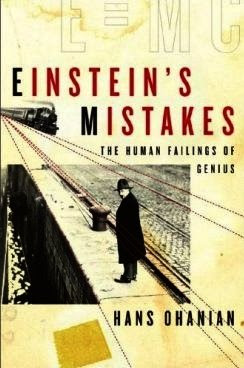 A new book, Einstein's Mistakes: The Human Failings of a Genius by Hans C Ohanian, will premire in September 2008 discussing the mistakes of the famous equation.

"Many of [Einstein's] ground-breaking discoveries were blighted by mistakes, ranging from serious misconceptions in physics to blatant errors in mathematics".
Ohanian has provided an eight-page taster of his work...in which he presents a "critical examination" of how Einstein went about proving his most famous equation E = MC2. All of these proofs, claims Ohanian, "suffer from mistakes". This is not the first time that Einstein's proofs have come under scrutiny, with various detractors and supporters arguing since at least 1908 — three years after the equation was first derived.

Why did Einstein's name become so closely linked with E = mc2? To a large extent this can be attributed to the influence he exerted by his repeated attempts to find a proof. These attempts, though defective, served to promote this equation and instigated other physicists to search for better proofs. However, as Mehra remarked in a letter to Wigner in a different context, to some extent it must be attributed to "the sociology of science, the question of the cat and the cream. Einstein was the big cat of relativity, and the whole saucer of its cream belonged to him by right and by legend, or so most people assume!"

Although Einstein's name is closely linked with the celebrated relation E = mc2 between mass and energy, a critical examination of the more than half dozen "proofs" of this relation that Einstein produced over a span of forty years reveals that all these proofs suffer from mistakes. Einstein introduced unjustified assumptions, committed fatal errors in logic, or adopted low-speed, restrictive approximations. He never succeeded in producing a valid general proof applicable to a realistic system with arbitrarily large internal and external (that is, translational) speeds. The first such general proof was produced by Max Laue in 1911 (for "closed" systems with a time-independent energy-momentum tensor) and it was generalized by Felix Klein in 1918 (for arbitrary time-dependent "closed" systems).

The above link is from a complete online text "Reflections on Relativity" by whom I'm not sure...Ken Brown/Kevin S. Brown from Cornell... http://www.mathpages.com/rr/rrtoc.htm .

And then I found this...

"Kevin Brown" of AstronomyCenter.org wrote..."This book examines the evolution of the principle of relativity in its classical, special, and general incarnations, both from a technical and a historical perspective, with the aim of showing how it has repeatedly inspired advances in our understanding of the physical world."