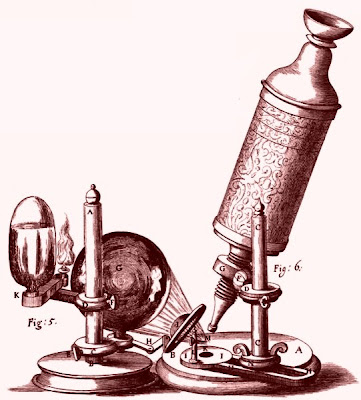 I offer this for two reasons: To become familiar with Robert Hooke and to present the text in a new and cool electronic presentation--a "flip book".

Robert Hooke (1635-1703) was an artist, biologist, physicist, engineer, architect, inventor and much else; a man who rubbed shoulders with many of the great minds of his time, and quarreled with most of them. Micrographia: or Some Physiological Descriptions of Minute Bodies made by Magnifying Glasses [1664] was Hooke's masterpiece, an exquisitely illustrated introduction to the microscopic world that lay all around.

The National Library of Medicine:

[Note: Not only can the pages be turned but also unfolded and by clicking the "zoom" icon a movable magnifier can be employed.] 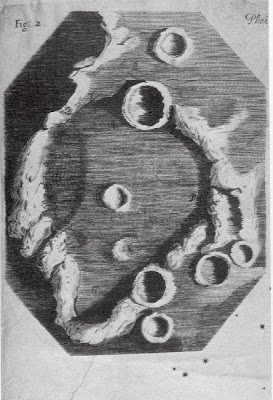 This seminal work on microscopy is more noted for its impressive engravings of magnified insects than for its contributions to lunar topography. The work, however, contains the very first attempt to delineate a particular lunar feature, in this case the crater Hipparchus, which is just south of the center of the moon. Hook also attempted to determine whether lunar craters were formed by impact or by volcanic action. He dropped balls into wet clay to simulate impact, and heated alabaster to produce bubbling volcanoes, and decided that the moon more closely resembled the pock-marked alabaster.

To make this drawing, Hooke used a 30-foot long telescope and observed just before first quarter, when the shadows were strong. His drawing can be favorably compared with those of later observers...and is a considerable improvement over the undefined circles that appear on the maps of Hevelius or Riccioli. Hooke further suggested that since the floor of Hipparchus reflected less light than the mountain tops, perhaps it was covered with vegetation and might be, in his words, a "fruitful place". 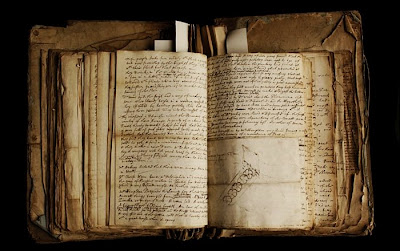 
The long-lost manuscript belonging to pioneering scientist Robert Hooke has returned to the Royal Society.

The hand-written notes are thought to contain a "treasure trove" of information about the early endeavours of the UK's academy of science.

A digitised version of the notes will eventually be available on the web.

The document, which had lain hidden in a house in Hampshire, was rescued from a public auction after a fundraising effort pulled in the £940,000 needed.

The "white knights" have been revealed as the Wellcome Trust, which gave £469,000, and 150 donors who came forward after the Royal Society appealed to its fellows and the general public.

The manuscript will now be rebound, transcribed and carefully analysed; and infrared scanning will be used to reveal some notes that have become illegible over time.

Robert Hooke, who died in 1703, was a polymath whose many contributions included coining the term "cell", devising a law of elasticity, creating spring regulators for time pieces; and designing several major buildings, such as the Monument to the Fire of London.

In 1662, Hooke became curator of experiments at the Royal Society, and he was later elected a fellow in 1664.

The fragile pages of the manuscript contain Hooke's notes of Royal Society meetings that took place in the 17th Century.

They are scattered with sketches and marginal observations, which the society hope will give insight into the man whose work crossed so many fields.

Professor Lisa Jardine, a historian from Queen Mary, University of London, and biographer of Robert Hooke, was the first person to alert the Royal Society to the existence of the document. She will be working with the society to analyse the notes.

"These are the records of what happened at the Royal Society between late 1677 and late 1682. There could well be a Newton experiment in there that nobody knows about," she said.

"Hooke was a colourful, controversial character. These minutes are more likely to tell us about his interactions with other people. For a biographer like me, they will give us a much fuller picture."

"I think, in terms of modern science, they will tell us about the origins of laboratory science, research team interaction, and how controversy and competition fuelled discovery. They will reveal the mechanics, the machinery of scientific discovery."

Professor Jardine said the manuscript might shed light on some of these disagreements.

"There are four pages which may tell us whether Hooke really had beaten Christian Huygens to a balanced spring watch for measuring longitude."

Martin Rees, president of the Royal Society, added: "The manuscript is significant to both scientists and non-scientists, and covers pioneering experiments relating to astronomy, gravity and microscopy."

"The descriptions of his experiments are the closest one could get to an original experiment without actually being there. We hope that scientists and non-scientists alike will soon be able to appreciate how exciting this discovery is."