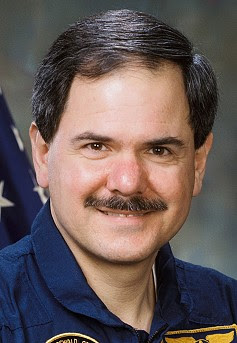 An astronomer and computer specialist, Parise was a developer of the UltraViolet Imaging Telescope. He flew on two Space Shuttle missions in 1990 and 1995 that used the telescope to study stars and other celestial objects.

He was born May 24, 1951, in Warren, Ohio. He earned a bachelor's degree in physics from Youngstown State University and master's and doctorate degrees in astronomy from the University of Florida.

Always interested in science and technology, he first earned his amateur radio license at age 11 and remained active in radio using the call sign WA4SIR, his wife, Cecelia said.

As a teenager, he became active in the Mahoning Valley Astronomical Society and built two telescopes. He also learned to fly and enjoyed piloting small aircraft until his disease became advanced, his wife said.

In 1984, he became a NASA payload specialist, working on several technical projects in addition to spending 614 hours in orbit and traveling 10.6 million miles in space. He spent 12 years with NASA before taking several other space, astronomy and computer-related jobs.

He and the former Cecilia Sokol met at Youngstown State University and married in 1973. Their son, Nicholas, is in the U.S. Air Force. Their daughter, Katherine, lives in Silver Springs.

Dr. Parise has flown in space twice as part of the ASTRO missions (ASTRO is not an acronym -- it is short for Astronomy). The first mission, ASTRO-1, was rescheduled for 1990 after the Challenger tragedy and finally launched aboard the space shuttle Columbia in the early morning of December 2. It was the beginning of 215 hours in space for Parise. Dr. Parise and his colleagues, Jeffrey Hoffman, Robert Parker and Samuel Durrance, operated a package of three ultraviolet telescopes housed in the cargo bay of the shuttle. They became the first astronomers to operate telescopes in space and observed 135 objects, including double stars, star clusters, galaxies, the planet Jupiter, Comet Levy and the 1987 supernova in the Large Magellanic Cloud.

ASTRO-2 was launched aboard the shuttle Endeavour in the early morning hours of March 2, 1995. It set the record for longest shuttle flight ever when it landed the afternoon of March 18 after 16 days in space. Parise and Durrance reprised their roles as payload specialists to operate the UIT, the Wisconsin Ultraviolet Photo-Polarimeter Experiment and the Hopkins Ultraviolet Telescope.

Ultraviolet observations identify hot and energetic sources in the universe, including those within our own solar system. Observations in these wavelengths can only be done from space because Earth's atmosphere absorbs ultraviolet radiation before it can reach the surface. The telescopes also targeted individual stars, stellar systems, nebulae, distant galaxies, quasars, and clusters of galaxies. One of the major discoveries of the ASTRO-2 flight was the detection of primordial helium in intergalactic space, confirming one of the major predictions of the Big Bang Theory.