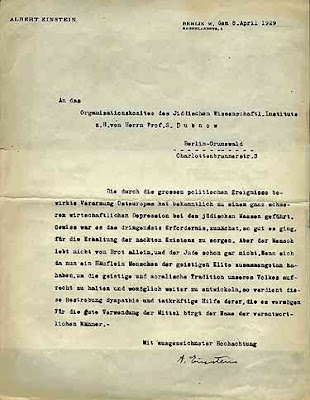 "I want to express to the Institute my recognition for its work in the service to the education and research of Jewish nation. I see the search for education as the principle goal of Jews and Institute's work, especially during these times of persecutions, is of utmost value".
Albert Einstein wrote while at Princeton in 1935 to YIVO
The YIVO Institute for Jewish Research was founded in 1925 in Vilna (Wilno, Poland; now Vilnius, Lithuania), by key European intellectuals, including Albert Einstein and Sigmund Freud, to record and study the history, language, literature, and culture of the Jews of Eastern Europe. In 1940, YIVO moved its permanent headquarters to New York City, becoming the only pre-Holocaust institution to transfer its mission to the United States from Europe. During World War II, several of YIVO’s leading scholars managed to escape from Nazi-occupied Europe and continue their work in the United States. The YIVO Library collection is ranked as the third largest Judaica collection in the Western Hemisphere with 385,000 volumes in 26 languages. The YIVO Archives holds over 24 million documents, photographs, recordings, posters, films, videotapes, and items of ephemera. These include the world’s largest collection of East European Jewish sound recordings; over 200,000 photographs; 400+ videos and films; and 50,000 posters documenting Jewish life from the 1900s to the present. YIVO is headquartered at the Center for Jewish History, 15 West 16th Street, New York, NY 10011-6301.