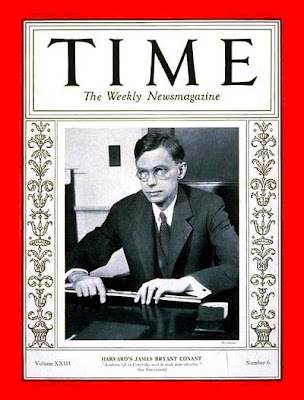 Not exactly a household name anymore but a very striking innovation came from him while he was president of Harvard:

As the university's president, Conant was instrumental in transforming Harvard, until then widely perceived as a 'finishing school' for members of the New England upper class, into a world-class research university. He introduced aptitude tests into the undergraduate admissions system so that students would be chosen for their intellectual promise and merit, rather than their social connections. Many American colleges followed Conant's lead, and this campaign led eventually to the adoption of the SAT.
He was a brilliant physical and organic chemist and was instrumental in the Manhattan Project. Unfortunately, from my perspective, he emphasized the sciences to the extreme and even changed the "...general undergraduate curriculum away from its traditional emphasis on the classics, and towards a more scientific and modern subject matter." A happy medium would have sufficed.

Chemist, diplomat, and educator, born in Dorchester (now part of Boston), Massachusetts, USA. A Harvard-educated organic chemist noted for his work on chlorophyll and haemoglobin, he taught at Harvard (1916–33) and was president there (1933–53), where he strengthened the professional schools, increased the geographical and social diversity of students, opened the university to women, and introduced curricular reforms. He chaired the National Defense Research Committee (1941–6), which developed the atomic bomb, and was instrumental in the targeting of Hiroshima, Japan. He also helped found the National Science Foundation (1950). His diplomatic career in the 1950s included four years as high commissioner and ambassador to West Germany. Finally turning toward the reform of public education, he conducted an extensive Carnegie Corp study of American high schools which resulted in The American High School Today (1959). His many other educational contributions include Slums and Suburbs (1961), The Education of American Teachers (1963), and The Comprehensive High School (1967).

His publications on organic chemistry are fascinating.

Here is a sample from:

ORGANIC SYNTHESES: AN ANNUAL PUBLICATION OF SATISFACTORY METHODS FOR THE PREPARATION OF ORGANIC CHEMICALS

He stated in the introduction "...the main object in this series is to give the most convenient laboratory methods for preparing various substances in one-half to five pound lots, an attempt has also been made to have these processes as far as possible adaptable to large scale development."

IN a 2-l. flask are placed 375 g. of commercial sodium dichromate, 225 cc. of water, and 300 g. of dichlorohydrin (b. p. 68-75'0/14 mm.). The flask is set in a water bath and equipped with a thermometer and mechanical stirrer. The contents are vigorously stirred, and 450 g. of sulfuric acid, diluted with 115 g. of water, are introduced during the course of seven to eight hours. It is convenient to add the acid at ten-minute intervals. The temperature is kept between 20'0 and 25'0 during the entire reaction; this is accomplished by adding a little ice to the water bath from time to time. The stirring is continued for sixteen to seventeen hours after all the acid has been added; as there is very little heat evolved during this part of the reaction, the water bath may be allowed to come to room temperature.

Sufficient water is now added to the mixture to dissolve the pasty chromium salts (300-800 cc.). The mass of crystals is then rapidly filtered on a Buchner funnel and sucked as dry as possible. The crystals are then transferred to a small laboratory centrifuge
and centrifuged for several minutes. The crystals are washed in the centrifuge with about 15-25 cc. of ice water, then with 10-15 cc. of cold petroleum ether, and finally centrifuged till as dry as possible. The crude dichloroacetone is dried in a vacuum desiccator over
sulfuric acid overnight It weighs about 220 g.

The crude product is best purified by distillation from a 250-cc. distilling flask fitted with an air condenser. A very small fraction (10-15 g.) of low-boiling material is obtained, and the dichloroacetone (170-175'0) is then collected. It solidifies in the receiver to a white crystalline mass which weighs 200-220 g. (65-70 per cent of the theoretical amount). A few grams more may be obtained by chilling the low-boiling fraction and filtering off the water.

Great caution should be exercised in working with dichloroacetone, as it is extremely lachrymatory and blisters the skin.

In transferring the crystals from the reaction flask to the Buchner funnel it is necessary to use a certain amount of water to dissolve the pasty chromium salts which are otherwise quite impossible to filter. The amount necessary varies greatly in different runs, according to the manner in which the chromium salts separate. The amount of this water is kept low in order to dissolve as little of the product as possible. Nevertheless, 10-15 g. of dichloroacetone are thus dissolved; this material, together with a little unchanged dichlorohydrin, may be recovered by a long procedure involving extraction with ether and sodium bisulfite. This is not profitable, however.

It is not necessary to wash the crystals in the centrifuge until they are white. A small amount of chromic salt will not interfere with the subsequent purification.

Commercial sodium dichromate is hygroscopic and contains varying amounts of water. The 375 g. required in these directions are equivalent to 319 g. of anhydrous material.

The total time required for the oxidation is twenty-four hours. It is convenient to start the reaction in the morning. In this way the last part of the reaction, which requires no attention, will be accomplished during the night. The regulation of the temperature is necessary, as the reaction proceeds very slowly below 20'0; on the other hand, the dichloroacetone itself is oxidized at a somewhat higher temperature than 25'0. 3.

Other Methods of Preparation