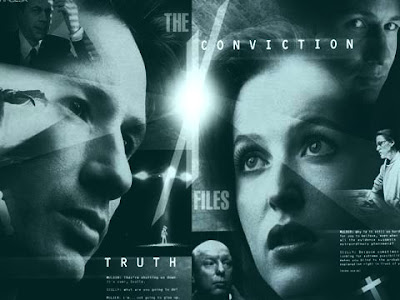 The men were air traffic controllers. Experienced, calm professionals. Nobody was drinking.

What they saw has never been explained. And they were so worried about losing their jobs that they demanded their names be kept off the official reports.

No one, they knew, would believe their claim that an unidentified flying object landed at the airfield they were overseeing in the east of England, touched down briefly, then took off again at tremendous speed.

But that's what they reported happening at four in the afternoon on April 19, 1984, at an unspecified small airport near the eastern coast of England. Their "Report of Unusual Aerial Phenomenon'' is one of more than 1,000 pages of formerly secret UFO documents released Wednesday by the National Archives.

The air traffic controllers, each with more than eight years on the job, describe how they were helping guide a small plane to a safe landing on runway 22 when they were distracted by a brightly lit object approaching a different runway without clearance.

"Everyone became aware that the object was unidentified,'' the report on the incident said. "SATCO (codename for a controller with 14 years experience) reports that the object came in 'at speed,' made a touch and go on runway 27, then departed at 'terrific speed' in a 'near vertical' climb.''

The incident is one of the more credible in the newly public files because it was reported by air traffic controllers, said David Clarke, a UFO expert who has worked with the National Archives on the document release.

"They were absolutely astonished,'' he said. "It was a bright, circular object, flashing different colors, and after it touched down it disappeared at fantastic speed. The report comes from very qualified people, and it's one of the few that remained unexplained.''

He said other incidents were at times reported by aircraft crews whose members also asked to remain anonymous because they did not want to jeopardize their careers by seeming to believe in UFOs.

In one case, the pilot of a commercial plane crossing the Atlantic reported an unidentified object just 1.5 nautical miles from his wing. He speculated that it might be a meteor or a missile.

Although there are some unexplained cases, there is no reported instance in which Britain's Ministry of Defense found any evidence of alien activity or alien spacecraft, said Clarke, who nonetheless expects conspiracy theories about a UFO coverup by the British defense establishment to persist.

"The Ministry of Defense doesn't have any evidence that our defenses were breached by alien craft,'' he said. "They never found one, no bits of one, that's all we can say.''

Clarke said the documents released Wednesday, dealing with the late 1970s and early 1980s, are the first batch of a series that will be made public in the next few years.

The National Archives is releasing the files now because of numerous Freedom of Information requests seeking information about the government's UFO reports. Officials said names of many individuals had been blacked out to protect their privacy and the entire files had been reviewed to make sure their release did not compromise national security.

Ministry of Defense officials indicate in the files that UFO reports were only investigated to make sure that no enemy aircraft had illegally entered British airspace. This was crucial during the Cold War when Russian planes posed an ongoing threat.

But officials say they did not try to solve the UFO riddles once an enemy attack had been ruled out.

The vast majority of the reports come from members of the public who see strange things in the sky and jump to the conclusion that a UFO is involved even though there is likely a logical scientific explanation for what they are observing, experts say.

"Mostly it's well-intentioned witnesses who are misidentifying things,'' said Nick Pope, another UFO expert who helped the Ministry of Defense investigate the phenomenon. "The most common things are aircraft lights, bright stars and planets, satellites, meteors, airships and things like that.''

Some of the reports are fairly easy to explain — and quite possibly influenced by a pint or two of beer. This was the case when a number of people leaving a Tunbridge Wells pub at 9:30 at night reported seeing a strange craft "with red and green'' lights.

Asked by police where it seemed to be traveling, the pub crawlers said it appeared to be heading for London's Gatwick Airport.

It didn't take a scientist to figure out it was a commercial plane making a routine approach.

I doubt if the truth is out there as claimed here...more of a psychological/social dependency? 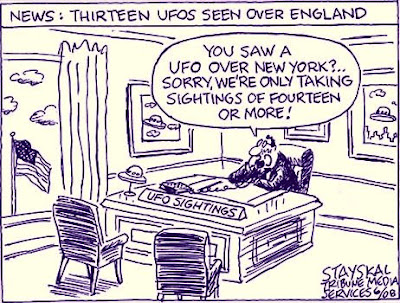 Every night I fall into slumber listening to Coast to Coast(radio program on all night) and it always amazes me the level of credulity the world has for this subject. The fact the callers and guests on this radio program come from the far corners of the world never ceases to enable me to drop almost immediately into blissful slumber...personally I have no use for UFOs but there is a part of me that longs for a real encounter such as the wonderful movie "The Day The Earth Stood Still". I hope our alien visitors are as such....peaceful and intelligent. We could learn a lot from the exchange.

The fact of the matter is that not one shred of physical evidence has been presented. Why not? Because there isn't any evidence. But wait...what if it is a government coverup to shield the public from some horrible event that has been revealed to the government officials. That's a common and favorite excuse. Great conspiracy theory materials.

Has it ever occurred to anyone to attempt to understand these events historically and in an individual and social context. The phenomenon is relatively recent and sort of coincides with world stress [the Cold War and possibility of total annihilation] and the disintegration of mainstream religion. Religion has failed to yield what society needs and we cast our eyes to friendly visitors from a distant planet that will come as our saviour and resolve individual and societal fears and defuse the world's hazardous political situation. Isn't it strange how the mostly good aliens resemble humans. Remember ET and how much ET resembles a baby--larger than normal head. The nasty aliens may well represent something else. Maybe the frequency of sightings will increase when global terrorists strike at home more frequently with greater ferocity.

"The Day the Earth Stood Still"--yep, a good film. I do champion "Forbidden Planet" with the uncontrollable "Id". Besides, having Robbie around could be an advantage.

If humans are the only "intelligent" life in the universe we're all in deep trouble. We haven't even learned how to live together without slaughtering each other. My opinion, and its purely conjecture, is that we're just some grade school alien's biology project - like the ant farm my class had in kindergarten. To believe that humans are the only game in the universe is dangerously grandiose - hmmm, who does that remind me of???

Don't take my word for the existence of intelligent extra terrestrial life watch what these dozen or so professional eye witnesses say about the issue, many of whom have top secret clearance. What they've seen and describe is clearly beyond our technological capabilities, and these are the people who would know what those capabilities are - they helped create them.

Google: "2001 National Press Club Disclosure Project Video". This video pretty much removed any doubts I had about this issue. These people are credible, and were on the "inside". "In-The-Know" is the phrase used.

It's about time we grew up don't you think?