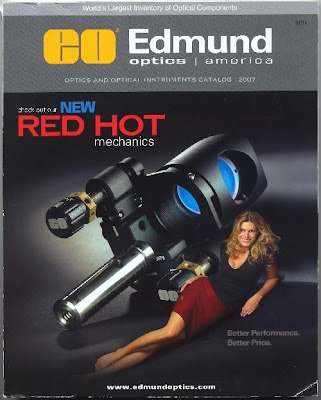 Edmund catalog 2007
Science is littered with gender issues...women having a tough time attending academic institutions, being given deserved equality, and recognition of scientific achievements. Recall the high profile women scientists Rosalind Franklin and Lise Meitner . Fortunately, things are changing. However, sexism still appears as in the 2007 Edmund catalog of optics.

As representatives of Edmund Optics, I hope you will pass the following message to the appropriate management at Edmund Optics.

I just saw the images from the Edmund Optics catalog that show a woman in a tight red skirt lounging next to some optical
devices, some with the caption, "Red Hot". I hope Robert Edmund and the board of directors of Edmund can be alerted to this problem.

As a scientist and professor at UC Berkeley I am embarrassed on behalf of the many female science students coming along. I wonder what message such images of sex objects in your ads send to bright young scientists
of both genders.

Moreover, after decades of overt discrimination against women in the physical sciences, including precluding their admission to the best universities and the denial of access to the world's best telescopes, your ad represents a setback. It reminds us of a dark era of clear discrimination against women, a time that I'm sure Edmund Optics hopes is long gone. If so, you have made a very serious error that insults the scientific community.

As you can imagine, your ad has already generated extraordinary discussion in the scientific community, analogous to the discussion over the comments by Harvard's president who implied that women might not have what it takes to be great scientists. In short, your company has left open the question of your equal and unbiased treatment of women in your company and in your contracts.

Thank you for your feedback regarding the EO catalog and our recent cover. No need to be embarrassed for the many female science students coming along. Rather, encourage them to celebrate that another smart, young, and attractive female has joined the ranks of women in a technical field, which breaks the pattern of discrimination you describe. You see, the woman featured on the cover is a six-year employee of Edmund and our Trade Show Manager and Spokesperson. Over the years we've received numerous positive comments and she has proven herself to possess the needed technical and social ability to successfully coordinate our tradeshows that showcase our products.

The recent cover photo emphasized a new product launch by Edmund. Our Trade Show Manager coordinated the showcase of these products at Photonics West last month. Had you happened by our booth for a visit, you would have had the opportunity to meet and speak with her about our Kinematic mounts as well as receive additional technical information from two other smart, young, and attractive, female optical engineers present at the time. So that you know, this line of Kinematic Optical Mounts, Table Platforms, and Mechanical Accessories are technically situated to become the standard for optical positioning equipment in the marketplace. We are excited about the quality, features, and price of these products and know that they will be very difficult to compete with and we chose our Trade Show Manager to help commemorate their release.

Professor Geoff, please encourage ALL of your female students to join the technical, engineering, and science ranks. There are too many that fall prey to the stereotypical concepts of what a person should look like or dress like which keep them from significant contributions in our society. That said, we value the opinions of our customers and we evaluate the feedback in developing our future strategies. I appreciate the time you have taken to mention your concerns here. I hope you will take the opportunity to encourage your female students to meet our female optical engineers at Edmund Optics. I think they, and you, will be impressed with their ability to support and represent woman [sic] in engineering.

Bill's response is apologetic and represents a common feature of commerce...that sex sells. A pretty girl will draw attention for sure and that perspective will be a lot harder to change than seeing equality in the academics of the sciences. Making money is a way of life and many venues are employed...including an attractive woman.

Two positive notes of women in the sciences: 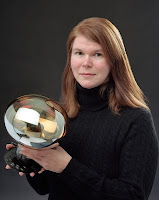 Janet Conrad
"I'm not your typical physicist,"says Janet Conrad, the 36-year old Columbia University physicist best known for her neutrino physics research at Fermi National Accelerator Laboratory in Batavia, Ill. "If you were to pick out the kid in the class who would be a physicist, you wouldn't pick me."

Conrad is a young, female physicist in a field that even today is overwhelmingly male. She says, though, that it is more than just a matter of gender that sets her apart. It is a gift for explaining the esoteric concepts of particle physics in simple, everyday terms for the general public.

"I've always thought I was a little different from those in my classes, and I've learned to use it, to bring something to physics," Conrad says. "People like the way I explain things. I think it is an unusual ability in the field of physics."

She also finds physics research fun, something she says derives from a deep love for the work she does.

"I am very focused and I've been in love with this stuff from the time I first arrived at Fermilab after my junior year in college," Conrad says. "I think it is fun and I want the everyone else to think it is fun, too."

Today Conrad is one of the chief scientists on a project at Fermilab to determine whether or not the neutrino has mass. That is, she wants to know if the neutrino "weighs" anything or if, as has been believed until recently, it has no mass whatsoever.

The neutrino is a ubiquitous but incredibly elusive subatomic particle whose existence was first "discovered"in 1930 merely as a way to balance the energy amounts of a physics equation. It was not until 1953 that the first neutrinos were detected in an actual experiment.

Neutrinos permeate the Universe. Conrad says there are believed to be about a million of them in every "gallon" of space. Over a million trillion of them whiz through you every day. Nevertheless, these ghostly particles are almost impossible to detect because they so rarely interact with ordinary matter. In the so-called "Standard Model"—the basic conceptual framework that physicists use to describe all the fundamental particles in the universe—the neutrino has zero mass.

However, there are reasons to believe that the neutrino may indeed have a non-zero mass. What's more, Conrad says, no matter how incredibly small that mass may be, because there are so many neutrinos, the way physicists understand the structure of the physical universe would be profoundly altered. The Standard Model itself would need to be substantially revised.

"We don't know how to put a neutrino [with mass] in our Standard Model,"she says. "In the Standard Model they are massless, but there is no compelling theoretical reason for that."

Conrad herself has been likened to a photon—the zero mass particle that travels at the maximum possible speed and is the carrier of all electromagnetic radiation, including visible light. If the energetic Conrad and her colleagues find a positive result—that is, if they show that the neutrino does have mass—then they will be responsible for a fundamental revision in how scientists understand and describe our universe. 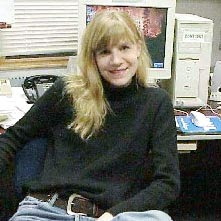 Mitsuyoshi Tanaka Dissertation Award [2003]
"For her contributions to the precision measurement of the weak mixing angle in neutrino-nucleon interactions. This work provides the most accurate measurement to date of the weak mixing angle using this technique. The value lies three standard deviations away from global electroweak fits, suggesting the existence of physics contributions from beyond the standard model."

Geralyn "Sam" Zeller graduated from Northwestern University with a B.A. in Physics in 1994. Dr. Zeller performed her doctoral work also at Northwestern University, receiving her Ph.D. in 2002. This work was completed on the NuTeV experiment at Fermi National Accelerator Laboratory (Fermilab) under the supervision of Professor Heidi Schellman. Her dissertation, entitled "A Precise Measurement of the Weak Mixing Angle in Neutrino-Nucleon Scattering," achieved unprecedented precision for a neutrino-nucleon scattering experiment. Continuing her passion for neutrino physics, Dr. Zeller is currently a collaborator on the Booster Neutrino Experiment (MiniBooNE) at Fermilab and a postdoc at Columbia University.

Dr. Zeller's dissertation made use of the high statistics samples of neutrino and antineutrino data collected at the NuTeV experiment to greatly minimize systematic uncertainties. As a result of this strategy, Sam's thesis represents the most precise neutrino measurement to date of the fundamental constant which relates the W and Z boson masses in the standard model of particle physics. This now-published result shows a deviation with respect to the standard model expectation (based on all other precision electroweak measurements) that is significant at the level of three standard deviations. The result has thus sparked much interest in the international particle physics community.

More recently, Dr. Zeller has been working on measuring and modeling low-energy neutrino interaction cross sections at MiniBooNE. She looks forward to seeing results from this new experiment.

While at Northwestern, Dr.Zeller was a Pew Science Fellow and a member of the Society of Physics Students (SPS). As an undergraduate, she was elected to the Phi Beta Kappa society and Sigma Pi Sigma, the national physics honor society. Dr. Zeller's doctoral work was partially supported by a Department of Education graduate fellowship.