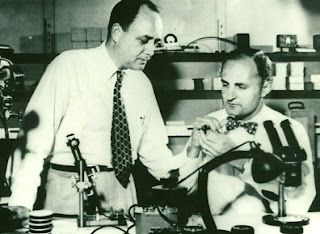 Douglas Martin
Morgan Sparks, who made critical contributions to developing the second-generation transistor, which became a building block of modern electronic devices, died on Saturday at his daughter’s home in Fullerton, Calif. He was 91.

The cause was congestive heart failure, his son Gordon said.

In 1947, transistors were invented at Bell Telephone Laboratories, the research arm of AT&T. They were intended to replace the vacuum tube as a device to control electric current. Vacuum tubes had made radios, long-distance calling and other modern amenities possible, but used lots of power, operated at hot temperatures and burned out rapidly.

As part of the scientific team led by William Shockley, the Bell labs scientists Walter Brattain and John Bardeen used semiconductors in the first patented transistor. Semiconductors are so called because they are poorer carriers of electricity than conductors like copper, but not poor enough to be called insulators.

A transistor is like a controllable valve by which a weak signal controls a much larger flow. By turning on and off, transistors signal the ones and zeros that combine to signify information stored in a computer.

Transistors quickly proved to be much more efficient than vacuum tubes, and never stopped leaping in efficiency. A microchip can contain hundreds of millions of transistors integrated in design through which transistors successively and almost instantaneously amplify electrical signals to do things as diverse as operate a microwave oven or control slipping car wheels.

But the first transistors depended on two hair-thin wires resting on a tiny speck of germanium, the initially preferred semiconductor material. Despite having much greater amplifying power than vacuum tubes, those early transistors were noisy in an electronic sense and unreliable. They were also very fragile, unsuitable for use in consumer products.

Dr. Shockley conceived of a totally different approach, beginning in early 1948 with solitary work in a Chicago hotel room as a meeting of the American Physical Society was held downstairs.

The new transistor would look like a sandwich, with two layers of one type of semiconductor surrounding a second kind. But Dr. Shockley's team had to address challenge upon challenge. The first was proving that electricity could travel straight across a crystal instead of around the surface. Richard Haynes, a physicist, was a leader in this.

Gordon Teal, working with the engineer John Little, figured out how to build a large single crystal of germanium, an achievement that meant current flow could last up to 100 times longer than it had in the old cut crystals.

Dr. Sparks worked with Dr. Teal to develop techniques to add impurities to crystals to control the electrical flow. Dr. Sparks also found a way to make the middle layer of the semiconductor sandwich thinner than a sheet of paper, which prevented the current from becoming unfocused.

In Philadelphia, on Dec. 31, 1951, Bell announced its improved transistor, calling it a junction transistor. It amplified a signal 100,000 times and occupied just 1/400th of a cubic inch. By contrast, a typical subminiature vacuum tube occupied about an eighth of a cubic inch.

"Transistors of this type," Dr. Shockley said, "are much more efficient than the older type and consume far less power."

Soon, the new junction transistors were in countless portable radios, and their distant descendants are now in thousands of other kinds of useful devices.

Morgan Sparks was born on July 6, 1916, in Pagosa Springs, Colo., where his father owned a hardware store. His quick intelligence led to his skipping first and fifth grades. When he was 9, the family moved to Harlingen, Tex., where Mr. Sparks attended a nearby community college for a year, working at a soda counter to pay expenses.

He won a scholarship to Rice University, where he earned his bachelor's and master's degrees in chemistry. He then earned his doctorate in physical chemistry at the University of Illinois, Urbana-Champaign, in 1943 as a Rockefeller Foundation fellow.

He next joined Bell Labs, where he first worked on electrical storage experiments involving elements like tantalum and niobium, then called columbium. He was also assigned to wartime projects like developing batteries that could operate in seawater, for electric torpedoes and downed-aviator missions.

In 1997 interview with Electronic Engineering Times, Dr. Sparks said there were monthly meetings on the transistor projects involving chemists, physicists, metallurgists and electronics engineers. Dr. Shockley met with his group at least once a week. Dr. Sparks remembered Dr. Shockley as having greater insight into materials than anybody he had known.

Dr. Sparks moved up the management ladder, and in 1972 was sent to New Mexico as president of Sandia National Laboratories, which was then managed by AT&T. In 1981, he retired from the Bell system to be dean of the Robert O. Anderson School of Management at the University of New Mexico.

Dr. Sparks's wife of 57 years, the former Elizabeth MacEvoy, died in 2006. In addition to his son Gordon, who lives in Waitsfield, Vt., he is survived by another son, Morgan, of Burlington, Vt.; his daughters Margaret Potter of Waitsfield and Patricia Fusting of Fullerton, Calif.; and six grandchildren.

Mr. Sparks's wife was a secretary at Bell Labs during his early years there. While the scientists and engineers created modern electronics, the scientists kept her busy changing the keys on her typewriter to register foreign languages and exotic mathematical symbols.
Posted by Mercury at 5:50 AM