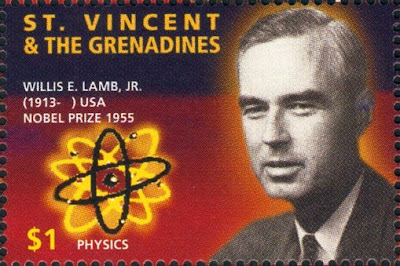 Kenneth Chang
Willis E. Lamb Jr., who shared the 1955 Nobel Prize in Physics for the discovery of a slight and subtle discrepancy in the quantum theory describing how electrons behave in the hydrogen atom, died on Thursday in Tucson. He was 94.

The cause was complications of a gallstone disorder, according to the University of Arizona, where Dr. Lamb was an emeritus professor of physics and optical sciences.

Although the discrepancy, which became known as the Lamb shift, in the hydrogen atom was slight, it was one of the first direct experimental signs that empty space is not empty. Instead, empty space roils with "virtual particles" that pop into and out of existence too quickly to be detected. The Lamb shift results from the virtual particles' bumping into an electron orbiting in the hydrogen atom and altering its orbit slightly.

The discovery of the Lamb led to a rethinking of quantum mechanics and the development of quantum electrodynamics, which incorporated the virtual particles into the modern theory of electricity and magnetism.

Dr. Lamb’s research crossed many subjects in theoretical physics, including lasers, the scattering of neutrons off crystals and how to make the most precise measurements of objects or processes, given the intrinsic uncertainties of quantum mechanics.

His laser work, for instance, predicted another effect that bears his name, the Lamb-Bennett dip. The dip describes how the intensity of a laser drops under certain circumstances. It turned out that a colleague, William Bennett, had already observed that effect experimentally. The Lamb-Bennett dip has been used to set laser frequencies with great precision.

"Lamb would take the process apart in his mind," said William Wing, a professor of physics and optical sciences at Arizona. "Often he would discover new effects by careful thinking at a very deep level."

Willis Eugene Lamb Jr. was born on July 12, 1913, in Los Angeles. He received a bachelor’s in chemistry from the University of California, Berkeley, in 1934 and a doctorate in theoretical physics, also from Berkeley, in 1938.

He then became an instructor and, later, a professor at Columbia. At Columbia in the summer of 1946, he came up with the idea for the experiment that discovered the Lamb shift.

Physics of the 20th century revolved around two theories: quantum mechanics, which described how the smallest bits of matter behave, and relativity, which describes the odd effects that occur at speeds close to that of light. In the 1920s, Paul Dirac, an English physicist, combined the two in a relativistic quantum theory of hydrogen, the simplest of atoms, with a single electron orbiting a single proton. The theory predicted much of the observed behavior of hydrogen, in particular the energies that the orbits of the electron could be pushed into.

One prediction of Dirac’s theory was that two of the excited orbits would have exactly the same energy. Other scientists, who were thinking about virtual particles, suspected that there might be a difference.

To test that theory, a graduate student, Robert C. Retherford, built the experiment, which used microwave technology developed in World War II for radar. In April 1947, the experiment found there was indeed a slight difference in energy between the two orbits generated by differences in how the electrons interacted with the ephemeral virtual particles.

His first wife, Ursula Schaefer Lamb, died in 1996. A marriage to Bruria Kaufman, a physicist he met at Columbia in 1941, ended in divorce. He married Elsie Wattson, whom he met 27 years ago, on Jan. 26. Also surviving is a brother, Perry, of Maine.

It was in November 1955 that an early morning call from Stockholm announced that Dr. Lamb had won the Nobel. He went back to bed and slept two more hours.

He shared the prize, and the accompanying $36,720, with Polykarp Kusch, who discovered other effects of the virtual particles in a different experiment.

Hamish Johnston
Willis Lamb, who won the 1955 Nobel Prize in Physics "for his discoveries concerning the fine structure of the hydrogen spectrum", died last week at the age of 94.

In 1947, Lamb discovered the famous "shift" in the hydrogen spectrum that bears his name. The Lamb shift provided important experimental evidence for the then emerging theory of quantum electrodynamics (QED).

Like many physicists of his generation, Lamb worked on radar technology during the Second World War. After the war, he turned his microwave expertise to the study of the hydrogen atom. While working at Columbia University in New York, Lamb found that the 2S1/2 electron energy level in hydrogen was slightly higher than the 2P1/2 energy level. This shift was not predicted by relativistic quantum mechanics, which had been used two decades earlier by Paul Dirac to explain the fine structure of the hydrogen atom.

Instead, the Lamb shift provided crucial evidence for the new theory of QED, which describes the interactions between charged particles in terms of the exchange of photons. Ten years later, Julian Swinger and Richard Feynman of the US and Sin-Itiro Tomonaga of Japan shared the 1965 Nobel Prize in Physics for their work on QED — and, in particular, its use in explaining the Lamb shift.

Lamb was born on 12 July, 1913 in Los Angeles and spent his formative years in California. In 1938 he gained PhD in nuclear physics from the University of California at Berkeley under the supervision of Robert Oppenheimer. Lamb then joined the physics department at Columbia University, where he did his Nobel-prize work at the Columbia Radiation Laboratory.

Lamb shared the 1955 Nobel Prize with his Columbia colleague Polykarp Kusch, who won for his independent work on using microwave techniques to determine the magnetic moment of the electron.

Lamb left Columbia in 1951 for Stanford University in California and over the next 22 years he held positions at Harvard, Yale and Oxford. In 1974, Lamb joined the School of Optical Sciences at the University of Arizona, where he remained until his retirement in 2002.

Lamb died on 15 May, 2008 in Tucson, Arizona and is survived by his wife Elsie and brother Perry.