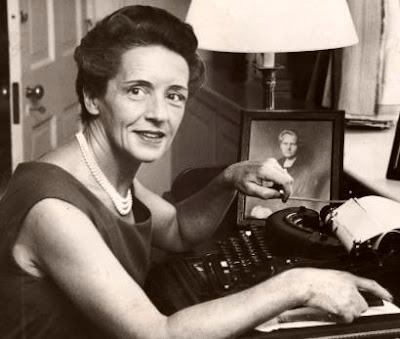 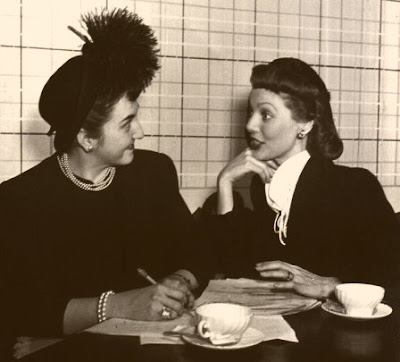 Many years ago when I was married my wife Janus had some interesting relatives: A fine printer/engraver...cousin John [who was visited by the United States Treasury Department on a regular basis] and a curious woman who was a pioneer in early radio...cousin Virginia [Gini]. John lived to be over 100 and a victim of a greedy city social worker. Gini suddenly dropped out of the radio business in the late 1950's to return to the city to care for her elderly aunts. The aunts passed away and Gini took up quarters in a somewhat rundown housing project in a converted hotel. That's where I came into the picture. In time she inherited a house and some property in California and moved there. The clean out process for her move was difficult and thousands of radio scripts were headed for the dumpster. That prompted swift action on my part to rescue them. They had been thrown into four large trash bags totally filled and weighed figuratively a ton each. Nevertheless, I rescued the items and spent the next four years sorting and cataloging. Among the scripts was a large collection dedicated to the old Betty Crocker Magazine of the Air that featured cooking tips, light banter, and prominent guests. One of the guests was Marie Curie's daughter Eve. So for a bit of diversion, here is the entire script. 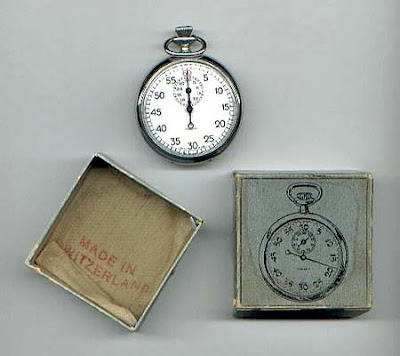 Betty Crocker Magazine of the Air

February 18th, 1949
[Right click and open in a new window for better reading.] 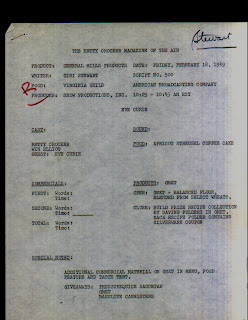 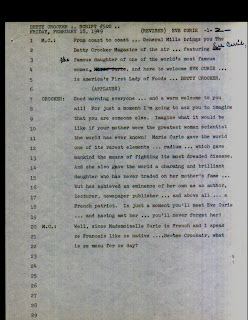 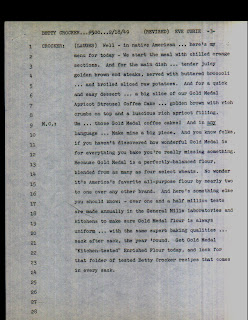 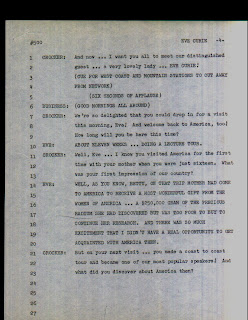 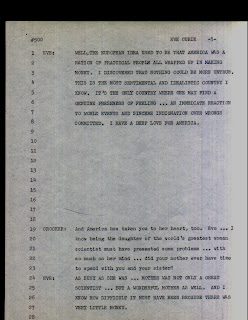 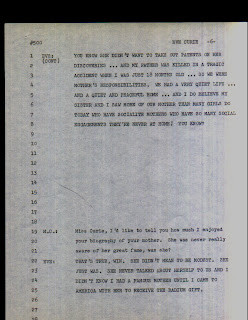 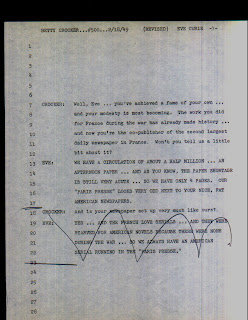 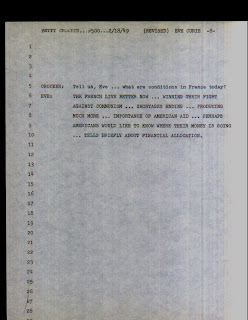 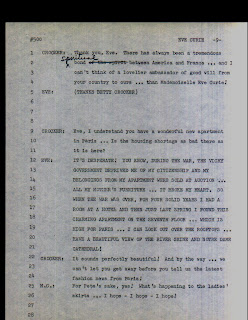 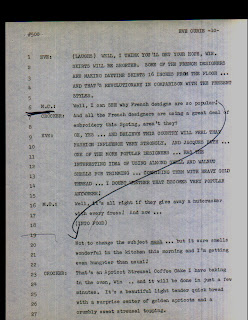 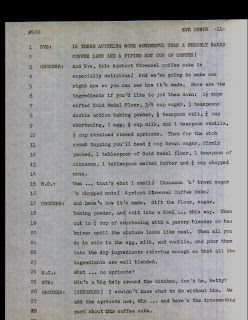 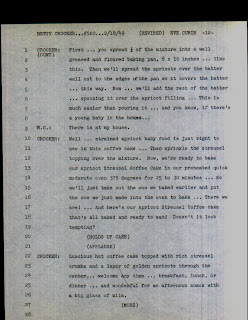 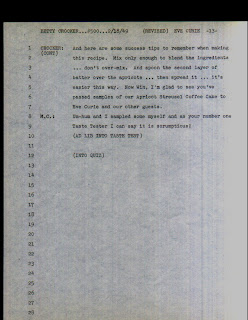 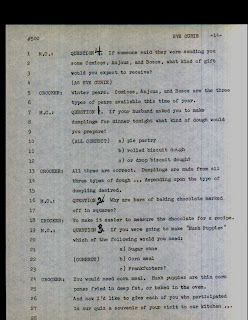 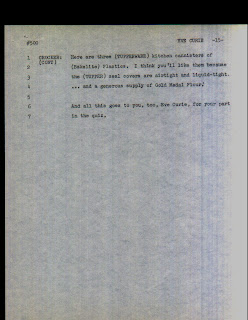 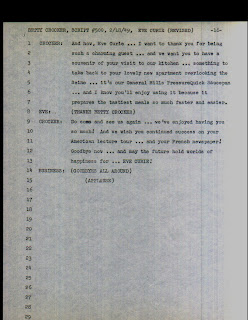 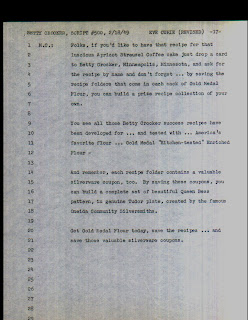 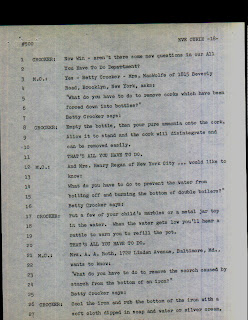 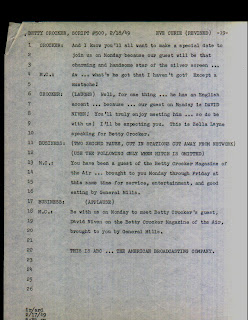 The New York Times
Eve Curie Labouisse, a journalist and humanitarian best known for her biography of her mother, the Nobel Prize-winning scientist Marie Curie, died on Monday at her home on the Upper East Side of Manhattan. She was 102.

Published in 1937, Madame Curie chronicled the life of Marie Curie, who earned the Nobel Prize twice, first in physics in 1903 (the award was shared with her husband, Pierre Curie, and Henri Becquerel) and again in chemistry in 1911.

Mrs. Labouisse's admiring portrait followed her mother (née Marya Sklodowska) from her birth and girlhood in Poland through her education in France and her discovery, with her husband, of the radioactive elements radium and polonium. The book quickly became a best seller and in 1943 was made into a Hollywood film, starring Greer Garson as Marie and Walter Pidgeon as Pierre.

Reviewing the book in The New York Times (it was published by Doubleday, Doran & Company in 1937 in an English translation by Vincent Sheean), Charles Poore called it "a biography that stirs the heart and the mind by a fine counterpoint of sense and sensibility, a great story superbly told."

In the 70 years since its publication, Madame Curie has endured as a classic of scientific biography, devoured by generations of academically minded girls. Some modern critics, however, have taken it to task for drawing a veil over the less saintly aspects of Marie Curie's life, notably her passionate affair with a married man in the years after Pierre's death. Though the affair was a huge public scandal in France at the time, Mrs. Labouisse's biography, published three years after her mother died, does not mention it.

In wide demand as a lecturer after Madame Curie was published, Mrs. Labouisse was also known for her staunch public advocacy of the Free French cause after the Nazis occupied France in 1940. After the war, she was a publisher of the French newspaper Paris-Press, and in the early 1950s was a special adviser to the secretary general of NATO.

Her other books include Journey Among Warriors (Doubleday, Doran, 1943), a best-selling account of her 40,000-mile trip across a series of wartime fronts: North Africa, Iraq, Iran, Russia, India, Burma and China.

Throughout her life, Mrs. Labouisse appeared to have taken her famous family in stride. "You are not mixing me up with my sister by any chance?" she asked an interviewer in 1972. "You see, I am the only one of the family not to have won a Nobel Prize." (In 1935, Mrs. Labouisse's older sister, Irène Joliot-Curie, and her husband, Frédéric Joliot, won the Nobel Prize in chemistry for their synthesis of new radioactive elements.)

But Mrs. Labouisse had abundant talents of her own. Originally trained as a concert pianist, she performed throughout France and Belgium as a young woman and later wrote music criticism for several French periodicals. She was also considered to have been one of the most beautiful women in Paris in the 1920s and '30s.

Eve Denise Curie was born in Paris on Dec. 6, 1904. She scarcely knew her father: in April 1906, while crossing a rain-slicked street, Pierre Curie slipped under the wheels of a passing horse-drawn wagon and was killed. Madame Curie, her daughter later said, could not bear to speak of him and plunged herself even more deeply into her work.

Mrs. Labouisse would later say that as a child she saw little of her mother, becoming close to her only as a teenager and afterward, as she nursed her through her final illness. Marie Curie died in 1934, at 66, of leukemia, which was believed to have been caused by her prolonged exposure to radioactive material.

In 1940, after France fell, Eve Curie went to England to work for the Free French. She later served in Europe with the women's division of Gen. Charles de Gaulle's Fighting French. In May 1941, the Vichy government revoked her French citizenship; she eventually settled in the United States.

In 1954, Eve Curie married Henry Richardson Labouisse, who was later the United States ambassador to Greece. From 1965 to 1979, Mr. Labouisse was the executive director of Unicef, and it was he who accepted the Nobel Peace Prize when it was awarded to Unicef in 1965.

Mr. Labouisse died in 1987. Besides her stepdaughter, Ms. Peretz, of Cambridge, Mass., Mrs. Labouisse is survived by four stepgrandchildren and 11 stepgreat-grandchildren. Her only sibling, Irène Joliot-Curie, died in 1956, at 58, of leukemia, which was believed to have been caused by her prolonged exposure to radioactive material.

To the end of her life, her stepdaughter said, Mrs. Labouisse felt enormous guilt that she alone among the women in her family had escaped a life of radiation and its consequences.


Madame Curie A Biography
Posted by Mercury at 3:31 PM