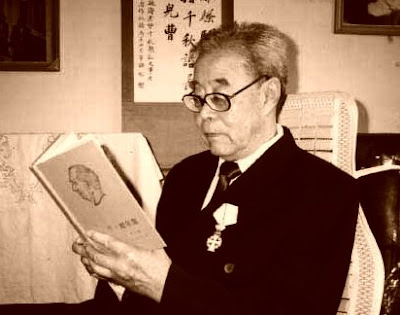 The history of science is littered with little unknown items and such is the case here...the Chinese translator of the works of Neils Bohr...Professor Ge Ge.

Volume XXXIII, No. 2, Fall 2001
Ge Ge, a Professor at the Graduate School at the East-China Petroleum Institute in Beijing, has devoted his energies to translating all of Niels Bohr's works into Chinese. Born in 1922 and trained as a physicist, Ge Ge was long fascinated by Bohr's discoveries and philosophy. In the early 1960s on his own initiative he undertook to translate some of Bohr's writings for the benefit of Chinese-speaking people. Unfortunately in the stormy politics of the time Bohr came to be seen as a reactionary, and Prof. Ge was required to publish a personal disagreement with Bohr. The result was that he got still more curious about what Bohr really intended. He went on to translate two more books, but these had to await publication until after the Cultural Revolution. During those years Ge Ge, like other university teachers, was compelled to do hard physical labor.

After the Cultural Revolution Prof. Ge resumed teaching and encountered no further political problems. But funds were lacking, and he was able to publish only the first two volumes of Bohr's Collected Works in Chinese, using local funds. Meanwhile further volumes of Bohr's works were published. Prepared by the Niels Bohr Archive in Copenhagen and with the Archive's director as General Editor, the Collected Works are now up to volume 10 with volume 11, the last, forthcoming. Fortunately, Prof. Ge was allowed to make three extended trips to visit the Niels Bohr Archive in Denmark, and found a variety of private foundations willing to support his work. He continues indefatigably, despite age and faltering eyesight, completing the Chinese translation of each volume of the Collected Works even before the original gets into print. Meanwhile he has trained himself as a historian of science, publishing extensive commentaries on Bohr's thought and related issues.

Prof. Ge finds Bohr's world of ideas so intricate that he is wary of losing the thread if he takes even a short break from his translation work. Yet he has retained his broad cultural interests, which include Chinese poetry, Chinese art, and the Beijing opera. He is also a copious producer of carved Chinese signature seals.

Preserving the Heritage of Discovery
Posted by Mercury at 10:13 AM

This is what reaffirms my faith in humans....