Einstein, the Laskers, and chess 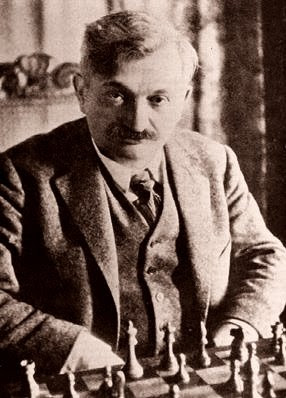 Emanuel Lasker
December 24th, 1868 to January 11th, 1941
If the following is true, what a bizarre situation. Einstein did play chess and was a good friend of Edward Lasker [famous chess player] and gave Einstein an autographed copy of his book Go and Gomoku [1934]. Einstein returned the gift with an autographed copy of one of his papers on relativity. Now the bizarre part. At some time later the Lasker book showed up in a used bookstore. Lasker was informed of the situation in which he replied that it was not a problem for he left the Einstein gift on the subway. True? Don't know, but it is a good story.

Now Emanuel Lasker, a close friend of Einstein's and no relation to Edward Lasker, passed away and Einstein wrote the following preface to the posthumous biography Emanuel Lasker, The Life of a Chess Master by Dr. Jacques Hannak [1952].

Emanuel Lasker was undoubtedly one of the most interesting people I came to know in my later years. We must be thankful to those who have penned the story of his life for this and succeeding generations. For there are few men who have had a warm interest in all the great human problems and at the same time kept their personality so uniquely independent.

I am not a chess expert and therefore not in a position to marvel at the force of mind revealed in his greatest intellectual achievement - in the field of chess. I must even confess that the struggle for power and the competitive spirit expressed in the form of an ingenious game have always been repugant to me.

I met Emanuel Lasker at the house of my old friend, Alexander Moszkowski, and came to know him well in the course of many walks in which we exchanged opinions about the most varied questions. It was a somewhat one-sided exchange, in which I received more that I gave. For it was usually more natural for this eminently productive man to shape his own thoughts than to busy himself with those of another.

To my mind, there was a tragic note in his personality, despite his fundamentally affirmative attitude towards life. The enormous psychological tension, without which nobody can be a chess master, was so deeply interwoven with chess that he could never entirely rid himself of the spirit of the game, even when he was occupied with philosophic and human problems. At the same time, it seemed to me that chess was more a profession for him than the real goal of his life. His real yearning seems to be directed towards scientific understanding and the beauty inherent only in logical creation, a beauty so enchanting that nobody who has once caught a glimpse of it can ever escape it.

Spinoza's material existence and independence were base on the grinding of lenses; chess had an analogous role in Lasker's life. But Spinoza was granted a better fate, because his occupation left his mind free and untroubled, while, on the other hand, the chess playing of a master ties him to the game, fetters his mind and shapes it to a certain extent so that his internal freedom and ease, no matter how strong he is, must inevitably be affected. In our conversations and in the reading of his philosophical books, I always had that feeling. Of these books, The Philosophy of the Unattainable interested me the most; the book is not only very original, but it also affords a deep insight into Lasker's entire personality.

Now I must justify myself because I never considered in detail, either in writing or in our conversations, Emanuel Lasker's critical essay on the theory of relativity. It is indeed necessary for me to say something about it here because even in his biography, which is focused on the purely human aspects, the passage which discusses the essay contains something resembling a slight reproach. Lasker's keen analytical mind had immediately clearly recognized that the central point of the whole question is that the velocity of light (in a vacuum) is a constant. It was evident to him that, if this constancy were admitted, the relative of time could not be avoided. So what was there to do? He tried to do what Alexnder, whom historians have dubbed "the Great," did when he cut the Gordian knot. Lasker's attempted solution was based on the following idea: "Nobody has any immediate knowledge of how quickly light is transmitted in a complete vacuum, for even in interstellar space there is always a minimal quantity of matter present under all circimstances and what holds there is even more applicable to the most complete vacuum created by man to the best of his ability. Therefore, who has the right to deny that its velocity in a really complete vacuum is infinite?"

To answer this argument can be expressed as follows: "It is, to be sure, true that nobody has experimental knowledge of how light is transmitted in a complete vacuum. But it is as good as impossible to formulate a reasonable theory of light according to which the velocity of light is affected by minimal traces of matter which is very significant but at the same time virtuallt independent of ther density." Before such a theory, which moreover, must harmonize with the known phenomena of optics in an almost complete vacuum, can be set up, it seems that evey physicist must wait for the solution of the above-mentioned Gordian knot - if he is not satisified with the present solution. Moral: a strong mind cannot take place of delicate fingers.

But I liked Lasker's immovable independence, a rare human attribute, in which respect almost all, including intelligent people, are mediocrities. And so I let matteers stand that way.

I am glad that the reader will be able to get to know this strong and, at the same time, find and lovable personality from his sympathetic biography, but I am thankful for the hours of conversation which this ever striving, independent, simple man granted me.