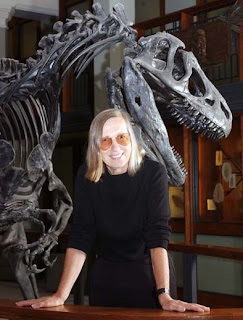 Gerta Keller
It is popular to believe that the extinction of the dinosaurs was the result of a catastrophic event roughly 65 million years ago [Cretaceous-Tertiary (KT) extinction]. One of the more controversial and documented hypotheses has been "The Great Chicxulub Debate" concerned with the significance of the Chicxulub Crater [Yucatán Peninsula]. Gerta Keller [Professor of Geosciences (Paleontology) at Princeton University] has been the principal player in this hypothesis. The following links are for those that can wade through all of the statements and documentation...it is most interesting. Gerta Keller is opposed to that common hypothesis and suggests that the Chicxulub Crater happened some 300,000 years earlier. The Chicxulub Crater is just one of many legitimate hypotheses attempting to explain why the dinosaurs slipped to a fossil status. Any thoughts? Feel free to mention alternative hypotheses.

"Doubts on Dinosaurs: Yucatán impact crater may have occurred before the dinosaurs went extinct"

Scientific American
According to conventional paleontological wisdom, an asteroid or comet 10 to 14 kilometers wide crashed into the present-day Yucatán Peninsula 65 million years ago and wiped out the dinosaurs. Most scientists currently consider the Chicxulub impact crater, perhaps about 145 kilometers wide, to be the smoking gun of this Cretaceous-Tertiary (KT) extinction.

Not so fast, says Princeton University micropaleontologist Gerta Keller. The collision that created the Chicxulub crater, she argues, happened before the KT extinction--300,000 years too soon, to be more precise. She first made the controversial assertion last year, and the dust has yet to settle.

Keller does not dispute that a meteorite could have helped trigger the demise of the dinosaurs. But she remains confident that Chicxulub is not the crater scientists should be looking at, based on sediments she has analyzed from various Chicxulub sites. She has several lines of evidence: one in particular relates to the layer of iridium, an extremely rare element known to be abundant in many meteorites, that exists at the KT boundary at sites around the world. In theory, only massive impacts can distribute the element globally.

A big collision can also produce another kind of layer, too, by melting and vaporizing silicate rocks, which then condense into sand-grain-size glass spheres known as microtektites. Depending on the mass of the colliding meteorite, these tiny glass spheres can be thrown hundreds to thousands of kilometers from the point of impact.

Keller discovered that the original Chicxulub microtektite layers lie up to 14 meters below the KT iridium layer at the northeastern Mexico site (the crater itself extends from the northwestern tip of the Yucatán Peninsula into the Gulf of Mexico). "To date, no one has found iridium associated with Chicxulub," Keller says.

Jan Smit, a paleontologist at Vrije University in the Netherlands, doubts Keller's claims, stating that her argument about KT iridium and Chicxulub borders on tautology: "If you uncouple all the iridium-enriched ejecta layers from the Chicxulub impact, then of course there is no iridium associated with Chicxulub." In any case, Smit contends, "How and where do you hide the iridium from a large impact such as Chicxulub?"

Keller hypothesizes that the object that made Chicxulub may have been "a dirty snowball" type that did not have any iridium. Some meteorites do not. Another possibility could be that measurements may not yet have been taken from the correct rock strata.

Researchers have also raised doubts about Keller's proposed 300,000-year age difference between Chicxulub and KT, which is based on sedimentation rates extrapolated from the distance between the microtektite layer and the KT boundary layer. Geoffrey Garrison, a paleontologist from the University of Washington, wonders why the material separating the two layers could not have been just sediment that was resuspended by the impact and that had simply settled back to the seafloor.

Keller insists that she has already ruled out resuspension. She claims that sediment settling after a high-energy event, such as an impact, tsunami or storm, produces identifiable layers. Heavier grains settle out first, followed by the finest-grained muds and clays. Such a pattern does not appear in the Chicxulub crater, Keller reports.

Keller plans to bolster her case with an upcoming paper that argues that meteorite impacts that leave Chicxulub-size craters and smaller cannot by themselves cause significant species extinctions. The amount of material ejected, she finds, is insufficient to trigger long- lasting climatic or geographic changes from fire or floods. Sudden mass extinctions might require the coincidence of major volcanism and a large impact event, "but so far no one has found the source crater," Keller says in her dismissal of Chicxulub. "The history of mass extinctions seems to indicate that a single short-term shock to the environment can be survived by nearly all species." Whether conventional wisdom survives Keller's own shock to paleontology remains to be seen.


The Great Chicxulub Debate I

The Great Chicxulub Debate II
Posted by Mercury at 3:49 PM