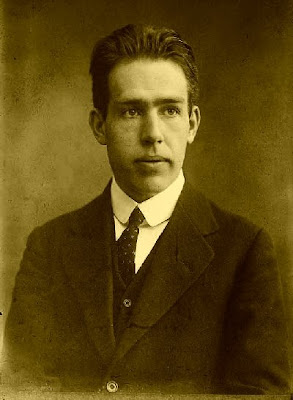 Niels Bohr
This will not be Bohring for it is revisionist physics in action especially when original material [the 12 volume Niels Bohr Collected Works] is made available online but the catch will be that it probably comes with a fee for reading or a fee for a subscription i.e., Elsevier.

physicsworld.com
Niels Bohr’s towering role in the history of physics can be difficult to appreciate. Robert P. Crease explains why.

In his book Niels Bohr's Times, the physicist Abraham Pais captures a paradox in his subject’s legacy by quoting three conflicting assessments. Pais cites Max Born, of the first generation of quantum physics, and Werner Heisenberg, of the second, as saying that Bohr had a greater influence on physics and physicists than any other scientist. Yet Pais also reports a distinguished younger colleague asking with puzzlement and scepticism "What did Bohr really do?".

We can sympathize with that puzzlement. In history books, Bohr’s chief contribution to physics is usually said to be "the Bohr atom" — his application in 1912–3 of the still-recent quantum hypothesis to overcome instabilities in Rutherford’s "solar-system" model of the atom, in which electrons travelled in fixed orbits around a positively charged nucleus. But this brilliant intuitive leap, in which Bohr assembled several puzzling features from insufficient data, was soon superseded by more sophisticated models.

Bohr is also remembered for his intense conversations with some of the founders of quantum mechanics. These include Erwin Schrödinger, whom Bohr browbeat into a (temporary) retraction of his ideas; Heisenberg, who broke down in tears under Bohr’s relentless questioning; and Einstein, whom Bohr with debated for years. Bohr is remembered, too, for "complementarity" — an ordinary-language way of saying that quantum phenomena behave, apparently inconsistently, as waves or particles depending on how the instruments that measure them are set up, and that we need both concepts to fully capture the phenomenon.

He has, though, been mocked for the supposed obscurity of his remarks on this subject and for extending the idea to psychology, anthropology, free will, love and justice. Bohr has also been wrongly blamed for mystical ideas incorrectly ascribed to the "Copenhagen interpretation" of quantum mechanics (a term Heisenberg coined), notably the role of the subjectivity of the observer and the collapse of the wave packet.

Now Bohr is back in focus. Publishing giant Elsevier is this month putting the massive 12-volume Niels Bohr Collected Works online for the first time and has also created a print index for the entire set, which contains Bohr's extensive correspondence and writings about various aspects of physics and society. Most of volume 10 and much of volumes 6 and 7, for instance, are about complementarity. The time is therefore ripe for re-evaluating Bohr and clarifying the "Bohr paradox": why he is both revered and underappreciated?

Bohr practised physics as if he were on a quest. The grail was to fully express the quantum world in a framework of ordinary language and classical concepts. "[I]n the end," as Michael Frayn has Bohr’s character say in the play Copenhagen, "we have to be able to explain it all to Margrethe" — his wife and amanuensis who serves as the onstage stand-in for the ordinary (i.e. classically thinking) person.

Many physicists, finding the quest irrelevant or impossible, were satisfied with partial explanations — and Heisenberg argued that the mathematics works: that’s enough! Bohr rejected such dodges, and rubbed physicists’ noses in what they did not understand or tried to hide. However, he did not have an answer himself — and he knew it — but had no reason to think one could not be found. His closest approximation was the doctrine of complementarity. While this provoked debate among physicists on the "meaning" of quantum mechanics, the doctrine — and discussion — soon all but vanished.

Why? The best explanation I have heard is advanced by the physicist John H Marburger, who is currently science advisor to US President George Bush. By 1930, Marburger points out, physicists had found a perfectly adequate way of representing classical concepts within the quantum framework using Hilbert (infinite-dimensional) space. Quantum systems, he says, "live" in Hilbert space, and the concepts of position and momentum, for instance, are associated with different sets of coordinate axes that do not line up with each other, thereby resulting in the situation captured in ordinary-language terms by complementarity.

"It's a clear, logical and consistent way of framing the complementarity issue," Marburger explained to me. "It clarifies how quantum phenomena are represented in alternative classical 'pictures', and it fits in beautifully with the rest of physics. The clarity of this scheme removes much of the mysticism surrounding complementarity. What happened was like a gestalt-switch, from a struggle to view microscopic nature from a classical point of view to an acceptance of the Hilbert-space picture, from which classical concepts emerged naturally. Bohr brokered that transition."

Thus while Bohr used the notion of complementarity to say that quantum phenomena are both particles and waves — somewhat confusingly, and in ordinary-language terms — the notion of Hilbert space provided an alternate and much more precise framework in which to say that they are neither. Yet the language is abstract, and the closest outsiders can come to grasping it is Bohr’s awkward and imperfect notion.

In the first generations of quantum theory, Bohr was revered for leading the quest to keep the field together within a single framework expressible in ordinary language and classical concepts. The Bohr paradox arises because the results of the quest were manifested not in citation indices linked with Bohr's name, but in an increased integrity of thought that pervaded the entire field, which has proved hard for subsequent generations of physicists — and even historians — to appreciate.

If Bohr's quest had a specific result, it was the idea of complementarity. But physicists soon found a more effective and satisfying way to represent quantum phenomena in a technical language using coordinate systems in Hilbert space. Scientists need to pursue possible and important paths even if they do not pan out. Bohr's greatness was to recognize the importance of this quest, and to relentlessly carry it out with insight and passion. If it did not succeed, and if in the end he would not be able to explain it all to Margrethe — for whom it would have to remain esoteric — that was nature’s doing and not Bohr’s failing. It should not diminish our appreciation of his achievement.