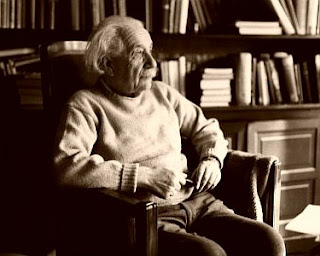 "It follows from the Special Theory of Relativity that mass and energy are proved of very different manifestations of the same thing. A somewhat unfamiliar conception for the average man. Furthermore, the equation E=mc² in which energy is quite equal to mass multiplied with the square of the velocity of light showed that very small amounts of mass may be converted into a very large amount of energy and vice-versa. The mass and energy were in fact equivalent. According to the formula mentioned above, this was demonstrated by Cockcroft and Walton in 1932 experiment."

On August 22 in 1930 Albert Einstein held a speech on the exhibition site at the radio tower in Berlin-Charlottenburg at the opening of the 7. Deutsche Funkausstellung und Phonoschau (7th German Radio and Audio Show) in Berlin. The speech which was broadcast via radio was held at stormy weather and near the trams rattling along in the open. Both these unfavourable circumstances and the technical imperfection of the back then sound recording are reflected in the sound quality which can be listened to here. Despite the shortness of the sound document Einstein’s simple way of lecturing can be recognized. It is pepped up with little jokes. His slightly south German dialect can be heard well, too. Einstein received vivid applause at the end of his speech.

The speech is in German with this English translation:


Ladies and Gentlemen who are present and who are not!

When you hear the radio think also about the fact how people have come to possess such a wonderful tool of communication. The origin of all technical achievements is the divine curiosity and the play instinct of the working and thinking researcher as well as the constructive fantasy of the technical inventor.
Think of Oersted who as the first person noticed the magnetic effect of electric currents, of Reis who as the first one made use of this effect to generate sound by using electromagnetism, of Bell who as the first person converted sound waves into variable electric currents with his microphone by using sensitive contacts. Think also of Maxwell who showed us the existence of electric waves by using a mathematical way, of Hertz who as the first person generated them with the help of a spark and thus proved them. Think especially of Liebens who invented an unprecedented measuring instrument for electric pulses, the electric valve tube. It was also an ideal and simple instrument to generate electric waves.

Think gratefully of the big number of unknown engineers who simplified the instruments of communication via radio and adapted them to mass production in such a fashion that they have become ready to be used by everybody nowadays.

And everybody should be ashamed who uses the wonders of science and engineering without thinking and having mentally realized not more of it than a cow realizes of the botany of the plants which it eats with pleasure.
Think also about the fact that it is the engineers who make true democracy possible. They facilitate not only the daily work of the people but also make the works of the finest thinkers and artists accessible to the public. The pleasure of these works had recently still been a privilege of the preferred classes. Thus the engineers wake the peoples from their sleepy bluntness.

The radio has to fulfil a special and unique function for international reconciliation. Up to now peoples got to know each other almost only with the help of the distorting mirror of their own daily press. Radio shows them to each other in their most vivid form and mainly from their amicable side. Thus it will contribute to end the feeling of bilateral strangeness which so easily turns to mistrust and hostility.

With this attitude look at the results of the creation which this exhibition offers the astonished senses of the visitors.


And this...
Rare color footage from Getty Images of Albert Einstein. 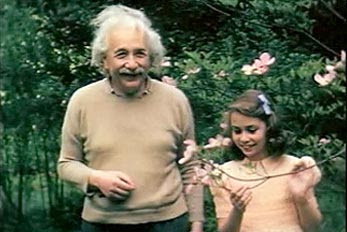 Rare color photograph still from the only known color movie film of Einstein.

This footage was discovered in the home movie library of Leo Mattersdorf, who was an accountant and personal friend of Einstein. The clip itself is from an annual event hosted by Einstein at his home in Princeton . It shows the great scientist in an informal setting, having fun and relaxing. 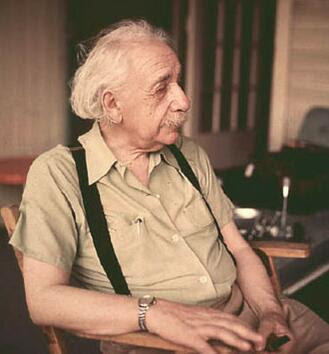 
The Einstein Theory of is a silent film released in 1923 by Fleischer Studios. In August 1922 Scientific American published an article explaining their position that a silent film would be unsuccessful in presenting relativity to the general public. They argued that only as part of a broader educational package including lecture and text would such a film be successful. Scientific American then went on to review frames from an unnamed German film reported to be financially successful. Six months later, in February 1923, the Fleischers released their relativity film, produced in collaboration with Garrett Serviss to accompany his book on the same topic. Two versions of the Fleischer film are reported to exist - a shorter two-reel (20 minute) edit intended for general theater audiences, and a longer five-reel version intended for educational use. There has been some speculation among scholars that the Fleischers lifted footage from the German predecessor for inclusion into their film. Presented here are images from the Fleischer film and German film. If actual footage was not recycled into The Einstein Theory of Relativity, these images and text from the Scientific American article suggest that original visual elements from the German film were. This film, like much of the Fleischer's work, has fallen into the public domain. Unlike Fleischer Studio's Superman or Betty Boop cartoons, The Einstein Theory of Relativity has very few existing prints and is available in 16mm from only a few specialized film preservation organizations.--Wikipedia
Posted by Mercury at 8:08 AM

This is so wonderful. Thank you.