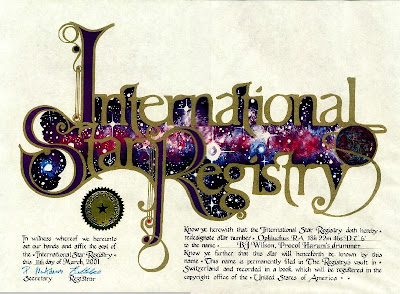 There is nothing illegal here just an ethical issue. You can with great intentions name a star of a deceased individual, your pet, or whatever and as Wikipedia says: "Once the star is named..." the seller publishes "...its telescopic coordinates in a book called "Your Place in the Cosmos."" and "...is "registered in book form at the U.S. Copyright Office"...." The ethical issue is that the star name is not recognized as an official astronomical designation..."The International Astronomical Union (IAU)...has the internationally recognized authority to name and designate newly discovered stars, planets, asteroids, comets, and other heavenly bodies. The IAU's nomenclature...is the one used by professional and amateur astronomers all over the world. It is not for sale." No where is it stated that the star name is official. It's a gift of the heart and mind but just be aware of authenticity.

Wired
Winona Ryder got one for Johnny Depp. Nicole Kidman got one and named it "Forever Tom." Princess Diana has two, purchased for her after her death. And at least one widow of a fireman lost in the World Trade Center attack wanted to buy one in memory of her late husband.

What these people have is a 12-by-16-inch certificate from the Illinois company International Star Registry (ISR), claiming that a star had been named for them or their loved one.

They have a booklet with charts of the constellations, along with a large detailed star chart with "their" star circled in red. They also have a gap in their bank account where $48 used to be. What they don't have is any confirmation their star's new name is recognized and will be used by anyone outside International Star Registry.

Founded in 1979, ISR has sold over 1 million of their full-color "Name A Star" parchment certificates. Figuring there are between 400 billion and 1 trillion stars in this galaxy alone, selling names for them at nearly $50 each sounds like a license to print money.

The International Astronomical Union is the only scientific body authorized to name astronomical bodies.

In other words, typing "Forever Tom" into the Hipparcos star data catalog will get you nothing but a 404.

The International Star Registry is not in the business of officially assigning star names; it is in the business of finding people willing to part with their money for a piece of paper that in a scientific sense means precisely nothing.

"We produce a good product, a fun product. We may have planted a seed with people, educated them even slightly about astronomy, about the stars," said Rocky Mosele, vice president of marketing and advertising for ISR. "For people to say, 'Well, it's not official' -- I think people are OK that it's not official. I'm sure of it. I know because customers call again and again and again."

Yet a significant number of people believe that the naming of a star is an official activity. Is ISR's star-naming business therefore a scam? No, not legally. The company promises to send you a piece of parchment, a booklet and a star map -- and it delivers. It also promises to copyright your star's new name and location in a book -- and it does.

Earlier ISR advertisements promised to store a star's name in a vault in Geneva, Switzerland, and there's no reason to believe this was not done. The company very carefully makes no claim that the star's new name will be recognized by professional astronomers.

"We've been given a clean bill of health by the attorney general of Illinois," Mosele said. "They find no problem with what we do; we're not trying to mislead people."

ISR doesn't even use the word "official" anywhere on its main Web page.

Yet this tacit acknowledgement hasn't stopped ISR from throwing its weight around. In 2000, they threatened to sue Ohio Wesleyan University for hosting a student's Web page criticizing the company's star-naming practices. Rather than face a lawsuit, the university removed the website. At roughly the same time, ISR threatened suit against a Florida planetarium for remarks against ISR made by one of its employees.

"I was actually hoping they'd sue me," said Laurent Pellerin, the employee in question. "But ISR went after (my employer, knowing) they couldn't afford even a successful lawsuit."

International Star Registry actually brought suit in 1999 against another star-naming company, claiming trademark infringement. (Oddly enough, this case was significant, as it determined that doing business over the Internet with inhabitants of a state was the equivalent of doing business in that state.)

What bothers most people in the astronomy and planetarium communities is that too many people buy these stars under the assumption that their star's name will be acknowledged worldwide by the astronomical community. "I would be perfectly happy if ISR said up front that the star name you're purchasing is not scientifically recognized," Pellerin said. "They do that on their Canadian website. Why can't they just say it here?"

"Why, after the astronomy community has been so nasty to us, should I do them any favors?" retorts ISR's Mosele. "They're requesting something of me. Why should I do it based on their request after they've been so nasty? I don't think our customers are confused."

To those who would like to honor a living or departed loved one with an astronomical gift, Marc Taylor of the Andrus Planetarium in Westchester County, New York, offers an alternative. "If you want to buy something for a child, why not get them a beginner's astronomy book, or even a pair of binoculars?" he said. "In memory of someone who has died, donating astronomy equipment -- even a magazine subscription -- to a school is a great way to keep their memory alive, because you open up the universe to others."
Posted by Mercury at 7:32 AM