A familiar story of witnessing something and having the event diminish or vanish when a corroborating witness is summoned...like calling the police complaining about a noisy neighbor and all is quiet when they finally arrive.

Thirty three year-old Richard Carringto, widely acknowledged to be one of England's foremost solar astronomer, was in his well-appointed private observatory. Just as usual on every sunny day, his telescope was projecting an 11-inch-wide image of the sun on a screen, and Carrington skillfully drew the sunspots he saw.

On that morning, he was capturing the likeness of an enormous group of sunspots. Suddenly, before his eyes, two brilliant beads of blinding white light appeared over the sunspots, intensified rapidly, and became kidney-shaped. Realizing that he was witnessing something unprecedented and "being somewhat flurried by the surprise," Carrington later wrote, "I hastily ran to call someone to witness the exhibition with me. On returning within 60 seconds, I was mortified to find that it was already much changed and enfeebled." He and his witness watched the white spots contract to mere pinpoints and disappear.

Just before dawn the next day, skies all over planet Earth erupted in red, green, and purple auroras so brilliant that newspapers could be read as easily as in daylight. Indeed, stunning auroras pulsated even at near tropical latitudes over Cuba, the Bahamas, Jamaica, El Salvador, and Hawaii. Even more disconcerting, telegraph systems worldwide went haywire. Spark discharges shocked telegraph operators and set the telegraph paper on fire. Even when telegraphers disconnected the batteries powering the lines, aurora-induced electric currents in the wires still allowed messages to be transmitted. 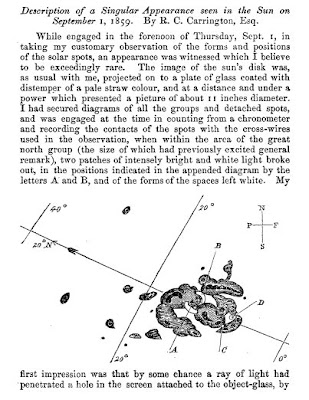 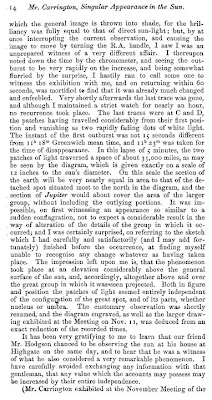 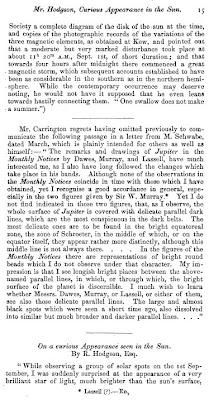 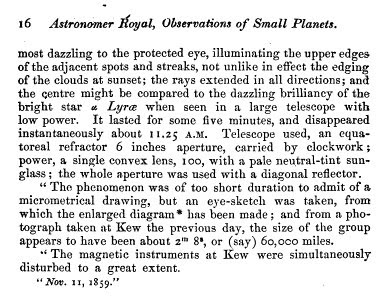 Forecasting the Impact of an 1859-calibre Superstorm on Satellite Resources

May be read online.

Space Radiation Hazards and the Vision for Space Exploration: Report of a Workshop
Posted by Mercury at 10:22 AM