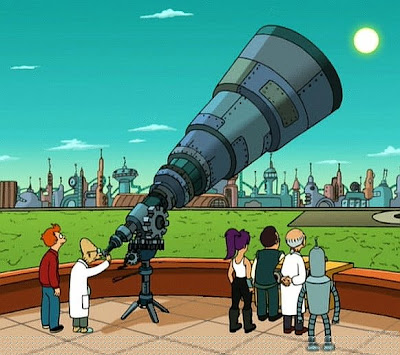 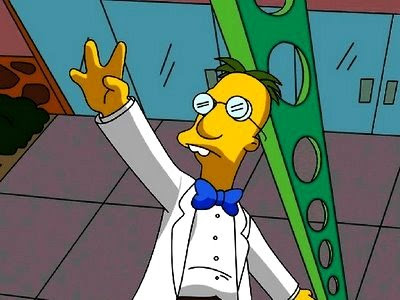 Cartoons have been around since Winsor McCay's Gertie the Dinosaur [1914].

Since then, the laws of physics have been violated and poor, stereotypical representations of scientists portrayed [Futurama's Professor Hubert J. Farnsworth, The Simpsons' Professor Frink]. Is there a reason for this? Is it a conscious parody? Is it a misunderstanding of science and scientists. Is it just good fun?

"Science and The Simpsons"

Physics World
The Simpsons is one of the cleverest shows on TV. But what, asks Robert P Crease, does a cartoon that parodies nuclear safety and space exploration have to say about science?
Until recently I was surely the only person who hadn't seen The Simpsons, the cartoon series about a dysfunctional family that is the longest-running animated series of all time and a classic of American popular culture. Then I heard that Stephen Hawking had made a cameo appearance in one episode, declared it "one of the cleverest shows on television" and said "it always has a moral".

That endorsement by the world's best-recognized living scientist intrigued me. What could Hawking have found in a show that is said to parody science, nuclear safety and intelligence in general? Had the brilliant physicist talked glibly to reporters, or was he just out of his element in the intricacies of popular culture? I borrowed some tapes to find out.
Succeeding despite idiocy I saw the "clever", certainly. The most visible landmark in Springfield, the setting for the cartoon, is a nuclear-power plant. The plant is disaster-prone - regularly plagued by improbable events, dumb luck and human bungling. Homer Simpson, the safety inspector, pushes the wrong buttons, sleeps through alarms and almost causes core meltdowns. So why hasn't the Springfield reactor Chernobyl-ed long ago?

The reason is that the plant is also regularly protected by improbable events, dumb luck and human bungling. In one episode, seconds before a core meltdown, with alarm klaxons blaring, Homer is helpless, having completely forgotten his training. He plays "eenie, meenie, miney, moe" with the controls, covers his eyes and pushes a button. It's the right one. Plant and town are saved, and "pulling a Homer" becomes a new expression meaning "to succeed despite idiocy".

Any serious application of intelligence gets like treatment. In "They saved Lisa's brain", the episode in which Hawking features, a council of high-IQ MENSA members takes over Springfield's governance, determined to use "the power of good ideas to change things for the better". The effort quickly collapses. Enter Hawking. Introduced as "the world's smartest man", his character is pompous, spouts clichés, steals an idea from Homer (that the universe is toroidal), and mishandles his wheelchair.

In another episode, the zoologist Stephen Jay Gould is asked to debunk a purported angel fossil. Homer's religious next-door neighbour is outraged. "Science is like a blabbermouth who ruins a movie by telling how it ends," he says. "I say there are some things we don't want to know! Important things!" And the residents rush off to demolish the town's scientific institutions. The angel, however, turns out to be a hoax, planted in a scheme to advertise the opening of a new shopping mall.

Science in The Simpsons is not alone in being singled out for mockery but is instead woven into the satiric fabric as just another source of improbable events, dumb luck and human bungling. Science permeates the world of the Springfield residents, but their decisions are shaped not by rationality but by habit, ignorance and laziness. Minor advances in science can have monumental if momentary impacts, for example when Homer takes some Rogaine anti-baldness treatment and immediately becomes an executive of the plant because he now has hair.

If Springfield's residents can relate to science at all, it is at the level of relating to a cartoon character or baseball game. Once, when pressed to name a scientist, Homer replies: "Batman". Another time, Homer's son Bart, voicing the maximum enthusiasm he can give anything, shouts out, "Hurrah for science. Woo!"

The very idea of a "moral" - an authoritative message - seems antithetical to the show's lighthearted, funny spirit and the way it punctures all pretence to authority. For this reason my colleagues would say it has a post-modern sensibility, but I wouldn't go there myself, because that is precisely to adopt the kind of wannabe authoritative stance that the show parodies.

What The Simpsons has to say about science is encapsulated in the "Bart's comet" episode. As punishment for mocking his school's science week, Bart has to help in an exacting and laborious comet search. When the school principal is momentarily distracted, Bart malevolently spins the telescope like a roulette wheel, spots a comet and calls the observatory, which names it the Bart Simpson Comet. However, the comet is heading directly for Springfield. Scientists build a rocket to intercept the comet and blow it up.

As you've guessed, the rocket misses and instead blows up the only bridge out of town. Most of Springfield's inhabitants squeeze into a bomb shelter, but leave at the last minute so that they can all die together. This, too, fails because the comet disintegrates in the atmospheric pollution hanging over the town. "I can't believe that extra-thick layer of pollution that I've actually picketed against is what burned up the comet," says Bart's sister Lisa. The one fragment of the comet to make it through hits the bomb shelter where they had huddled for safety moments before. Someone then says: "Let's go burn down the observatory so this will never happen again!" A newscaster describes the ethos of the inhabitants: "Never give up and never think things out."

Could Hawking really have found an acceptable credo here? Quite possibly. Life - and maybe Hawking was thinking "science" - offers us a constant sequence of false alternatives. When we grab one choice, and find that it inevitably founders, new possibilities emerge and we are spared the worst. Chance is not the awful terrorism dreaded by the rationalists presented by Einstein's dice-playing God. Improbable events, dumb luck and human bungling sabotage us but they also help us to muddle through, however comic this process may look to outsiders. The things in heaven and Earth work far more perversely than dreamed of by our science and philosophy. We pull Homers and go on. Life (and science) is resilient.

Could this be what the wise Hawking saw all along?


Robert P Crease is in the Department of Philosophy, State University of New York at Stony Brook, and historian at the Brookhaven National Laboratory, US.


Irreverence for physics in cartoons:

Any body suspended in space will remain in space until made aware of its situation. Daffy Duck steps off a cliff, expecting further pastureland. He loiters in midair, soliloquizing flippantly, until he chances to look down. At this point, the familiar principle of 32 feet per second per second takes over.

Any body in motion will tend to remain in motion until solid matter intervenes suddenly. Whether shot from a cannon or in hot pursuit on foot, cartoon characters are so absolute in their momentum that only a telephone pole or an outsize boulder retards their forward motion absolutely. Sir Isaac Newton called this sudden termination of motion the stooge's surcease.

Any body passing through solid matter will leave a perforation conforming to its perimeter. Also called the silhouette of passage, this phenomenon is the specialty of victims of directed-pressure explosions and of reckless cowards who are so eager to escape that they exit directly through the wall of a house, leaving a cookie-cutout-perfect hole. The threat of skunks or matrimony often catalyzes this reaction.

All principles of gravity are negated by fear. Psychic forces are sufficient in most bodies for a shock to propel them directly away from the earth's surface. A spooky noise or an adversary's signature sound will induce motion upward, usually to the cradle of a chandelier, a treetop, or the crest of a flagpole. The feet of a character who is running or the wheels of a speeding auto need never touch the ground, especially when in flight.

As speed increases, objects can be in several places at once. This is particularly true of tooth-and-claw fights, in which a character's head may be glimpsed emerging from the cloud of altercation at several places simultaneously. This effect is common as well among bodies that are spinning or being throttled. A `wacky' character has the option of self-replication only at manic high speeds and may ricochet off walls to achieve the velocity required.

Certain bodies can pass through solid walls painted to resemble tunnel entrances; others cannot. This trompe l'oeil inconsistency has baffled generations, but at least it is known that whoever paints an entrance on a wall's surface to trick an opponent will be unable to pursue him into this theoretical space. The painter is flattened against the wall when he attempts to follow into the painting. This is ultimately a problem of art, not of science.

Any violent rearrangement of feline matter is impermanent. Cartoon cats possess even more deaths than the traditional nine lives might comfortably afford. They can be decimated, spliced, splayed, accordion-pleated, spindled, or disassembled, but they cannot be destroyed. After a few moments of blinking self pity, they reinflate, elongate, snap back, or solidify. Corollary: A cat will assume the shape of its container.

Everything falls faster than an anvil.

For every vengeance there is an equal and opposite revengeance. This is the one law of animated cartoon motion that also applies to the physical world at large. For that reason, we need the relief of watching it happen to a duck instead.

The laws of object permanence are nullified for "cool" characters. Characters who are intended to be "cool" can make previously nonexistent objects appear from behind their backs at will. For instance, the Road Runner can materialize signs to express himself without speaking.

Gravity is transmitted by slow-moving waves of large wavelengths. Their operation can be witnessed by observing the behavior of a canine suspended over a large vertical drop. Its feet will begin to fall first, causing its legs to stretch. As the wave reaches its torso, that part will begin to fall, causing the neck to stretch. As the head begins to fall, tension is released and the canine will resume its regular proportions until such time as it strikes the ground.

Dynamite is spontaneously generated in "C-spaces" (spaces in which cartoon laws hold). The process is analogous to steady-state theories of the universe which postulated that the tensions involved in maintaining a space would cause the creation of hydrogen from nothing. Dynamite quanta are quite large (stick sized) and unstable (lit). Such quanta are attracted to psychic forces generated by feelings of distress in "cool" characters (see Amendment B, which may be a special case of this law), who are able to use said quanta to their advantage. One may imagine C-spaces where all matter and energy result from primal masses of dynamite exploding. A big bang indeed.
Posted by Mercury at 7:53 AM