“You have seen the puzzle of the Paper Ring?” Mein Herr said, addressing the Earl.

“Where you take a slip of paper, and join its ends together, first twisting one, so as to join the upper corner of one end to the lower corner of the other?”

“I saw one made, only yesterday,” the Earl replied.

“Muriel, my child, were you not making one, to amuse the children you had to tea?” “Yes, I know that Puzzle,” said Lady Muriel.

“The Ring has only one surface, and only one edge, It’s very mysterious!”

“The bag is just like that, isn’t it?” I suggested.

“Is not the outer surface of one side of it continuous with the inner surface of the other side?” “So it is!” she exclaimed.

“Only it isn’t a bag, just yet. How shall we fill up this opening, Mein Herr?”

“Thus!” said the old man impressively, taking the bag from her, and rising to his feet in the excitement of the explanation.

“So you can!” Lady Muriel murmured thoughtfully, leaning her head on her hand, and earnestly watching the old man.

“And that proves it to be only one opening!”

She looked so strangely like a child, puzzling over a difficult lesson, and Mein Herr had become, for the moment, so strangely like the old Professor, that I felt utterly bewildered: the “eerie” feeling was on me in its full force, and I felt almost impelled to say “Do you understand it, Sylvie?”

However I checked myself by a great effort, and let the dream (if indeed it was a dream) go on to its end.

“Now, this third handkerchief”, Mein Herr proceeded “has also four edges, which you can trace continuously round and round: all you need do is to join its four edges to the four edges of the opening. The Purse is then complete, and its outer surface--”

“Its outer surface will be continuous with its inner surface! But it will take time. I’ll sew it up after tea.” She laid aside the bag, and resumed her cup of tea. “But why do you call it Fortunatus’s Purse, Mein Herr?”

The dear old man beamed upon her, with a jolly smile, looking more exactly like the Professor than ever.

“Don’t you see, my child--I should say Miladi? Whatever is inside that Purse, is outside it; and whatever is outside it, is inside it. So you have all the wealth of the world in that leetle Purse!” The above is the only literary reference I know describing one of two famous and curious topological oddities...the "Klein Bottle". The other item is the "Möbius Strip". 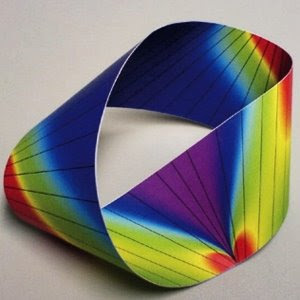 Sylvie and Bruno Concluded
Posted by Mercury at 9:40 AM