Science debates for the 2008 presidential candidates 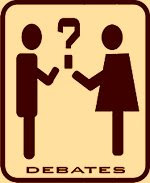 One might as well scream in space for no one will hear anything and this proposal aimed at the 2008 presidential candidates will quickly drop out of sight. The proposal is that there should be a national science debate. So far there has been zero response from the candidates despite that a recent Harris Interactive poll indicated that "...85% of US adults think agree that the presidential candidates should participate in a debate on science in the run up to the November election." You will never convince the candidates that it is a good idea. Why not? I think it is a matter of priorities facing the United States: A possible recession, inflation in services and goods [fuel and food], unemployment, a collapsed real estate market, the credit crunch, and the Near East conflict. Holding a science forum would concentrate on some sensitive issues that can be politically hot: Diverse fuel, exploitation of domestic fuel supplies, stem cell research, science education [domestic and allocation of foreign students], overall science budget, issues with NASA's budget, feasibility of space exploration by man, CO2 emissions, etc. The candidates probably don't even have a position or are terribly ignorant of them. 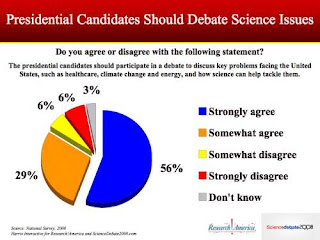 I'm sorry to say that, having taken a day's leave on Monday, this snippet of news (above) about ScienceDebate 2008 escaped my attention. According to a poll conducted by Harris Interactive on behalf of ScienceDebate 2008 and Research!America, 85% of US adults think agree that the presidential candidates should participate in a debate on science in the run up to the November election.

(For those of you who have missed the protests of the 37,000 signatories of ScienceDebate 2008, see my last news story on their progress.)

"This topic has been virtually ignored by the candidates, but this poll shows that Americans of all walks know how important science and technology are to our health and way of life. We've heard a lot about lapel pins and preachers. But tackling the big science challenges is critical to our children's future — to the future of the country and the future of the planet. Americans want to know that candidates take these issues seriously, and the candidates have a responsibility to let voters know what they think."

The poll also shows that:

You can read more here.