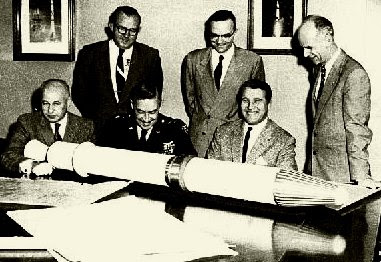 May 25th, 2008
Dr. Ernst Stuhlinger, one of the last surviving members of the 126 German rocket scientists brought over to the United States after world war II has passed away quietly in Huntsville Alabama. Dr. Stuhlinger was 94 years old.

Dr. Ernst Stuhlinger (born December 19, 1913) was an American atomic, electrical and rocket scientist born in Niederrimbach, Germany. He earned his Ph.D. in physics at age 23, and in 1939 went to work for the German Atomic Energy Program. In 1943, he joined Dr. Wernher von Braun's team at the German village of Peenemuende, where he worked in the field of guidance systems. He was one of 126 scientists who immigrated to the United States with Dr. von Braun after World War II as part of Operation Paperclip. On April 14, 1955, he became a naturalized United States citizen.

In the 1950s Stuhlinger worked at the Redstone Arsenal, where he developed designs for solar-powered spacecraft. The most popular of those designs relied on ion stream vapor emitted by either caesium or rubidium atoms to be accelerated by negatively charged electrodes which would push the ion stream through a propulsion channel. The mechanism would be powered by the one kilowatt of radiant energy that falls on each square meter of space from the sun. He referred to it as a "sunship."

Stuhlinger was director of the space science lab at NASA's Marshall Space Flight Center in Huntsville, Alabama, from 1960 to 1968, and then its associate director for science from 1968 to 1975, when he retired and became an adjunct professor and senior research scientist at the University of Alabama in Huntsville.

I met Dr. Stuhlinger in 1988 in Huntsville when he was working in his retirement at Teledyne Brown Engineering. At the time he was working on a drop tower which is a tower with a vacuum in the middle where a few seconds of microgravity can be generated as the experiment falls from the top to the bottom.

Dr. Stuhlinger's greatest accomplishment was to be one of the key inventors of ion propulsion, which is an ultra efficient means of generating thrust in space to move spacecraft around. The first mission to use this technology was the Space Electric Rocket Test (SERT) in the early 1970's. NASA's Deep Space 1 spacecraft, launched in 1998 depended on ion propulsion for its missions. Many Russian and American missions have used electric thrusters in the past twenty years to conserve fuel and extend the life of GEO spacecraft.

Dr. Stuhlinger designed the first manned ion propulsion system for sending humans to Mars as far back as 1958 (a scanned image is shown here) and by the 1970's he and Von Braun were convinced that ion propulsion would open up the solar system for exploration. This dream is very slowly being realized.

My own interest in ion propulsion was stimulated by Dr. Stuhlinger and today I tip my hat to him and those of his generation that helped to build the rockets that put mankind on the Moon.

The New York Times
Ernst Stuhlinger, one of the most prominent of the Germans who brought their skills in rocket science to the United States after World War II and a close associate of Wernher von Braun, died Sunday at his home in Huntsville, Ala. He was 94.

He died after being hospitalized several times in recent months, according to the U.S. Space and Rocket Center, a space museum and archive in Huntsville.

As one of the 118 engineers and scientists of the German V-2 missile program who surrendered to Americans toward the end of the war, Dr. Stuhlinger played the quiet, behind-the-scenes scientist to the more charismatic Dr. von Braun. He was director of science at the NASA Marshall Space Flight Center in Huntsville in the early decades of the space age.

The Marshall center, established around the nucleus of the von Braun team, led the development of several generations of rockets, culminating in the most powerful of all, the Saturn 5’s that propelled astronauts to the Moon in the Apollo program. Dr. Stuhlinger’s expertise was in the guidance and navigation instruments for space flight.

In fact, friends and former colleagues recall that his ingenuity was critical to the first successful American space launching, almost four months after the Soviet Union surprised the world with Sputnik 1. In the frenzy to catch up, an Army team including the German-born engineers and the Jet Propulsion Laboratory in California was ordered to get the Explorer 1 satellite up, double-time.

The rocket was a combination of V-2 technology and American upper stages. The timing of the second-stage firing had to be exact if the satellite was to achieve orbit. There was no time for elaborate designs and tests. So Dr. Stuhlinger retired to his home garage and, in a few hours, emerged with a clever timing device made of ordinary wires, screws and nuts.

On the night of Jan. 31, 1958, tracking the rocket’s ascent from a control console at Cape Canaveral, Fla., Dr. Stuhlinger pressed a button at just the right moment to signal the timing device to trigger the second-stage firing, not a second too soon or too late. He became known as "the man with the golden finger."

Last year, in an interview with The New York Times for the 50th anniversary of Sputnik, Dr. Stuhlinger said he had been excited but not surprised by the news of its launching.

"And then I immediately felt a kind of thankfulness to the Russian colleagues," he said, "because it was a wonderful wake-up call for us Americans."

Like most of the von Braun team, Dr. Stuhlinger had become a naturalized American, in 1955.

Frederick I. Ordway III, a historian of the German participation in the American space program, said nine members of the original team were still living in the United States, and possibly two others in Germany. In Operation Paperclip, the roundup of V-2 engineers from Peenemünde, most of them were resettled at Fort Bliss, Tex., and in 1950 were moved to the Army's Redstone Arsenal in Huntsville.

Mr. Ordway and Dr. Stuhlinger, who retired from the Marshall center in 1975, collaborated on a biography, Wernher von Braun: Crusader for Space, published in 1993. Dr. von Braun died in 1977.

In the book, Dr. Stuhlinger defended Dr. von Braun against contentions that he had been responsible for the mistreatment of the prisoners forced to work at the factory to make the V-2 missiles. Michael J. Neufeld writes in his biography, Von Braun: Dreamer of Space, Engineer of War, that this and similar defenses were based on "uncorroborated, second-hand anecdotes" and were "highly dubious."

The Associated Press reported that in a 1995 article for The Huntsville Times, Dr. Stuhlinger called the Nazi era "extremely deplorable" and said he and other German rocket engineers were working with an eye toward space flight, not weapons, at the end of the war.

Survivors include his wife, Irmgard Lotze Stuhlinger of Huntsville; two sons, Tillman, of Tucson, and Christoph, of Monticello, Ark.; and a daughter, Susanne Schmidt of Heidenheim, Germany.

Ernst Stuhlinger was born on Dec. 19, 1913, in Niederrimbach, Germany, and was educated at the University of Tübingen, where he earned a doctorate in physics. His postgraduate studies in Berlin were in nuclear physics and cosmic rays. He showed an early talent for building instruments for experiments.

But in World War II, he was sent to the Russian front as a common infantry soldier, was wounded at the Battle of Moscow and was one of the few in his unit to survive the Battle of Stalingrad. In 1943, he was assigned to scientific work on the V-2 development. He was in charge of evaluating data acquired in test flights.

At Huntsville, Mr. Ordway said, the dominant work was in engineering, but Dr. Stuhlinger was "more interested in what the launch vehicles would deliver, and he was the Mr. Science on the team."