Xenophon's "The Memorable Things of Socrates" 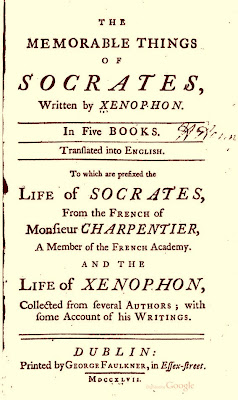 1747 edition of Sir Edward Bysshe's translation of Xenophon's The Memorable Things of Socrates.
A difficult read but if you wish to, check the flip book .Or, a readable translation from Project Gutenberg .Xenophon [Wikipedia]Here is the introduction to the Project Gutenberg offering...This translation of Xenophon’s “Memorabilia of Socrates” was first published in 1712, and is here printed from the revised edition of 1722. Its author was Edward Bysshe, who had produced in 1702 “The Art of English Poetry,” a well-known work that was near its fifth edition when its author published his translation of the “Memorabilia.” This was a translation that remained in good repute. There was another edition of it in 1758. Bysshe translated the title of the book into “The Memorable Things of Socrates.” I have changed “Things” into “Thoughts,” for whether they be sayings or doings, the words and deeds of a wise man are alike expressions of his thought.Xenophon is said to have been, when young, a pupil of Socrates. Two authorities have recorded that in the flight from the battle of Delium in the year b.c. 424, when Xenophon fell from his horse, Socrates picked him up and carried him on his back for a considerable distance. p. 6The time of Xenophon’s death is not known, but he was alive sixty-seven years after the battle of Delium.When Cyrus the Younger was preparing war against his brother Artaxerxes Mnemon, King of Persia, Xenophon went with him. After the death of Cyrus on the plains of Cunaxa, the barbarian auxiliaries fled, and the Greeks were left to return as they could from the far region between the Tigris and Euphrates. Xenophon had to take part in the conduct of the retreat, and tells the story of it in his “Anabasis,” a history of the expedition of the younger Cyrus and of the retreat of the Greeks. His return into Greece was in the year of the death of Socrates, b.c. 399, but his association was now with the Spartans, with whom he fought, b.c. 394, at Coroneia. Afterwards he settled, and lived for about twenty years, at Scillus in Eleia with his wife and children. At Scillus he wrote probably his “Anabasis” and some other of his books. At last he was driven out by the Eleans. In the battle of Mantineia the Spartans and Athenians fought as allies, and Xenophon’s two sons were in the battle; he had sent them to Athens as fellow-combatants from Sparta. His banishment from Athens was repealed p. 7by change of times, but it does not appear that he returned to Athens. He is said to have lived, and perhaps died, at Corinth, after he had been driven from his home at Scillus.Xenophon was a philosophic man of action. He could make his value felt in a council of war, take part in battle—one of his books is on the duties of a commander of cavalry—and show himself good sportsman in the hunting-field. He wrote a book upon the horse; a treatise also upon dogs and hunting. He believed in God, thought earnestly about social and political duties, and preferred Spartan institutions to those of Athens. He wrote a life of his friend Agesilaus II., King of Sparta. He found exercise for his energetic mind in writing many books. In writing he was clear and to the point; his practical mind made his work interesting. His “Anabasis” is a true story as delightful as a fiction; his “Cyropædia” is a fiction full of truths. He wrote “Hellenica,” that carried on the history of Greece from the point at which Thucydides closed his history until the battle of Mantineia. He wrote a dialogue between Hiero and Simonides upon the position of a king, and dealt with the administration of the little realm of a man’s household in his “Œconomicus,” a dialogue p. 8between Socrates and Critobulus, which includes the praise of agriculture. He wrote also, like Plato, a symposium, in which philosophers over their wine reason of love and friendship, and he paints the character of Socrates.But his best memorial of his old guide, philosopher, and friend is this work, in which Xenophon brought together in simple and direct form the views of life that had been made clear to himself by the teaching of Socrates. Xenophon is throughout opposing a plain tale to the false accusations against Socrates. He does not idealise, but he feels strongly, and he shows clearly the worth of the wisdom that touches at every point the actual conduct of the lives of men.
Posted by Mercury at 5:46 AM

Email ThisBlogThis!Share to TwitterShare to FacebookShare to Pinterest
Labels: "The Memorable Things of Socrates", Xenophon