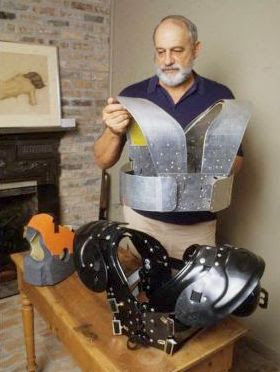 Byron DonzisMarch 5th, 1932 to Janiary 4th, 2012"Byron Donzis dies at 79; wide-ranging inventor"Byron Donzis made and lost fortunes while inventing such products as a flak jacket used by football players, inflatable running shoes and an X-ray machine to detect leaks in oil pipes.by Elaine WooJanuary 13th, 2012Los Angeles Times
In 1978, Byron Donzis walked into a Houston hospital looking for Dan Pastorini, the Houston Oilers' prized quarterback who was laid up with three broken ribs from a recent game. Donzis was wearing a trench coat and carrying a large bag. He was accompanied by an associate wielding a baseball bat.They sweet-talked their way past the nurses and into Pastorini's private room. The quarterback thought the two strange men must have lost money on the game and had come for revenge.Instead, Donzis instructed his friend to smack him across his rib cage as hard as he could with the bat. His buddy hit him four or five times but Donzis didn't flinch. When he pulled back his coat to reveal a garment that looked like a life jacket, Pastorini was agog."I said, 'I'd like to have one of those,'" Pastorini recalled telling Donzis. A few days later, the National Football League star donned Donzis' "flak jacket" in a big game and led his team to the playoffs.The flak jacket became standard gear in the NFL and the greatest success in Donzis' prolific and sundry career as an inventor-entrepreneur.Donzis, 79, who died Jan. 4 in Landrum, S.C., after a stroke, turned his ideas into useful products in fields as diverse as sports equipment, cosmetics, floristry and medicine. "He just wanted to know how things worked and what he could do to make things better," said his wife, Martha Gibson Donzis.His name appears on more than 35 patents, according to the U.S. Patent and Trademark Office. His inventions include a prefabricated tennis court, inflatable running shoes, stadium seats with solar panels and an X-ray machine for detecting leaky oil pipelines.Like many inventors, he had more ideas than successes and lost a number of fortunes."It's almost a curse," Sue Shaper, a Houston intellectual property attorney who represented Donzis for many years, said Thursday about the personality of inventors. "They see so many things and they can't pursue them all. Byron was a paradigmatic inventor in that sense."Before the flak jacket, Donzis developed running shoes with air chambers inflated by a built-in pump and acquired a patent on the system in 1972. Two decades later he successfully sued sports shoe maker Reebok for infringing on his patent when it marketed its "Pump" sneaker.Donzis also discovered the wrinkle-reducing capability of a chemical compound called beta-glucan, which he marketed to leading cosmetics companies, including Estee Lauder and Mary Kay. Licensed under the name Nayad, it won favorable reviews: Vogue magazine described it as "a superstar natural ingredient of the '90s."He once dismissed his inventions for lacking "any social relevance whatever," and said his real motivation was finding a cure for cancer. Although that goal eluded him, he was an early and important benefactor of the Sunshine Kids Foundation, a Houston-based nonprofit that supports children with cancer.Donzis was married twice but had no children.Born in San Antonio on March 5, 1932, Donzis graduated from high school in 1949 and dropped out of Southern Methodist University after one semester. After serving in the Army, he found work on a pipeline."In those days, no one was paid until the project was finished," Donzis told the San Antonio Express-News in 1999, and he needed a paycheck. Desperation, often the mother of invention, led Donzis to his first Thomas Edison moment. To speed up construction, he invented an X-ray system that quickly found leaks and flaws in the pipeline. He secured the patent in 1963.The tennis boom in the 1970s led to his next major inspiration: a tennis court made of wood and foam that could be built far more quickly than a traditional court. It seemed like a brilliant idea until the cold temperatures of winter made the foam shrink. Lawsuits from customers bankrupted him, but he rebounded as a carpenter and made good money building backyard decks.In the late 1970s, he spent some time at an Army laboratory in Massachusetts. The Army was looking for ways to protect pilots from blunt-force impact. Donzis' solution was a super-lightweight vest that inflated and deflated instantly, like a car air bag.After leaving the Army lab, he moved to Houston and was struggling to gain attention for his protective jacket when he heard about Pastorini's injury. Pastorini recalled that the prototype was fabricated from a Navy SEAL life jacket, with an outer layer of Kevlar. "It was a little bit rustic," he said.Donzis had no regrets about his unorthodox demonstration in the quarterback's hospital room. "People will consider you off the wall. If that bothers you don't be an innovator," he told the Dallas Morning News in 1994. "That's part of the badge you wear."The jacket caught on with other players and soon the NFL gave Donzis a grant to produce more of them, which he later made with foam. He went on to make other protective items, including thigh and neck pads, shoulder harnesses, helmets and knee guards. He made a flak jacket for James Garner after the actor fell off a mechanical bull during a movie shoot and broke several ribs.Donzis once said that the only gear he wouldn't make was a cup protector, quipping that he would never submit that part of his anatomy to the bat test.
Posted by Mercury at 4:58 AM