Necessary force and the "castle doctrine" 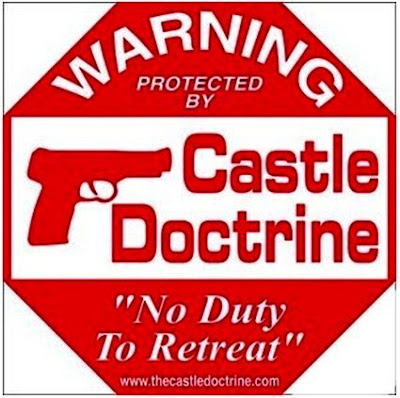 This is not a simple issue of "self-protection" or "might makes right" [aka "survival of the fittest"] but one of deep ethical decisions by individuals that may not be capable of swiftly evaluating a threatening [?] situation. Some situations are quite clear and others are not...and the consequences are final.
"Oklahoma mom kills home invader: Why the law was on her side"Sarah McKinley, an Oklahoma mom who shot and killed a knife-wielding intruder, was cleared of any wrongdoing by prosecutors on Thursday – vindication of the 'castle doctrine,' proponents say.by Patrik JonssonJanuary 5th, 2012 The Christian Science Monitor
Sarah McKinley, the Oklahoma mom who shot and killed an intruder after asking a 911 operator if it was okay to shoot, was cleared of wrongdoing Thursday. Also this week police declined to bring charges against a Pennsylvania man who killed a romantic rival with a bow and arrow. And in South Carolina, a woman who shot a homeless person squatting in an empty rental home was also not charged.As these cases show, the so-called “castle doctrine” is being tested in a variety of new ways, as states have steadily expanded the rights of citizens to protect their homes and property. After Florida's passage of a castle doctrine law in 2005, 31 states followed suit and now protect the right of homeowners to defend their property from intruders. And the expansion of such laws continue.Washington State is currently debating whether or not to add a castle doctrine law, North Carolina just expanded its law to include vehicles, and Pennsylvania last year expanded its law to include porches. Ohio passed a law last year expanding its castle doctrine to include business property, and now allows self-defense even in cases where an intruder is unarmed.Common law in non-castle doctrine states also protects homeowners from prosecution for standing their ground in their own homes.The reasons for having castle doctrine laws vary. Some states cite post-9/11 security concerns or the perceived vulnerability of domestic abuse victims. Others point to a distrust in the criminal justice system. Still some point to political motives that would expand gun rights.Debate continues in the legal community about whether expanding castle doctrine to more public areas has a deterrent effect on crime or whether it makes society more dangerous.“There is a wide range of potential outcomes” to expanding castle doctrine, according to a 2007 report by the American Prosecutors Research Institute. “People may feel 'safer' because they have a right to defend themselves in more situations. On the other hand, people may feel less safe because of uncertainty about who might be carrying a weapon, who might interpret behavior as threatening, and the potential for the use of deadly force.”Opponents also say castle doctrine laws are unnecessary because there are few, if any, recorded cases where US prosecutors have charged anyone engaged in self-defense of their home. Over 600 criminal defense lawyers opposed the new Ohio law on the grounds that “malevolent, reckless or paranoid people who shoot trick-or-treaters or repairmen on their porch will be presumed to be acting in self-defense.”Pennsylvania's expansion of the castle doctrine to include porches was tested this week as prosecutors declined to bring charges against a Somerset County man who confronted his wife's drunken boyfriend outside his home, after the boyfriend had left a message saying he was going to kill the husband. After repeatedly telling the boyfriend to leave, the man, Carl Wooley, Jr., retrieved a bow and arrow from his house and shot the boyfriend in the chest, killing him."What we want to make clear here is, this is a very limited factual situation, and this deals with a situation where there was an assault or an attack on the porch attached to the residence,” police said in a statement.Spartanburg, S.C., police this week cleared a couple of any charges relating to the shooting of a homeless man who had been squatting in one of their empty rental homes. Visiting the unit, the couple found the man, asked him what he was doing there, and the wife eventually shot him when he refused to stop approaching them. The man, Gregory Wells, survived the gunshot and was booked on unlawful entry charges after he was released from the hospital. He had no prior criminal convictions.In Montgomery County, Pa., a new case shows how muddled castle doctrine defenses can become. Prosecutors are now trying to sort out whether the state's newly-expanded self-defense law applies in a case where a woman called her ex-husband and son to help her deal with her boyfriend after they'd had a fight. After the ex-husband and son cornered the boyfriend at his car, he fired, injuring the ex-husband and killing the son.“The determination of whether this homicide is justifiable will be determined by a legal analysis of the facts of the event and of the 'stand your ground' provision of the newly enacted 'Castle Doctrine' Act," the district attorney's office said in a news release.Castle doctrine laws came to the forefront this week after a 911 operator in Oklahoma told an 18-year-old mom, Sarah McKinley, to “do what you have to do to protect your baby” as two men, one wielding a knife, broke into her mobile home. The woman used a 12-gauge shotgun to kill one of the intruders. The only murder charges in the case have been filed against the second man who fled. Under state law murder charges can be brought against accomplices in cases where someone is killed during some criminal activities.“It was either going to be him or my son,” Ms. McKinley told Oklahoma's KOCO TV news station. “And it wasn't going to be my son.”
Posted by Mercury at 6:08 AM