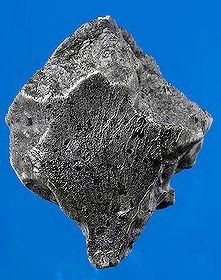 This handout photo provided by Darryl Pitt of the Macovich Collection shows an external view of a Martian meteorite recovered in December 2011 near Foumzgit, Morocco following a meteorite shower believed to have occurred in July 2011.
"The rarest things on Earth ... worth 10 times more than gold"January 18th, 2012The Sidney Morning Herald
Scientists are confirming a recent and rare invasion from Mars: meteorite chunks from the red planet that fell in Morocco last July.This is only the fifth time scientists have confirmed chemically Martian meteorites that people witnessed falling.The small rock refugees were seen in a fireball in the sky six months ago, but they were not discovered on the ground in North Africa until the end of December.Advertisement: Story continues belowScientists and collectors of meteorites are ecstatic, and already the rocks are fetching big money because they are among the rarest things on Earth.A special committee of meteorite experts, which includes some NASA scientists, confirmed the test results on Tuesday. They certified that seven kilograms of meteorite recently collected came from Mars. The biggest rock weighs over one kilogram.Astronomers think millions of years ago something big smashed into Mars and sent rocks hurtling through the solar system.After a long journey through space, one of those rocks eventually landed on Earth.It plunged into Earth's atmosphere, splitting into smaller pieces, and one chunk shattered into shards when it hit the ground.This is an important and unique hands-on look at Mars for scientists trying to learn about the planet's potential for life.So far, no NASA or Russian spacecraft has returned bits of Mars, so the only Martian samples scientists can examine are those that come here in a meteorite shower.Most other samples had been on Earth for millions of years, or at the very least for decades, which makes them tainted with Earth materials and life.These new rocks, while still likely contaminated because they have been on Earth for months, still are purer and better to study.The last time a Martian meteorite fell and was found fresh was in 1962. All the Martian rocks on Earth add up to under 110 kilograms.The new samples were scooped up by dealers from those who found them. Even before the official certification, scientists at NASA, museums and universities scrambled to buy or trade these meteorites."It's a free sample from Mars, that's what these are, except you have to pay the dealers for it," said University of Alberta meteorite expert Chris Herd, who heads the committee that certified the discovery.He already has bought a chunk of meteorite and said he was thrilled just to hold it, calling the rock "really spectacular."One of the principal decisions the scientists made on Tuesday was to connect these rocks officially to the July fiery plunge witnessed by people and captured on video. The announcement and naming of these meteorites - called Tissint - came from the International Society for Meteoritics and Planetary Science, which is the official group of 950 scientists that confirms and names meteorites.Meteorite dealer Darryl Pitt, who sold a chunk to Herd, said he charges from $US11,000 ($A10,697.79) to $22,500 an ounce, and he has sold most of his already. At that price, the new Martian rock costs about 10 times more per ounce than gold.
Posted by Mercury at 4:11 AM